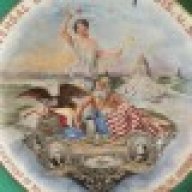 So our house was originally built in 1857 by people who had just came over from England with lots and lots of money; they already had family here in this area who had fought in the Revolutionary War. They were timber and cattle barons. The family mansion underwent a full restoration in 1907 by one of the heirs; it was "Victorianized" somewhat at that point and "updated" to 1907 Gilded Age standards. It remained in the same family all of it's life until about 18 years ago when the last descendant passed away here(she was 103). After she passed, the property was abandoned and left vacant for the next 15 years until we purchased it(we're now in the process of a rather large, cash-draining restoration). Of course I want to find the old privy and dig it(it's never been done), so that's top on the list. But here's another possibility - there is a well out beside the old carriage house that could contain some bottles. The lid opens up to reveal an opening about 3 1/2 ft in diameter; plenty big enough for a person to get down into it. I shined a flashlight down in it and it's about 5 ft down to the water, which is very shallow(looks like a sandy/silty bottom). It opens up to a diameter of roughly 6-8 ft at the water level. So my question is, could this old well be safely dug for bottles? Is this a common practice in the bottle collecting world? Is it even worth the effort?

Old wells are sometimes dug for old bottles but those are usually of the filled-in variety. You'd have a pretty difficult time digging a well that's still got water in it, although I guess if the bottom is stable you could muck around in the first foot of silt or so. I'm sure a privy would be a much better bet for finding bottles.
S

in most cases the only reason they wood put some thing down there besides a pale , would to keep something cool. like milk. so maybe a milk bottle or jug. and seeing that this folks were rich they most likely had better ageing mints . don't bother.

If it opens up bigger/wider as you go down maybe it's a cistern? I dug a 15 foot deep well not long ago & did get some Bottles. It was filled in with dirt to the top. Not many Bottles but did get a nice Cobalt Blue Guyette Detroit Hutch at bottom. Could be something in that but if not already filled in maybe not? I think you'd be better off looking for the Privy but then if your like me you'd allways be wondering what could be in their? LEON.
H

I would say not a well... a cistern is more likly.
Seeing as it hasn't been filled in I would say it could have some early stuff in the sediment.
Are the sides brick and mortar lined??
If so get a trash pump and drain out and start moving muck.
Clean it out and line the walls with wine racks...

It actually could be a cistern. I just wonder how deep it actually goes though? I'd really hate to get down in there and sink up to my eyeballs lol
I think I am going to get down in there at some point; like you guys say, I'll always wonder what's down there if I don't. I'll probably wait until cooler weather though so the spiders and snakes won't be so happy to see me.

I don't think Cisterns get that deep, I never dug one but know of 2 or 3 I want to dig & seen some empty ones befere that were not that deep, not deep like a well. LEON.
G

you gotta do it now..or it will drive you nuts not knowing haha!
H

Get a long probe and test it.
The one I dug was about 10-12 feet deep with a solid brick bottom and walls.
B