CanadianBottles said:
Yeah the crown/blob finish is odd. I have two theories for that - one is that they used a lightning stopper but wanted the option to switch over to crown tops at a later date. The second theory is that people had come to associate that exact form of bottle with Weiss beer, and they wanted to keep it looking as similar as possible when switching closures. This is something you see with those Irish round-bottom ginger ale bottles, which continued having quite rounded bases even after they were made to take crown caps and were able to stand on their own. Since lightning stoppers worked on standard crown top bottles, I'm leaning towards the second theory.
Click to expand...

I do like your theories CanadianBottles.
I cannot prove this, but I know that it took special tools for the glass company to make a CROWN TOP lip. The key to the lip finish was it HAD TO BE precise for the cap to fit correctly. In the early day of the CROWN TOP these tools may not have been readily available so the glass company made due. I don't have a photo of it, but I have had beers with what looked like a cork top blob with the crown lip on the top similar to the Willms beer. I know for sure there are HARTMANN & FEHRENBACH bottles floating around that have this oddity.

I have been thinking along the same lines in that certain beer bottles, especially Weiss beer bottles, might be the missing link that explains the unusual crown/blob finishes. Its highly possible they were specifically designed to accommodate a variety of different closures. Of particular interest are some of the John Graf beer bottles. Its ironic that Graf's main brewery was located in Milwaukee, Wisconsin - which is also where the Willms Bros. were located. I just this morning began my study of Graf bottles, and plan to continue my search and see what else I can find. I am particularly interested in trying to figure out how to date them.

I do not know when any of these bottles were made - John Graf was in operation between the 1870s to the 1960s. Notice what appears to be a fairly substantial "overhang" that might have been intended for a wire attachment. 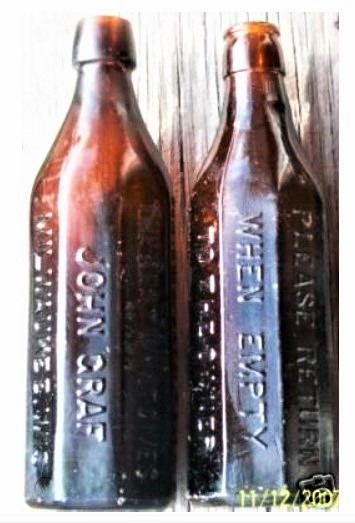 I realize this is not a Crown/Blob bottle, but because I have seen several Graf bottles with this identical closure, I suspect it might have been their standard closure at some point. Not to mention that it could just as easily have been used for the Graf Crown/Blob bottles I posted earlier.

I have David Graci's bottle closure book - The best match for this particular closure was patented by ...

This link is to the 1875 Quillfeldt patent 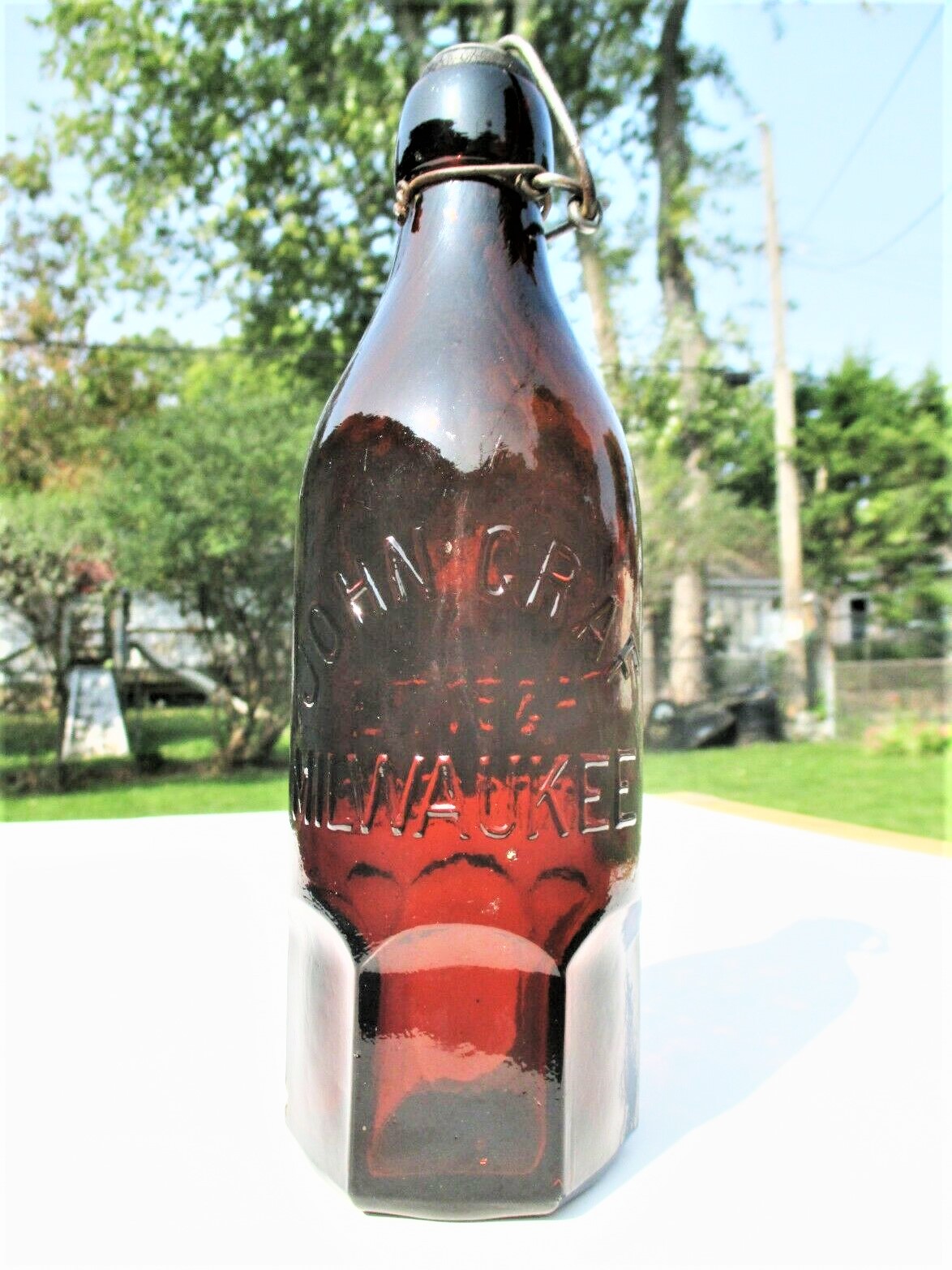 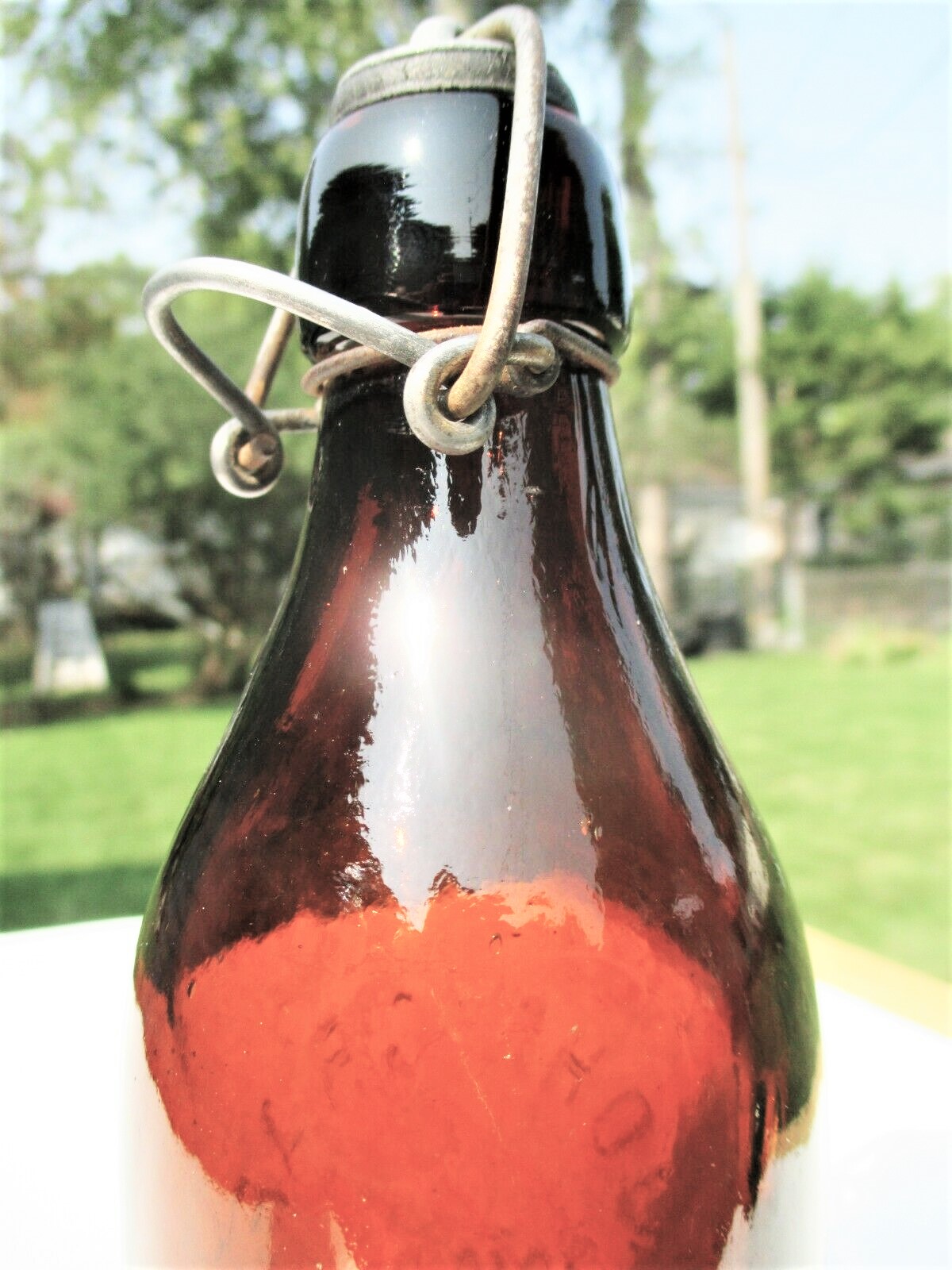 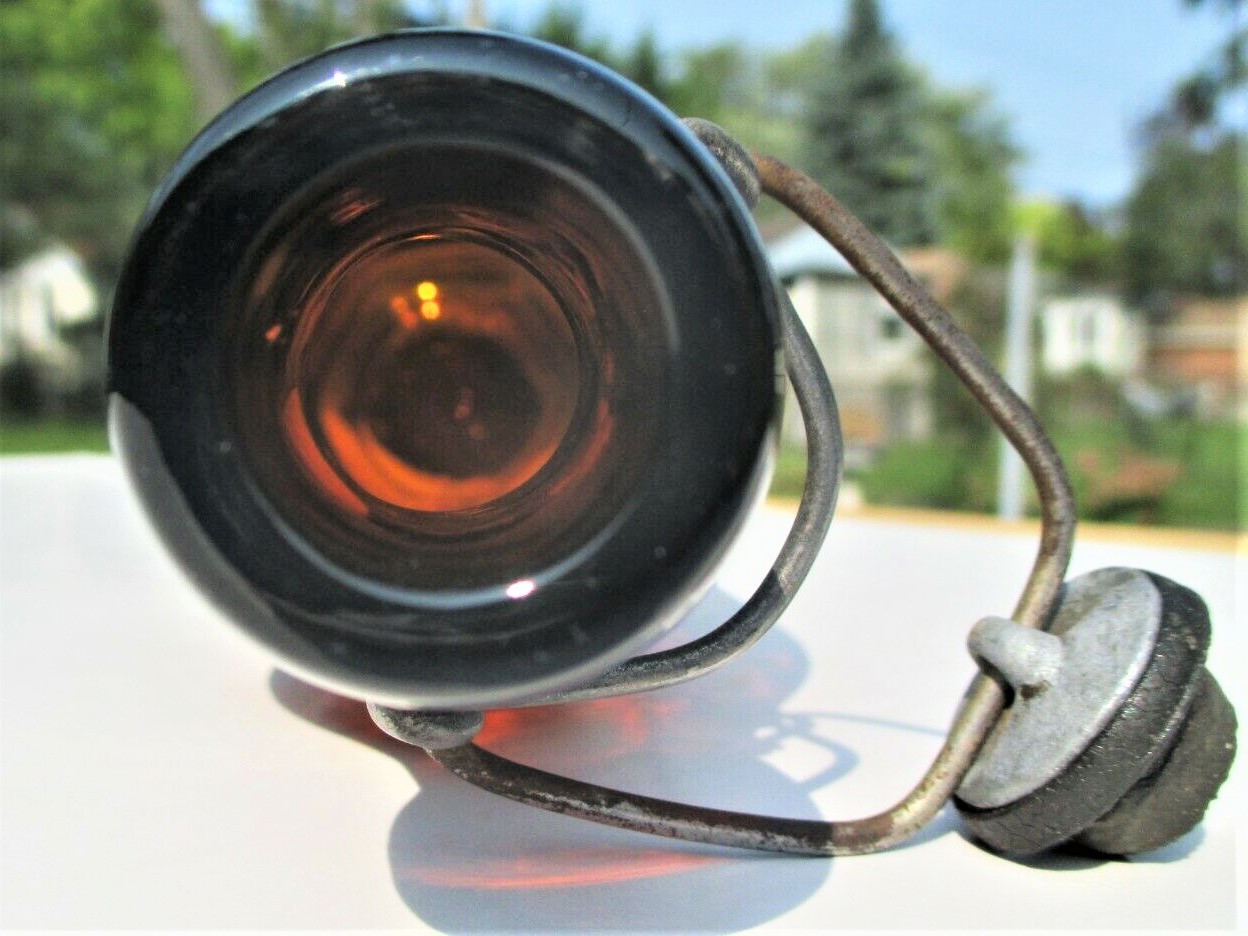 And there is this from here ...

This Graf bottle is currently on eBay and has one of the closures I have been discussing. However, I'm still not sure if this particular type of closure was standard for the John Graf Brewing Co. Now all I need is to find a similar closure on one of his or the Willms Bros. Crown/Blob bottles. ??? 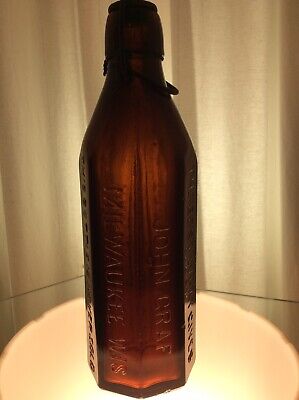 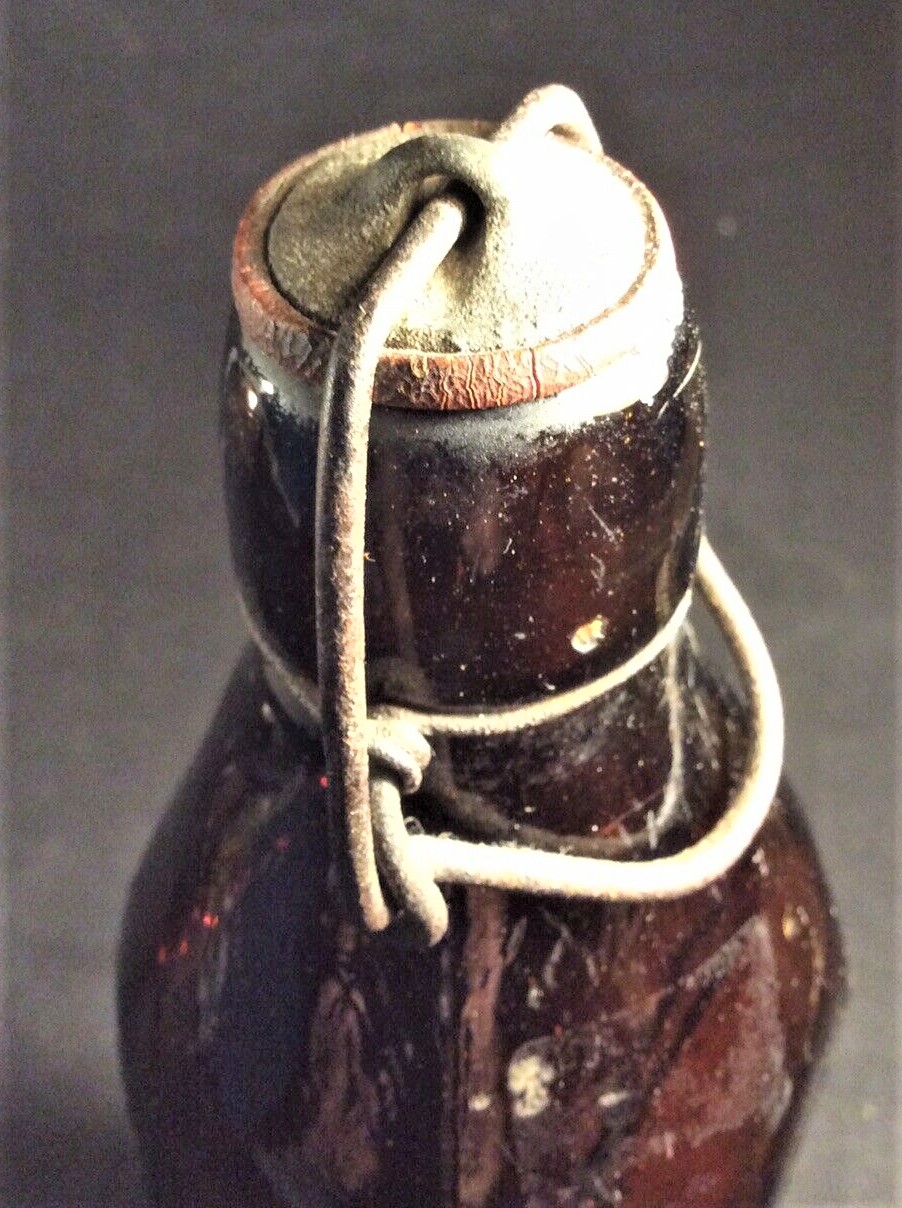 SODABOB. If you go over to Mr. Bottle website and look at the crown top soda bottles from Milwaukee there are two Graf picnic soda bottles that look like the blob/crown top that have a lightning stopper that are porcelain.

Bob, from talking to Ron I came away with this info, Puerto Rico & Mexico purchased old used Hutchinson equipment in the 1920's from the USA because by the 1920's most USA Bottlers have already made the switch to Crown Tops. He also said after WW1 the use of Hutchinson in USA was uncommon although a few still did use them. SO, I guess you could say they still seen widespread use in Puerto Rico & Mexico in 1920's but not widespread use in USA. That's kinda like saying the Codd bottle is still widely used, Maybe in India & Japan but I don't think they made a Codd for widespread use in USA for about 100 years. LEON.

shotdwn said:
SODABOB. If you go over to Mr. Bottle website and look at the crown top soda bottles from Milwaukee there are two Graf picnic soda bottles that look like the blob/crown top that have a lightning stopper that are porcelain.
Click to expand...

Thanks - I am familiar with the Mr. Bottles website and found some of the bottles there that I posted earlier. Here's the link - type a brand name in the search box and it will pull up the corresponding matches

Attached is the Graf (Picnic) bottle that I believe is the one you were referring to. I'm also attaching the finish on UncleBruce's Willms Bros. bottle to compare it with the Graf beer and Graf soda bottle finishes. Although the three finishes might not be 100% identical, they are similar enough for further discussion.

I suppose the question that needs asking is ...

How many of us think these three finishes are the so called Blob/Crown finish? 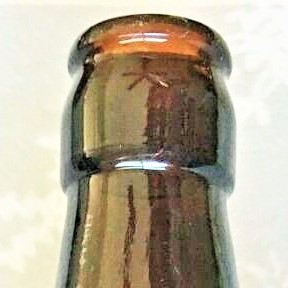 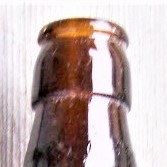 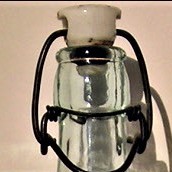 I wonder of these had anything to do with the so called Blob/Crown finish?

This closure was primarily intended for after-market use to seal a variety of small-mouth finishes such as those on beer, soda, catchup, etc. bottles - to keep the bottle sealed whenever the contents were not immediately consumed. As far as I know, they were not applied to bottles where the various products originated. I have seen numerous examples of these caps with the brand names printed on them. 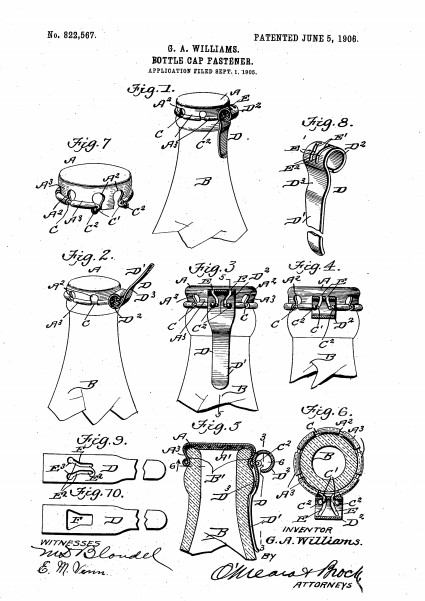 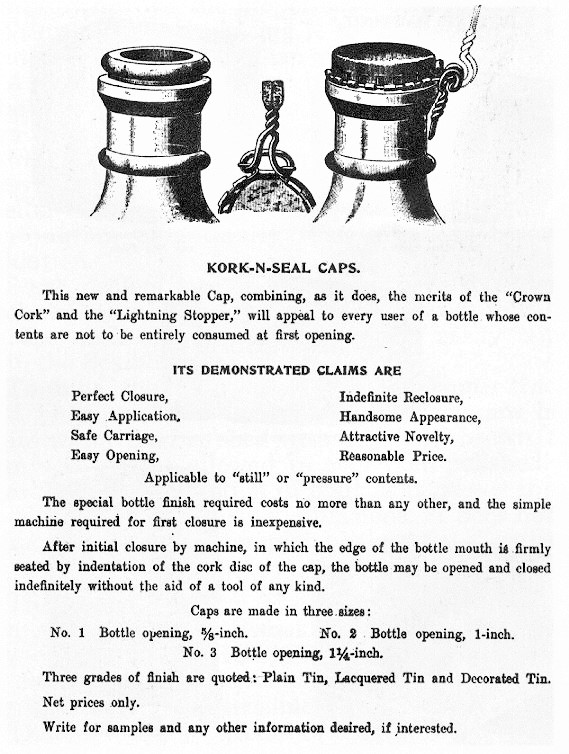 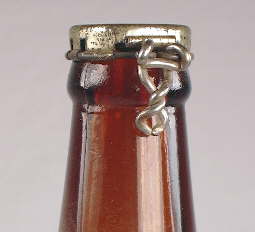 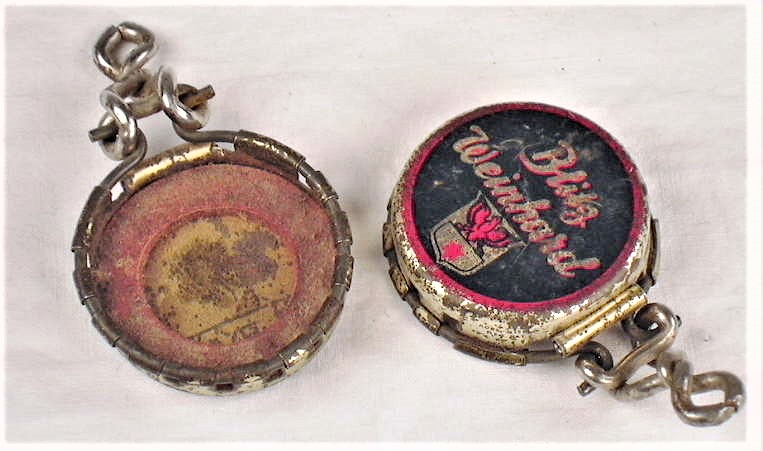 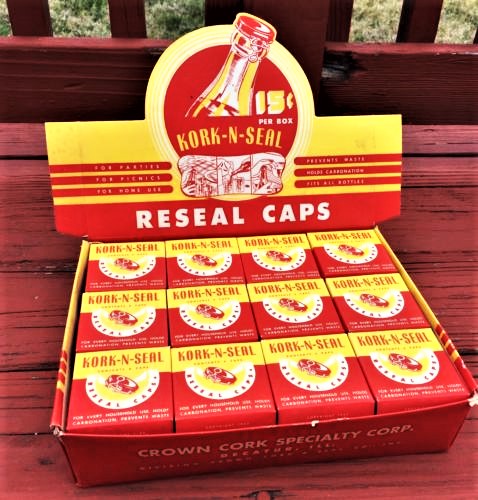 Notice the Goldy finish just below the Crown finish on this page from a 1920 Illinois Glass Company catalog. It also depicts the Kork N Seal cap - that apparently had it's own finish - but cannot be seen. The Goldy finish is somewhat similar to the so called Blob/Crown finish. By the way, there are no known examples of a Goldy cap. If you have or find one, please share it here and you could be the first.

Hmmm ... I also wonder what the Crown and Brandy finish is all about? 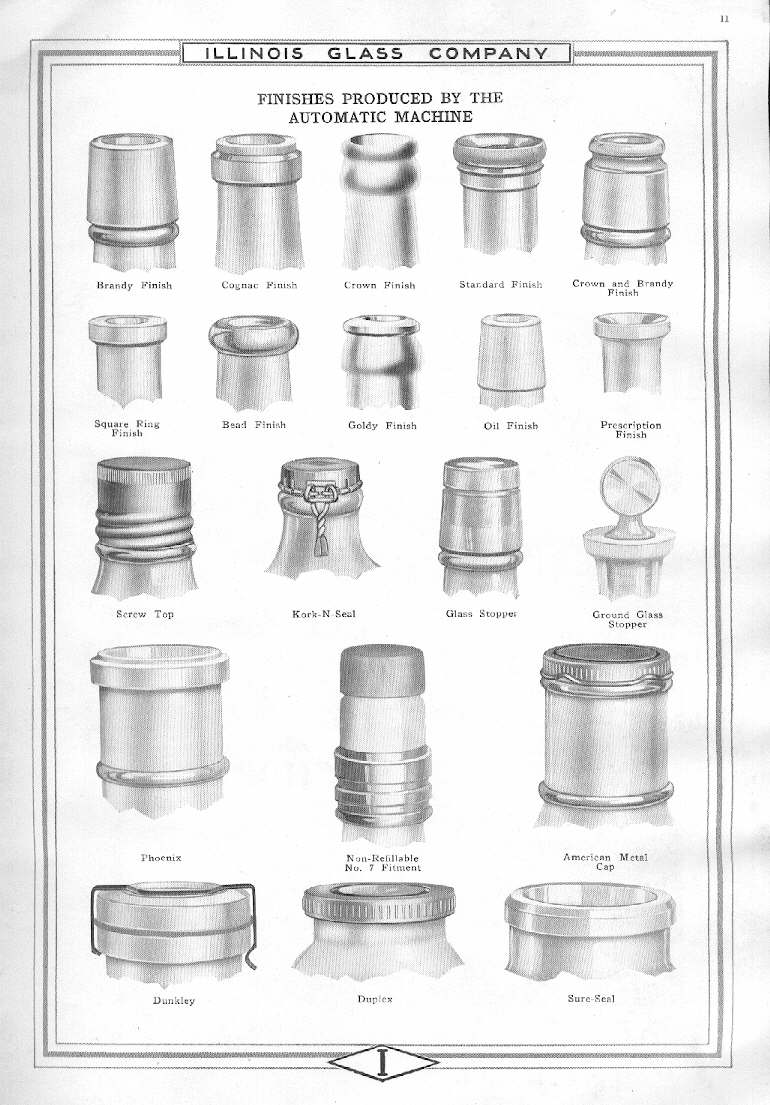 This is the only illustration of a Goldy cap/closure that I have been able to find. But, with no known examples, I don't know if they were ever actually used. 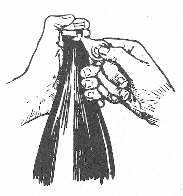 Here is my question on Kork-N-Seal cap as they would apply to the use on the blob/crown bottle top. If the blob/crown top used a lightning type bottle seal, either porcelain or rubber, wouldn't you just reseal the bottle with the original stopper? In the event it used a totally different original seal then the Kork-N-Seal could be a possibility but I believe the Kork-N-Seal was mainly an after market product.
You must log in or register to reply here.