My research sez Painter started working on this invention in 1885 but didn't get it perfected or patented until 1892.

hemihampton said:
My research sez Painter started working on this invention in 1885 but didn't get it perfected or panted until 1892.
Click to expand...

He invented several closures one notable other was the BALTIMORE LOOP SEAL. Here are a few of his other patents. 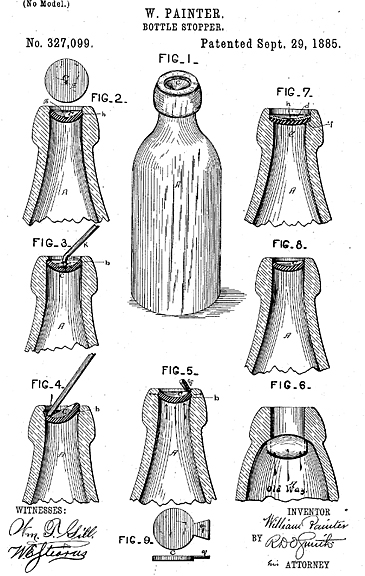 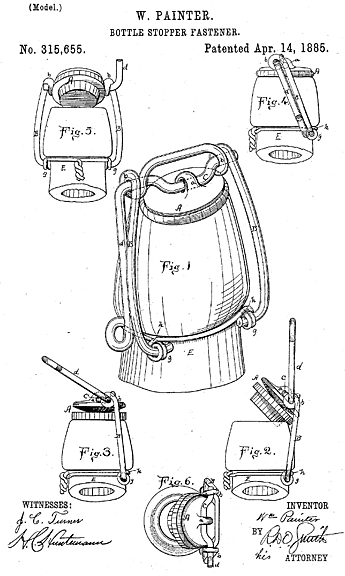 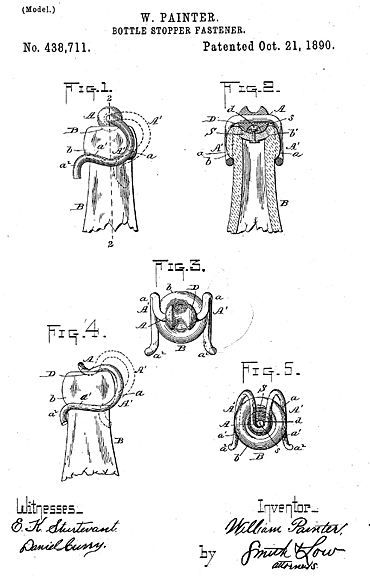 I was referring to the crown top when I said that.

P.S. Painter had 85 patents under his name.

hemihampton said:
I was referring to the crown top when I said that.

P.S. Painter had 85 patents under his name.
Click to expand...

That Painter boy was busier than a long tailed cat in a room full of rocking chairs. 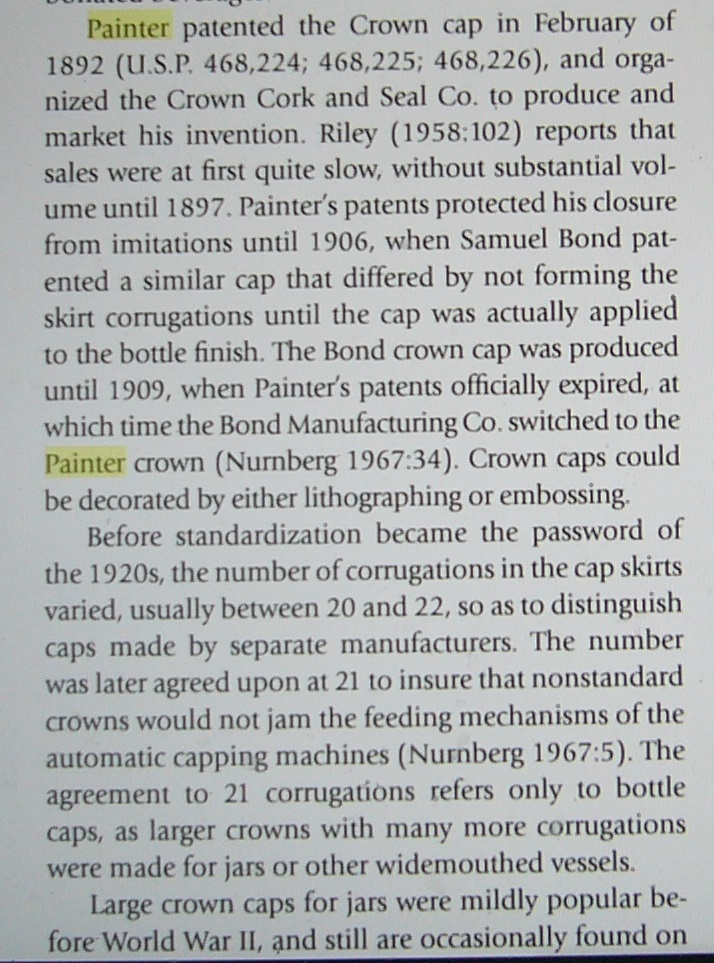 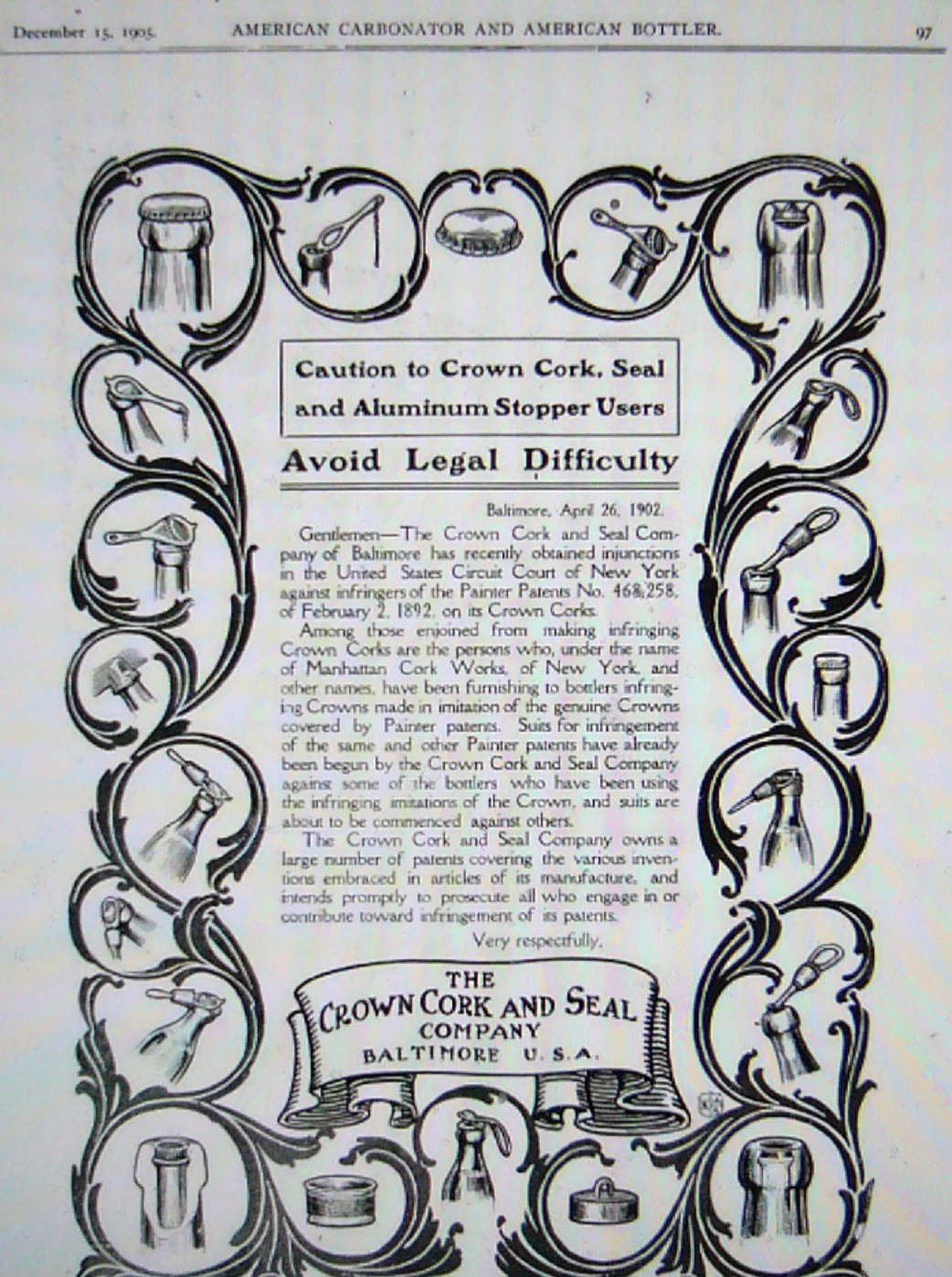 SODABOB said:
I also found this today. Notice what it says about "England" - which supposedly is where the Crown finish originated before William Painter patented his cap in 1892

Re-read my post #253 and you will see where I said the "FINISH" (which is part of the bottle) supposedly originated in England. I wasn't referring to William Painter's patented "CAP." It would be easy to assume that the Finish and Cap were designed and patented simultaneously - although I have never seen or heard of a patent for that particular bottle Finish.

This link is to the original patent - where you will find the information in the attached snippet.

Its a bit like what came first; The chicken or the egg? But in this case its, which came first, the Crown bottle or the Crown cap? In other words, I have heard for years that the Crown bottle/finish originated in Europe - and specifically in England - and that William Painter designed his cap to fit on bottle types that already existed. But, whether this is 100% accurate or not, I can't say with certainty. I researched this in the past, but never found anything conclusive. So, let's all take another look and see if we can find anything. If we do, it will likely be a first.

See what y'all think of this and we will discuss it later ... 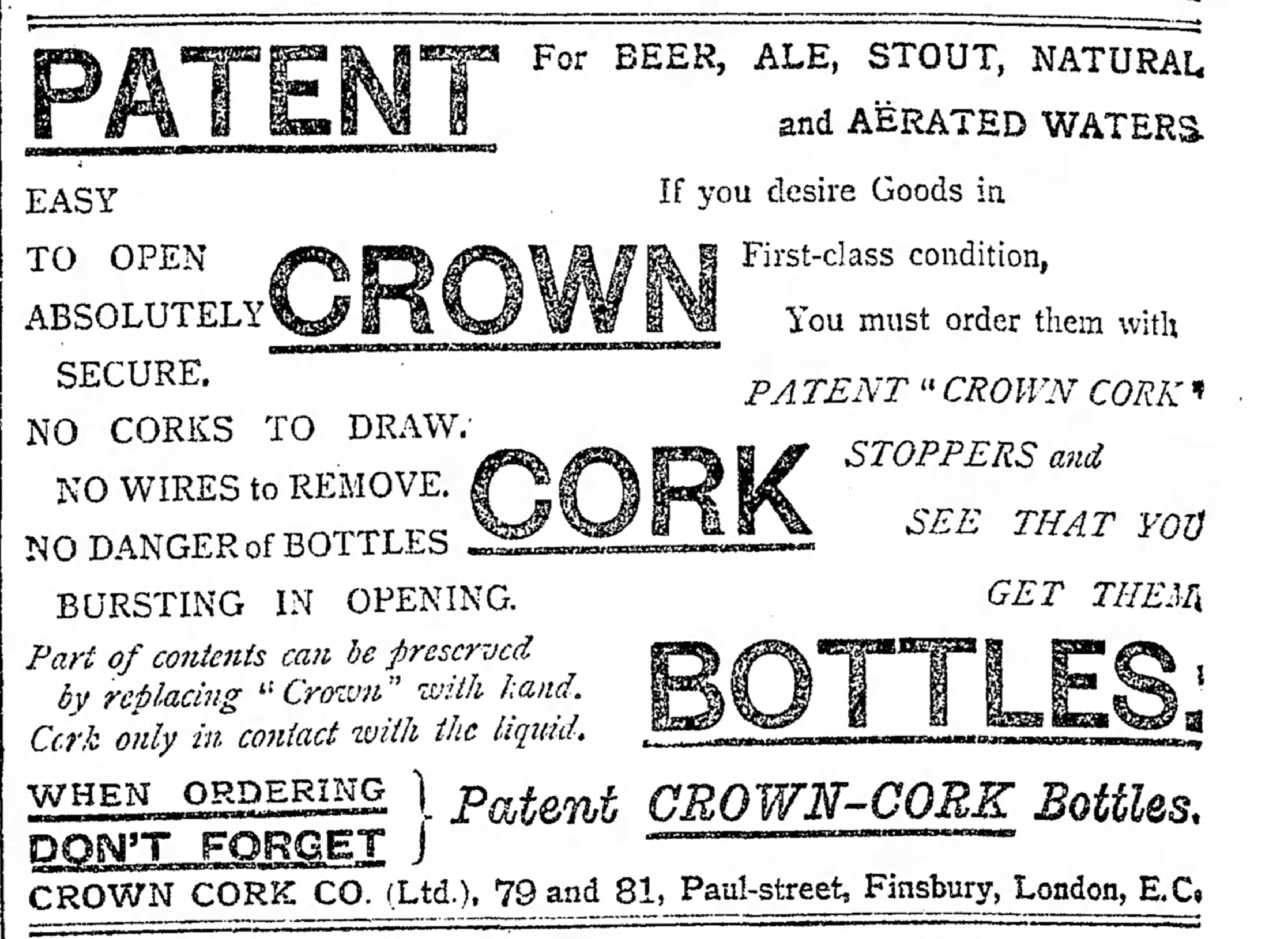 Notice my Ad here sez Patent in US & Europe. 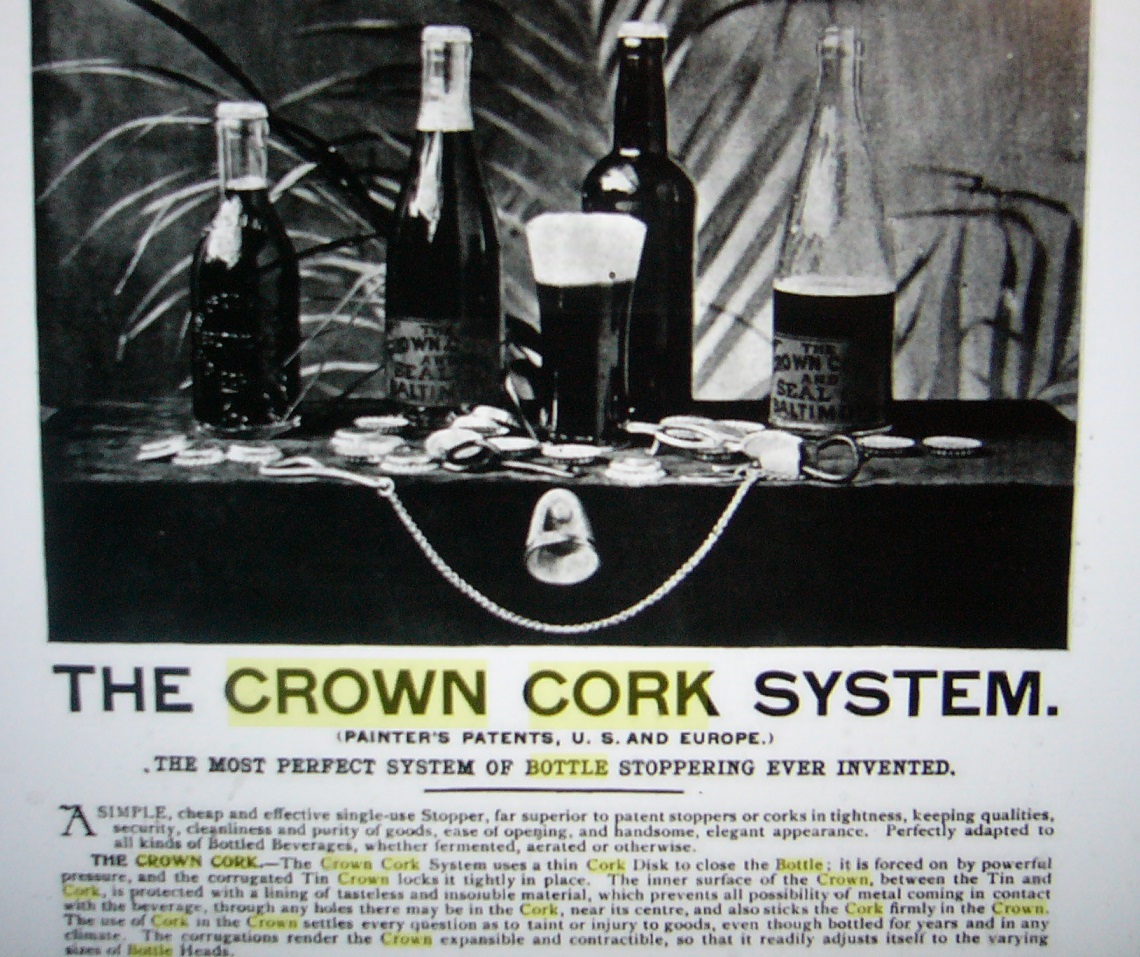 I will address the crown FINISH bottles later, and see if we can figure out once and for all whether they originated in Europe or the United States. For now I want to focus on the 1893 King's beer bottle with the crown finish and crown cap. I found dozens of the King's beer bottles, but could not find one with a paper label like the one in the 1893 ad - which depicts a picture of a bottle on it. I can't say for certain, but it's possible that that particular label was only used by Joseph F. Higgins in Hartford, Connecticut. Notice at the bottom of the ad where it says he was the "Sole Agent." That means he was a distributor and/or seller, but did not actually bottle it. This is confirmed where it says "These different brands of export bottlings are prepared only at the brewery." Notice on the bottle label where it says "Continental Brewery - Boston." I did some brief research on the brewery, and it appears they were in operation between about 1877 and 1900.

Like I said, the only example of a paper label with a bottle on it I could find is in the 1893 ad itself. There were dozens of identical ads - all of which were published in the summer of 1893. I really don't know if that particular label was exclusive to Joseph H. Higgins or not. The problem is that most ads don't include illustrations of their bottles, and are what I call 'line' ads with not artwork. I also looked through some ads from Boston, but the earliest one I could find that included an illustration of a King's beer bottle was from 1900. However, it depicts a different label. That particular label is on a lot of the King's bottles I have seen. Check out the King's bottle that is on eBay. Even though its a blob bottle, it has a paper label like the one in the 1900 ad. Its definitely King's bottle, as you will see on the base embossing.

The long story short is, of the dozens of King's crown-top beer bottles I have seen, the one I am attaching is the only one I have been able to find that might be pre 1900. Of course, there is no way of knowing for certain if the label is original to the bottle - and only suggesting that it might be. What I like best about it is the crown finish itself - which looks kind of odd and is not what I would call a typical crown finish. But, who knows. Without a date mark or some other type of marks, its really difficult to determine when the bottle was made. It would have to be examined in-hand to try and determine that.

So, even though I can't say with certainty if the bottle I found is pre-1900, I suppose its as good a place to start as any. After this I'm going to research the Meyer beer bottle from Georgia and see if I have better luck with it. 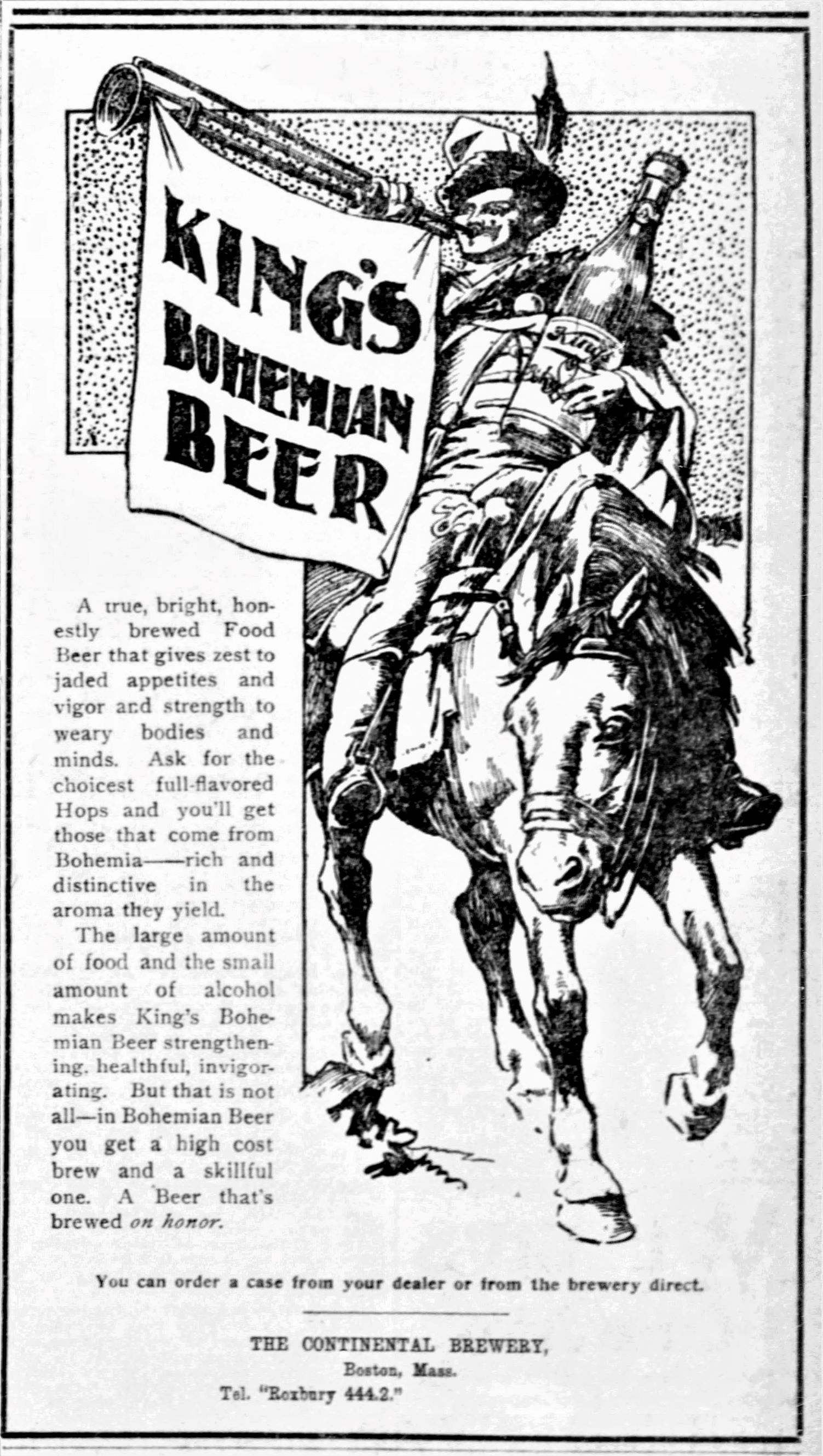