These are the only 2 I have dug and that was 10 yrs ago. 1st is a 10 oz second is a 6 oz. Does anyone have any info or old ads they could share. Any other city's bottled this product. I am going off info from an old member ( RIP ) Capsoda he said it was a spicy/ hot flavor. Any thoughts would appreciated. Sam

Those are great i like the slant script on them. Hope it is not another unsolved mystery. Thanks for the picture.

I got it DFW Digger. The electric ginger ale was this. Electricity passing through oxygen creates ozone. Ozone kills bacteria. It was a ozone water treatment.
Go to Www.peachridgeglass.com and search "Electric bitters and electrified ginger ale" the first result with "were they really zapped or was it just quackery" will answer all your questions. P.s. very interesting history! Thanks for the mystery. ROBBYBOBBY64 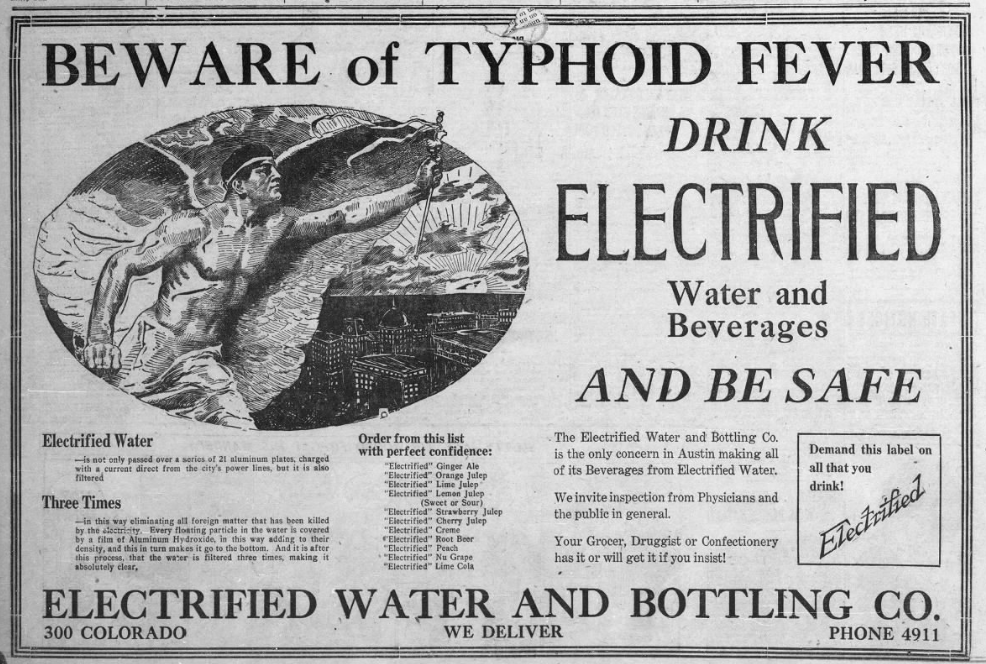 Thank you all very much for that info and ads. Always wondered and 10 yrs ago there wasn't as much on the internet. Really like the script on bottles. Thanks again.
5

Very nice bottles.
I like, "The average man can make his wife do anything she wants to."
Preliminary note, further research pending....The Electrified Water Company seems to have been a 'national' company, where based I'm not sure, that licensed distributors in various locations. I have one such 5-gallon bottle, same slanted script, made here in the LA area by one of the smaller glass companies in 1925, and newspapers.com references to Electrified Water Co. in LosA between 1923 and 1940.
I have seen several variations on the details of the embossing, likely from different areas.
Locations included Los Angeles, Dallas, Louisiana, Kansas -- and likely many more - as I say, am just beginning to research.
Yes, the theory was that ozone was produced, which killed germs. It think that it does, but whether enough in the E W Co process, I know not. Might be only enough to make their cilia stand up!
Attached are images of some of the Electrified Water 5-gallon bottles (not mine).

DFW Digger said:
I am going off info from an old member ( RIP ) Capsoda he said it was a spicy/ hot flavor.
Click to expand...

I am sorry to hear of Capsoda's passing. I used to visit this site somewhat haphazardly when I worked and before I had my own laptop--computer lab at Fort Lewis was not that convenient--and I remember reading some of his postings fondly. If I remember correctly--it might have been another member--he had a stream that was crossed by an old railroad trestle that just kept on yielding boodles of bottles and the majority were sodas.

There was another member, whose name I cannot recall at all, who was digging an extensive old hospital dump that produced a great variety of late 19th century bottles. I really enjoyed his adventure write-ups and photos too. Have not seen similar posting since I retired and got to viewing the forum more regularly
Last edited: Oct 16, 2021