Hi everyone. It’s been a while, and I’m not really sure why. Anyway - found this at an antique store for a not bad price. Condition is pristine. Anyone know anything about it? P. Fitzsimon, 293 Front Street New York.

Hello bottlecrazy, Ginger Ale Collector here, otherwise known as Ken. You have found what I think is a quite rare ginger ale bottle! While I haven't gone and searched the business records for 1885 in New York, I can add a twist to the Fitzsimons story. First, in all of my years collecting ginger ales I have never heard of, or seen your bottle. However, I have an identical bottle with two exceptions: 1) Mine is "J." Fitzsimons, not "P.", and 2) Mine does not have the 1885 date. 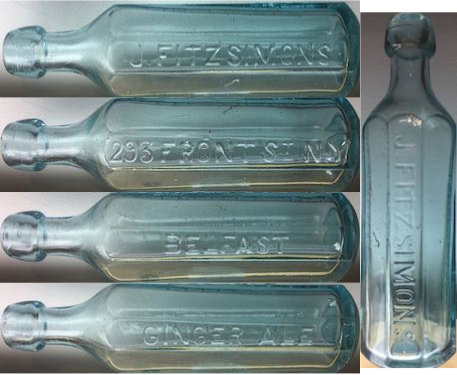 Now, to add more to the story, I have a "ginger ale" shape bottle (see clip from North American Sodas & Beers site) that is embossed J. Fitzsimons 51 Willet St New York. (The bottle is buried in a box somewhere in the garage, so no pic of that one.)

Your specific bottle is not listed on North American Sodas & Beers (nor are either of my Fitzsimons', only because I haven't got around to sending the information to the website owner, my friend Tod von Mechow). However, completely different shaped P. Fitzsimons' bottles are listed:

So, were P and J Fitzsimons related? More research needed by someone who wants to dig through 19th century NY business directories and obituaries. Thanks for posting.

Hey Ken. I was hoping someone with your expertise would come along, but was beginning to despair! Thanks for the great info. Yes, our 8-sided Fitzsimons bottles are identical except for the 1885 and the P. instead of the J. I'm glad to hear mine might be uncommon, if not rare - or even better, unique!

By curiosity, were you at the 1994 Baltimore bottle show? I sold a ginger ale there to a collector for a song that I dug back in the '70s with my dad and have kind of regretted ever since. Feel free to PM me about that and/or working something out with this bottle.