How do you find old bottles in creeks and rivers?

I always was curious as to why there are bottles in the rivers. How did they get there? When people finished using them did they just throw them in, or did the dumps dump them into the river?

I always found this real interesting and I would like to try a river dig. How do I know where the spot in the river would be good for digging? Also, I have located an 1840s-1860s man-made canal that has since dried up. Would there be any luck there?

Any information is great! Thanks
J

Try a steel probe in the canal muck....People have always thrown bottles into water....Kids to target practice, etc....Out of sight out of mind, yea,..also some dumps do wash into rivers....Welcome to the forum...
J

A lot depends on the location. In my area the Des Plaines river is a relatively shallow river, which just happened to pass through several Toc picnic groves. Over the years hundreds of bottles were thrown into the river by picnickers. Lighter medicines whiskies and their ilk tended to be carried off by the current. Bottles such as hutchinsons, crown top sodas and beers which were heavier usually went to the bottom. This was also true of bottles that were still mostly full of "whatever" someone put in them. Sometimes these would sink directly into the silt at the bottom where they stayed. Else they would be carried along the bottom until they found a resting place. I have found many bottles both up, and down current along large rocks. Most rivers have s bends, so the current will take from one bank and deposit on the other. Recently due to the drought, and the removal of 2 small dams, the river level dropped by about 4 feet in some areas. It was fun it exposed a lot of bottes in about 7" of water on the deposit side of the banks and nothing on the other sides. Lots of crowntops from the teens to the 40's, and a few hutches. So in summation, in general look for areas along rivers that had heavy shore use, or passed through older settlements. Keep in mind though that many rivers are routinely dredged in heavy use areas. Best of Luck.
S

wow J.dinets great answer, stated very well.
I have good luck in rivers and creeks, before trashmen. Things were thrown over the banks into the rivers and rivers edges ,along withall the other reasons J.dinets said they can be very productive. Great for embossed bottle most clean up like new, normally any paper and painted labels will be worn off and faded badly but not always. Have found some painted labels in very good condition. The thing with rivers is that they are constantly upchucking things that may have been burried. After a storm you can check a spot that had no bottles before , and next thing you know some surfaced on the rivers edge or laying on the bottom waiting to be picked up. heres a recent post showing some bottles I found. The rivers are low and some were just the base sticking out of the side of the river banks.
https://www.antique-bottles.net/forum/had-a-little-to-go-out-im-my-Kayak/m-539039/tm.htm

i haven't had that much luck in creeks and rivers , there is a good place to swim near my house and its been a park for years and has an old bridge . only found a couple broken pop bottles so far and old beer bottles . there could be more stuff down stream but it be very difficult to get to . 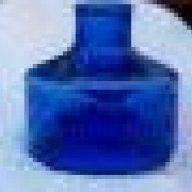 With Scuba gear...Look for a section of your community that has the oldest houses lining the banks of a small river, canal, creek...you get the picture. If you do not know how to dive you can always snorkle, have a pair of kevlar divers gloves and get looking. All of those houses before the advent of trash removal threw all of their household trash into the river because it floated away out of sight. If you have good visibility you will find a lot more than just bottles. You will find dishes, silverware, coins, buttons, pipes, doll parts, stoneware and modern trash to include hazmat too. Be aware of your surroundings, let someone know where you are and have fun. All of my bottles and artifacts come from underwater, I do not dig on land. Oh and don't forget the marbles, they are everywhere.

Here is a sample of one of my dives from a river.

Using a pitchfork as a probe, increases your chances by 3. []
P

Flaskman......All good information......except......for God's sake don't try diving for bottles with just a snorkle.....Don't get me wrong...there are certain situations when a snorkle may do....but if you get tangled in fish line, hung on a spike in a collapsed warf, the list goes on! SCUBA cost's more but allows you to deal with "the problem" with several breaths of air.....not just the one....watch your pressure gauge to know how much air you have left....get out when it's unsafe to stay down (recommended 500lbs) in shallow water & good vizzz maybe longer.

From what I've read, Riverdiver has a ton of experience....I know that to be true.

I'm just concerned for your saftey.....I have worked commercially underwater for years.....be careful.
A

what is a good product for cleaning neoprene? 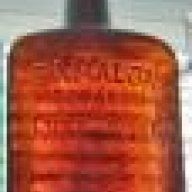