This one is interesting! S. Larnac. Here’s what I could find on this primitive bottle that’s so whittled…. I think there’s a bunch more in a box, that look about the same age but are unmarked crude early bottles. It’s in nice shape for its age! It’s rare enough there’s precious little to find, so far, but check what did find? I hope I find more, but so far, nothing but this, pretty much.. this is the stuff I love about collecting!
sssssssssssssssssssssssssssssssssssssssssssssssss

Rare Western 1860s "S. LARNAC" Applied Seal Wine Bottle
I’ve often suspected these were a Western product because of where their found and some recent research may confirm that. This is a free blown wine bottle with an applied seal the reads: “S.LARNAC” on the shoulder. Has an applied ring & sheared lip, circa late 1860s. The entire bottle is loaded with seed bubbles & swirls throughout, just beautiful. Non cleaned, shining glass with no stains or wear.

In 1868, Wine merchant Adrien Chauche of San Francisco filed a trade mark for the "LARNAC" wine label pictured. The date of this filing is very close to the context the bottle was found in, late 60s. The few of these I know of were all found in Northern California. This one was recovered from a huge sand filled 1860s pit in San Francisco several years ago. I note a couple of scratches and a bubble blister on the shoulder as shown. The crude snap lip has lite chips which is pretty much normal for the way these are made.

I think that’s the fun part of both digging bottles and getting auction lots. You just don’t know what your going to find…. it’s an education, researching everything!

And while that article didn’t mention it, this bottle has an inside threaded closure.

Applied seals I don't see many of those out my way. That is a real solid find and highly desired - hold on to it, don't sell or trade it. Is it a pontil kick up base?

Sure looks like it. Winner, winner, chicken dinner!
ROBBYBOBBY64.
C

That's very cool! I didn't know anyone in the US was using applied seals that late. I would have assumed that it was European.

slugplate said:
Applied seals I don't see many of those out my way. That is a real solid find and highly desired - hold on to it, don't sell or trade it. Is it a pontil kick up base?
Click to expand...

it does!
It’s pretty crude! 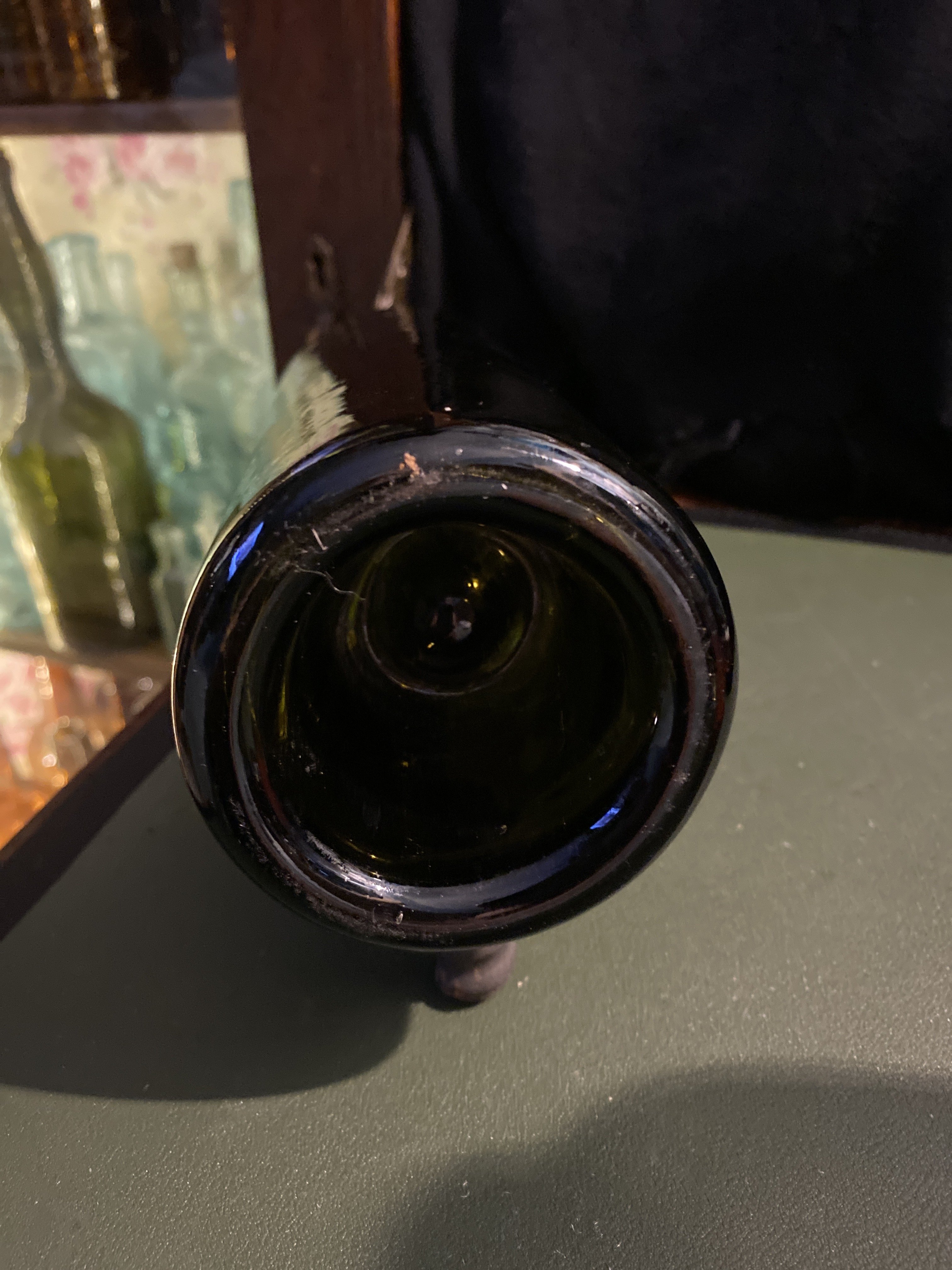 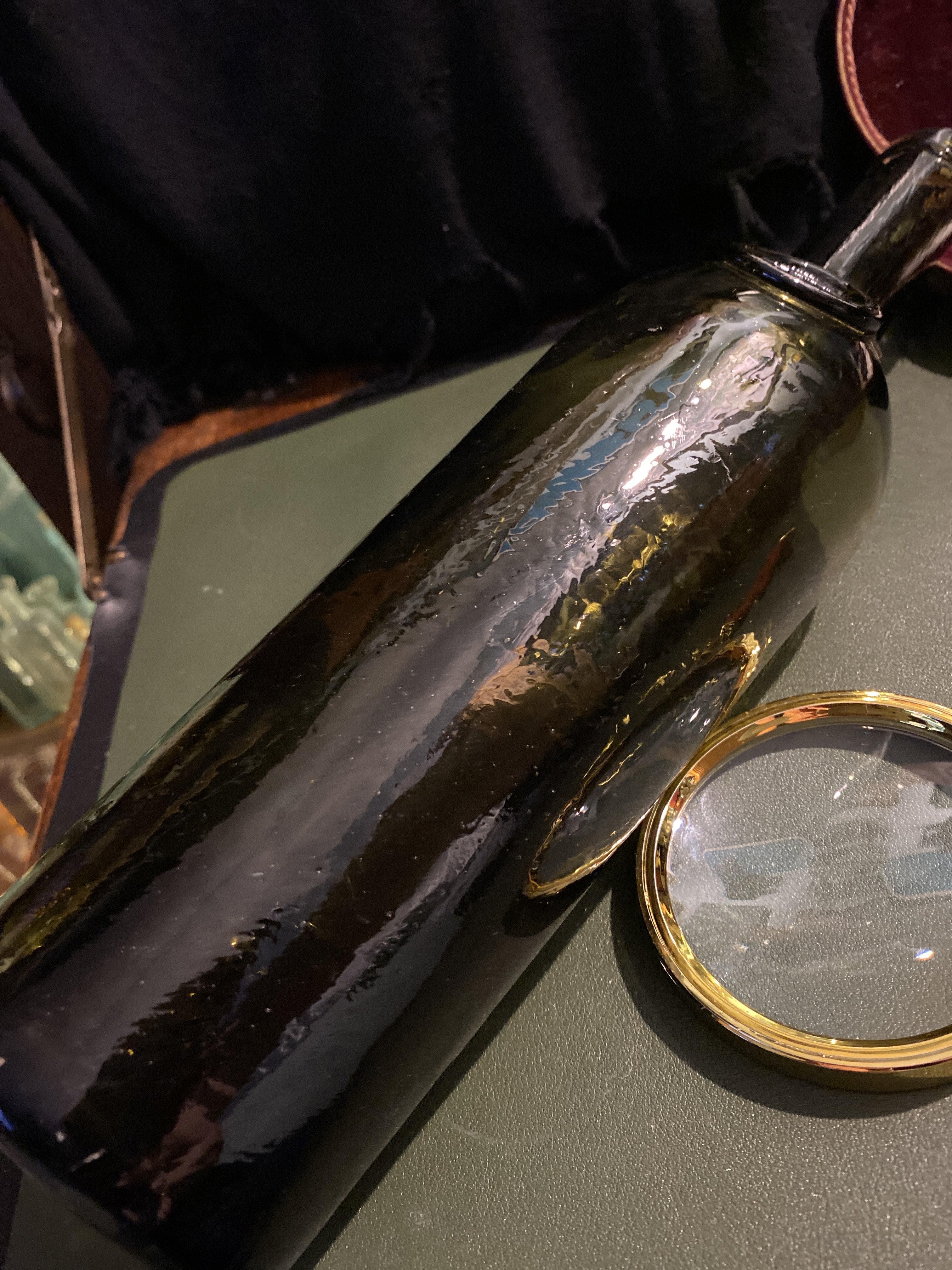 Additional info at http://www.westernbitters.com/2018/07/western-or.html (from which some of the above was taken) -- including an opinion that the wine was likely bottled in France, rather than shipped in bulk and bottled in SF. Opinion.

......and an advertisement in the San Francisco Examiner, attached. (The only "S. Larnac" match, nationwide, in newspapers.com.)

Re Adrien George(s) Chauche (and multiple city directory entries, and other info available on ancestry.com):

Attached a combined marriage and death/burial notice. He 59, she 27, ?"married" April 21st, the day before he died, to be buried April 25, "the day before the time fixed for his wedding." Somewhat confusing, and definitely unusual!

Not sure if this helps much to sort it out, where the bottle was made, but every tidbit adds interest, n'est-ce-pas?