Lines on a bottle, flaw or not?

sandchip said:
They are what I call "gather lines". You'll notice on many examples that they run generally in a spiral from bottom to top and, albeit rarely, on good a example, you can see where it starts on the bottom of the bottle, which would be where the apprentice/assistant clipped the glass as the gaffer withdrew the blowpipe from the batch. When the blowpipe is inserted into the batch of molten glass, it is rotated to accumulate the desired amount of glass on the blowpipe, which is then rolled on the marver to make the gather more uniform before inserting into the mold. Some subtle change in the glass occurs during these stages that slightly changes the hardness of the glass in these areas, which sometimes becomes more pronounced after years of exposure to chemicals in the soil. I've heard them called "ground lines" but I've seen them on many, many bottles that were never buried. Hope this helps.
Click to expand...

I agree with sandchips explanation, the bottles being in the ground/privy make the lines more pronounced.

Straw Marks or Lines: Straw marks are hair fine wavy lines on the surface of the body (and/or neck and base) glass that can be alone or in patterns. These very fine lines are physically "etched" (for want of a better term) into the glass surface and can be felt as a sharp "tick" or "catch" when running ones fingernail across the surface. There appear to be at least two reasons for straw marks on bottles, either of which are hard to tell apart without knowing something about the origin of the bottle itself and which may be related to each other anyway. 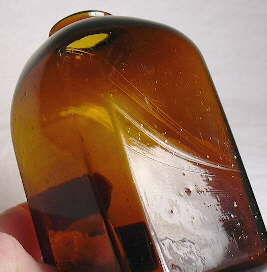 The early American snuff bottle pictured to the left has various straw marks running around the sides and shoulders (none on the base). This bottle was produced in a dip mold as there are no mold seams visible on the bottle though it has obvious form shaping that was largely impossible to do this well freehand. This bottle is believed to have never been buried (i.e. has wear on the base from sitting somewhere for a long period and the provenience of the item) so these type of straw marks are likely related in some way to the production process. This most likely was a function of the way the glass was made (the batch components) or the way the batch was mixed (incompletely?) though it could also be due to some unknown effect of the gathering or blowing process or possibly related to the weathering of the glass surface by a humid atmosphere over time (see next paragraph). Straw marks on never buried bottles have only been observed by the author on earlier mouth-blown (pre-1870s) bottles although this may be a skewed sample as earlier bottles were more valuable to reuse and thus discarded less often than later ones in the 19th century. This would proportionally increase the opportunity of surviving to the current day without having been buried. Also see the unusual variation of straw marks pictured in the "Other glass imperfections" section below. 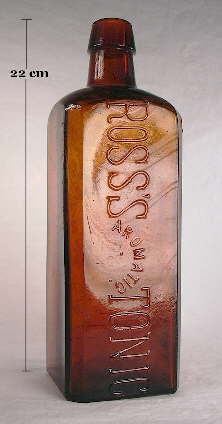 ​
The other "type" of straw marks seem to be induced by a variably lengthy burial in the ground and the chemical weathering reaction between the soil and glass surface. These straw marks appear to have little or nothing directly to do with production process of the bottle although they could be related to the incomplete mixing of the components of the glass batch noted earlier. In any event, these are likely connected to the chemistry of the glass. Glass is made primarily of sand, soda, and lime with the water soluble soda content being the part that is easiest to be leached out of the glass by contact with soil and moisture. (This is called patination or staining and is covered later on this page.) These swirls are related to that deterioration though the exact reason for their conformation is unclear (Kendrick 1963). If related to the way the glass batch was mixed (incompletely) then the etching may be swirls of less mixed soda being leached from the glass surface faster than the other components.

The bottle pictured to the right is a Ross's Aromatic Tonic. This ca. 1880 medicine bottle was definitely buried and excavated since it was heavily stained and subsequently "polished" to remove most of the staining although the straw marks remain. It has an assortment of straw marks running around the sides of the bottle which show in the upper part of the embossing pattern. In a side by side comparison with the snuff bottle above, the straw marks look essentially identical.

Whatever the cause, there are no particularly useful dating opportunities related with straw marks (and patination in general) since they can be found on mouth-blown (buried or unburied) and earlier machine-made bottles that have been buried. However, straw marks seems to be more common on mouth-blown items than machine-made, though that is likely just a function of time and the effects of it on glass. Earlier (pre-1930s approximately) machine-made bottles tend to weather faster than earlier mouth-blown bottles due to a higher soda content of earlier machine-made glass composition and chemistry which was necessary for proper feeding into machines (Kendrick 1968).

I never understood how or where the term "straw marks" originated. Doesn't look like straw at all, at least to me. I still believe the cause is one and the same, formed during the rotation of the blowpipe during the drawing of the gather from the batch, whether or not the bottle ever came in contact with soil. Mr. Lindsey dances around the cause in the second paragraph, but never seems to reach a firm conclusion. Sometimes the obvious is the most difficult to see. He does have a very informative website for beginners, but it shouldn't be accepted as gospel in its entirety.
Last edited: Oct 6, 2022

I like sandchip's "gather lines" which is more descriptive than "Stresses induced into the metal...." I think these lines are present, but masked by the smoothing action of the mold, in many or most hand-blown bottles. The lines are occasionally evident in non-buried bottles.
The gather lines are often evident when a bottle is affected by various organic acids after burial. The mold-induced smooth surface is etched, revealing the twists which resulted from gathering and marvering the metal.
It would serve the collecting community if we could suppress the misnomer "straw marks" in favor of "gather lines." 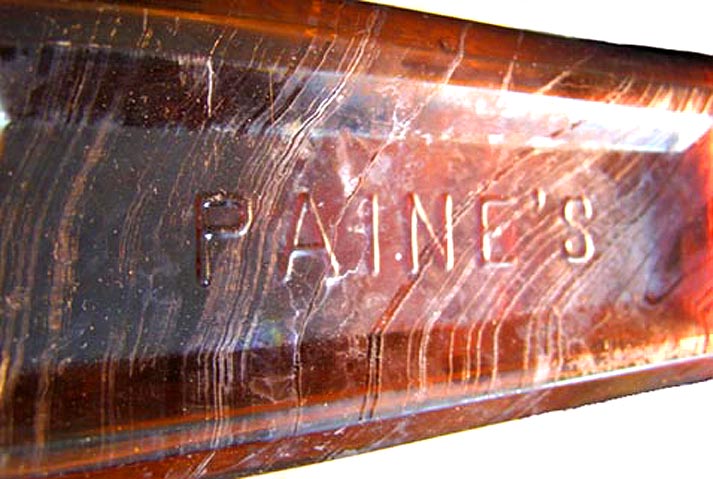