Sorry, Just read your email and know about the last bottle! Thank you for all of your help and advice!
Jennifer Pabst 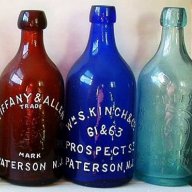 The last Brown one to sell on Ebay sold last year for $5.99, here are the details...

Jennifer did you ever see this Bio??

The Pabst Family. Christian Pabst, for years one of the well-known business men of Hamilton, and long a public official, whose services in various civic positions reflected credit upon himself and his community, was born December 6, 1853, in Bavaria, Germany, and was twelve years of age when, in 1866, he accompanied his parents to the United States, the family settling at Hamilton. Here he completed his schooling, following which he began to learn the trade of printer, serving his apprenticeship with L. B. DelaCourt. For a time he was job compositor in the office of Jacob Long, of Hamilton, and eventually became known as one of the city's expert job printers, a line in which he had much success and in which he continued until 1879, when he joined his father and brothers in the manufacture and bottling of mineral waters and soft drinks, under the style of J. Pabst & Sons, a concern that did a large and profitable business and which bore an excellent reputation in business circles. While he was prominent in business affairs, however, it was probably for his public service that Christian Pabst was best known. From his youth he had been interested in public matters and had been a staunch supporter of the Democratic party. In March, 1892, he was nominated as clerk of the Butler County Common Pleas Court, and was elected the same year for a term of three years. In 1895 he was again nominated to succeed himself. His nomination by the democracy of the county was equivalent to election, yet his signal triumph at the polls was beyond the most sanguine expectations of either himself or his friends, as he received the largest majority ever given in Butler county. He did much to systematize the work of the office of clerk of the court and gave the people a clean and intelligent administration. Mr. Pabst was nominated and elected to the office of county auditor in November, 1900, taking office October 21, 1901, and in the election of November, 1903, was chosen as his own successor. In 1907, his party placed him in nomination as a member of the board of public service and he was elected, holding that office for two years. In 1910, Governor Judson Harmon appointed Mr. Pabst as a member of the state tax commission for a term of three years, and Governor James M. Cox reappointed him in 1914, but in 1915 he resigned the office in order that he might devote all of his time to the bottling plant of The J. Pabst Sons Co. Throughout the time that he was the incumbent of public office he was extremely popular, and his record was one upon which there was not the slightest blemish. Mr. Pabst was always a staunch supporter of the public school system and did much to elevate its standards, and generaly speaking, is a booster for the city of Hamilton. In 1882 he was chosen one of the trustees of the Lane Free library, a position in which he was retained for many years. Fraternally he was also well known, belonging to the Benevolent and Protective Order of Elks, The Modern Woodmen of America, and other fraternal and social societies. With his family he belonged to the German Evangelical church. April 15, 1896, Mr. Pabst married Catherine A., daughter of Peter Gerlach of Cleveland, and to this union there were born three sons: Robert P. and , twins, born November 12, 1898; and Herbert G., born March 15, 1901.

You'll also need to be on the lookout for this "Ten Pin" example...[]

How do you find completed listings that old?

How do you find completed listings that old?
Click to expand...

Keep an eye out for old newspapers for great big ads like this one...I imagine you might be able to find such a thing on Ebay...

Biggest pic they had, sorry...

Great article, I have read it before! I am amazed how many things have been shared about the family.
Herbert died in the war, Robert (Warren's twin brother) died a couple of years before Warren.
Warren gave Greg (my husband) the pocket watch of Christian Pabst which has a locket attached containing pictures of the twins! It is amazing and believe it or not...still works
They were a pretty interesting family. Warren's wife; Elvira was an artist and Graduated Smith College, her father was an architect/engineer and designed many buildings and homes around Ohio.
There is so much history with every family. I have concentrated heavily on Greg's family because our children never had the chance to meet any of them with the exception of Greg's sister. This is my way of keeping them fresh and important in their lives and also my way of showing my husband how important he is to me! We can learn a ton from history if we put it into perspective!
J

How do you find completed listings that old?
Click to expand...

Keep an eye out for old newspapers for great big ads like this one...I imagine you might be able to find such a thing on Ebay...

Biggest pic they had, sorry...

You are killing me with these! What a cool ad. I have an alert set up for anything Pabst, Pabst Hamilton and simply Hamilton Ohio through ebay so every time a new listing is posted I get an email alert.

Here are a bunch of bottle caps, but I have my doubts about the ones with the little guy holding up a bottle on them, they may have been from when Pabst Brewing sold soda during prohibition...