Found this strange 3-sided poison today...two flat stippled panels, ounces/CC graduations between the two flat panels, and a round back (similar shape to the ubiquitous 1920's amber poisons). Bottle has design patent No 104574 on the base and was made by the Obear-Nester Glass Company, St. Louis, Mo...that design patent was issued in 1937 so it dates to around that time. Anyone seen one before? 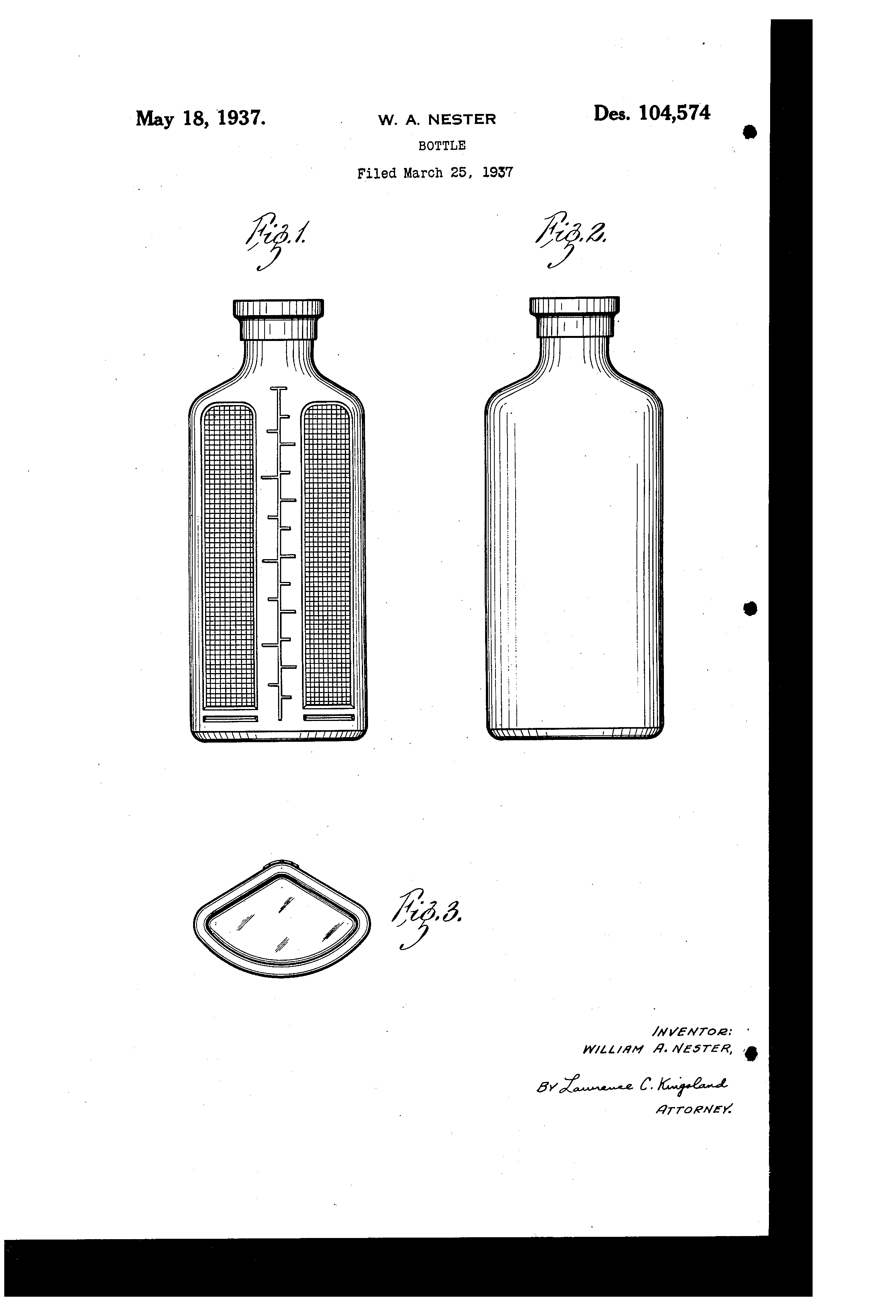 Not sure...just seems like it would be odd to go to such trouble to make a mold like this for a simple pharmacy bottle...plus the similarity to the other 3-sided poisons.
J

I have three of the above POISON bottles in my collection. One is 1 oz.(3 1/2 tall) the other is 8 oz. (6 5/8 tall) and both are ABM cork top bottles. They both have only the checkered design in both left and right front panels. I also have 4 oz. (5 1/2 tall) screw top ABM bottle. It has a black bakelite cap with the words "THE/REXALL/STORE" inside of a shield ACLed in white letters on it. The right front panel is embossed in the checkered panel "FROM THE" the left hand panel is embossed in the checkering "REXALL/DRUG STORE". It has 2 labels on the back. Red lettering on a white label. The bottom label (2 1/4 by 1 3/4) reads "GROUP 1 / POISON". it has a skull & bones on the left & right side of the word "POISON". The antidotes are on the rest of the label. The upper labe l(2 1/4 by 1 1/4) reads "BENZINE/ DANGEROUS/ KEEP AWAY FROM HEAT OR FLAME". On the left of the label is the shield with the words "THE/REXALL/STORE". The center reads "PHELPS DRUG STORE/ R.E PHELPS/ NORTH SIDE SQURE MARTINSVILLE, IND./PHONE 825". Too me I think this pretty well proves this style of bottle was used for POISONOUS CONTENTS only!!!
S

jerry2143 said:
... Too me I think this pretty well proves this style of bottle was used for POISONOUS CONTENTS only!!!
Click to expand...

Christmas Eve greetings, Jerry, I'm not a poison guy, so let me ask you some dumb questions. Did Rudy Kuhn classify this as a poison? Anecdotally, I had understood that a Poison bottle, should contain the words, "poison" or "poisonous" embossed in the glass, or ye olde skull & crossed bones. Is this not always the case? Mr. Nester the design patentee, describes it as a "prescription" bottle. Being that he was one of the principals of Obear Nester Glass Co. I should think he would have chosen his words carefully, and that restricting it to the poison only category would limit it's use. Here's an older thread on a Dawson's Benzine with an interesting discussion: https://www.antique-bottles.net/forum/Dawson39s-Benzine-m443760.aspx Is Benzine, in fact, poisonous? I understand it's flammable and explosive aspects. It seems to have uses in the pharmaceutical industry apart from it's use as a medicine bottle, or instrument cleaner. The land of Great Cheese and Beer

There are several characteristics to a poison bottle. The obvious POISON and Skull embossing are not the only ones. This bottle may or may not have been designed to have poison in it. But, it's design allows it to swing either way. Fortunately, Jerry has labeled examples showing who put what in it. Even though Rudy put together the standard to Poison bottle identification, not everything he put into the books was correct. Changes have been made over the years. Many were added, some were removed. This particular one, I do not have in my records, but mine may be incomplete. Should be a KV-?.
J

Hi Surfaceone, I hope you and your family are having a wonderful CHRISTMAS DAY!!! In response too your thread on the PHARMACY bottle in question. After reading your last post it dawned on me the point you are trying too make. I also beleive like you do that the bottle was designed for any pharmacy or drug store too use at their discretion as a PHARMACY bottle. It was a universal bottle designed for any company too use unless they had their company name embossed on the bottle such as THE REXALL STORE!!! I beleive the reason the bottle is not in RUDY'S BOOK is that it had not been discovered at the time RUDY did his books. I am just guessing but I would say the bottle was probably made in the 50's or 60's being ABM. The first one I ever came across showed up about a year and a half ago. I also beleive it came into existance shortly before bottles trasitioned from embossing too paper labels and screw tops only too save money on the manufacturing cost of the bottles. I still beleive the bottle was mostly designed for poisonous contents. You have too admitt that it would cost more too add the cross hatching as too leaving it off. It still boils down to how the particular pharmacy or drug store wanted too use it. As far as BENZINE goes it is a by product of coal tar. I don't think I would want too take the risk of drinking it. Undoubtably THE REXALL STORE thought it was poisonous and did not want too take the chance of being sued over it so they put a POISON and ANTIDOTE label with the BENZINE label on their personal (THE REXALL STORE) bottles. All poison bottles do not have a skull & bones or the word POISON or POISONOUS on them. They may have vertical or horizontal lines, dots, diamonds,cross hatching ,xxx's,etc.. They also read embossed USAGE EXTERNE, EXTERNAL USE,FOR EXTERNAL USE, EXTERNAL USE ONLY and NOT TO BE TAKEN. All of these examples can be found in RUDY'S BOOK. I am like Stephen (POISON-US ) I think it deserves a KV# and should be listed as a KV-1 variant. I personally still beleive it was designed for pharmacy and drug stores to dispence POISONOUS products out of!!! HAVE A WONDERFUL CHRISTMAS and a HAPPY NEW YEAR!!!MAY GOD BLESS EVERYONE!!! Jerry 2143
S

Thanks, Jerry for your detailed response. When did Mr. Kuhn compile the book? Are all of your examples Obear-Nester made? I can see the shape similarities to some of the round back triangular poisons. I gotta believe that O-B would have offered this on the market shortly after the patent was issued. The stippled panels are unlike any I've seen on a poison previously. A most Deco design element, that stippling.

Are there recognized dual use, pharmacist/poison bottles abroad in the land?

i WAS JUST GUESSING AT THE TIME FRAME FOR THIS BOTTLE. I NEVER NOTICED THAT THE PATENT DATE WAS 1937 UNTIL JUST NOW . THAT COULD VERY EASILY BE THE TIME FRAME FOR THIS BOTTLE. I AM NOT SURE OF THE PUBLICATION DATES OF RUDY'S BOOKS. I WILL CHECK ON THAT AND GET BACK TOO YOU. YES! ALL THREE OF MY BOTTLES ARE EMBOSSED ON THE BASE "DESIGN PAT'D/ REX/ THE LETTER "N" IN A SQUARE /104574". I ASSUME THIS BOTTLE WAS NOT VERY POPULAR SINCE ONLY A FEW OF THEM HAVE EVER TURNED UP.
J

It took a while but I have the dates of RUDY'S books. Volume 1 was published in 1988 and volume 2 was published in 1989. RUDY had started a third volume but it was never completed. I assume the reason this bottle never appeared in RUDY'S books is that no one ever sent him a picture of the bottle for him too do a drawing of and give it a number. I have been told that RUDY had a large collection of poison bottles but all of the bottles in his books were not from his personal collection. As people begin sending him pictures of unknown poison bottles he started his books by making drawings and assigning each newly found bottle a KI number. I know it is a long time period between the patent date of 1937 and his first book in 1988. I assume this style of bottle must not have gone over very well with pharmacys and drug stores!!! The first one I ever saw showed up a couple of years ago.
You must log in or register to reply here.
Share:
Facebook Twitter Reddit Pinterest Tumblr WhatsApp Email Link