Almost twenty years ago, The Hallmark Channel aired a mini-series production of "Roughing It" that I remember enjoying immensely. I just searched to find if it is available for watching online.

Indeed it is! Here is a link to Part 1:
I highly recommend it to fans of history and humor. Despite liberal literary license that Mark Twain employed in his story telling, it is worth remembering the the young Sam Clemens actually made the journey he recounts.

Thanks for sharing the Mark Twain stuff. I'm on a long wait list for my next library hotspot, so it will be some time until I can watch it. My neighbors let me tap into their wifi, but it's a slow connection because of the distance.
N

Toma777 said:
As a kid I made that drive many times with my family. It really brings back the memories. I use to go up to the Twin Lakes area all the time with my father for fishing. We really liked the June Lake loop.

The last time I was in that area (2002) was with a girlfriend I met in Mexico (Canadian), and we hiked up into Panamint City outside of Death Valley. It was fun exploring the old mines with flashlights.

I went up to Panamint City a few years ago with my sister and mom. It's a rough hike these days but we really enjoyed ourselves and had the place to ourselves. It's incredible looking down that valley at all the rockwork and imagining a town there...and there was glass everywhere.

In 2002 we talked to the the man living at the base of the canyon going up to Panamint City, and he said the road had washed out a few years before, and jeeps could drive up to Panamint City on the road. He was living there with his elderly father, and he said he could never leave his place unattended because it would be looted.

In Panamint City we stayed in one of the old cabins, which had beds and a few things in the cupboards for visitors.

It was a rough hike for us also, and the valley was filled with grape vines. There was something in the creek water we were able to eat, although we probably shouldn't have because of all the mercury they used in gold mining.

We also went to an old ghost town above Bodie someplace, but I don't remember the name now. We were there in the late Fall, and it was so cold up around 10,000 feet elevation, we nearly froze to death at night. We actually burned cow pies to stay warm. My 5 gallon water bottle froze solid through and through.
N

The BLM banned Jeeps from going up there several years ago and the house at the base of the canyon was burned flat more recently I believe. Since the Jeeps don't go up there any more, the vegetation has really taken off in the canyon and it is a bit of a bushwack to get up there. We really enjoyed it though...the cabins are still up there and somewhat maintained for camping and there is clean water up there too. Here is a post from when I went up there:

I went for a little jaunt with my sister and my mother to Panamint City, California this past week. Not the easiest place to get to (pretty much a full day hike to get out there) but a fascinating place for sure. Lots of open mine shafts and tunnels, lots of ruins, lots of beautiful minerals...
www.antique-bottles.net
W

Toma777 said:
There was something in the creek water we were able to eat, although we probably shouldn't have because of all the mercury they used in gold mining.
Click to expand...

Okay, you've piqued my curiosity (it's not difficult to do). What did you eat: crayfish, watercress, fish or?

willong said:
Okay, you've piqued my curiosity (it's not difficult to do). What did you eat: crayfish, watercress, fish or?
Click to expand...

Inquiring minds want to know this!!!!

You got it with the second guess, watercress.

willong said:
Found a couple websites with the fire tale. I had forgotten that it was part of "Roughing It" a book I have read entirely once and revisit portions of on occasion. Perhaps that is where the Mono Lake account resides as well. Here's a link with partial fire account: https://wildfiretoday.com/2010/09/18/mark-twain-started-a-fire-at-lake-tahoe/

There seems to be some acceptance of Twain's fire as fact, even if liberally embellished.
Click to expand...

Yes, it did burn. Its weird-the last few times I went there, (I have to come from Reno, from regional cat shows) every time there is some kind of fire raging-but all there is is sage brush! Not like here, where we still have some trees that didn’t burn up, in the last 3 years. It just doesn’t seem like fire would be a thing, with nothing to burn, but most of the town burned at 1 point. Virginia city is just about as cool to go thru, too... with crazy history- and it’s fun. Every weekend they have different events in the middle of town- camel races, underwear races? Outhouse races....

Toma777 said:
The last time I was in Bodie was in 2002. It was around 1993 that I snuck into the private land area, still owned by descendants of the original owners.

I've had friends that say they lived past lives in Bodie, so for fun I told myself I would dream of a past life there if it were true, and that night, while camping near Bodie, I had a long lucid dream about a life in Bodie, which ended where I was buried alive in a mine cave-in. Like you said, creepy, but a lot of fun. What's funny is in the dream I recognized my sister in my dream as being one of my girlfriends in real life.

Is that an unmarked grave in the Masonic white peoples cemetery? Missing 1 knob? If so, that would be Lotties gravesite. She had a sense of humor, it seems- being the town hoe, she was not invited to a big Masquerade party- she dressed up, all disguised, and went to the party, anyway. She had a great time, that night, socializing with all the ladies of the town, who Despised her… They were pissed when they found out who they were socializing with that night! When she died they snuck her into the white portion of the cemetery and buried her there instead of on the next hill with the criminals and Indians and that token Chinese guy... It’s unmarked because they said that it would have been dug up for some morbid souvenirs, if her name was on it. I’m sure that they didn’t put her name on it to begin with! 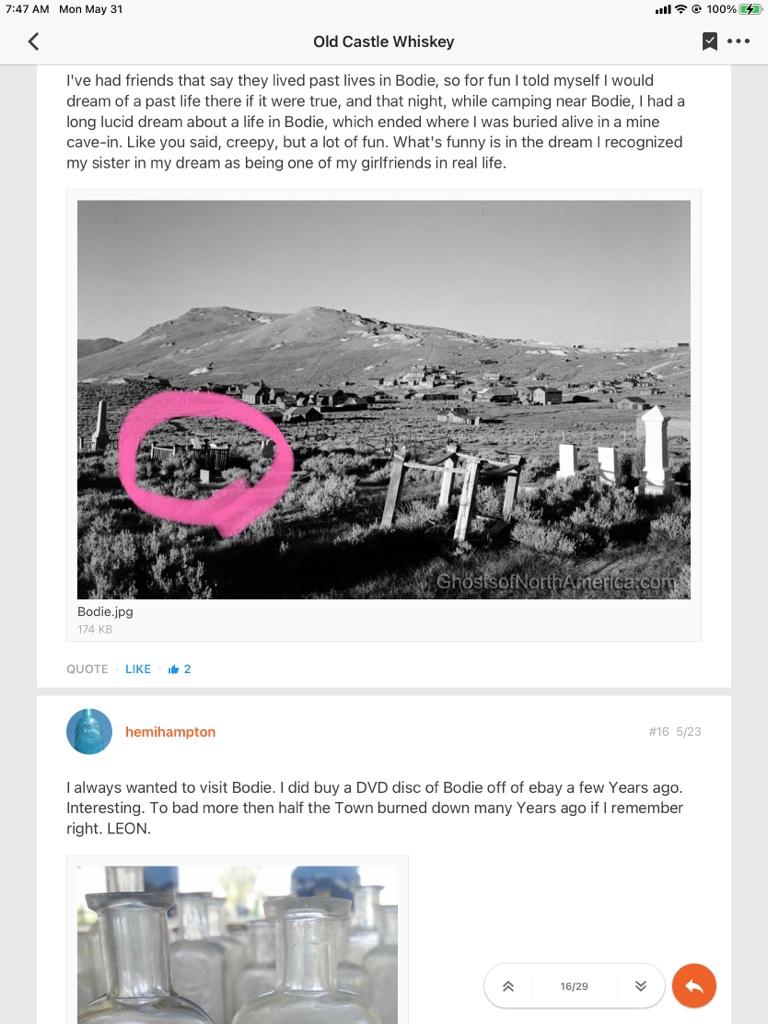