One of the nicest inks I've ever seen 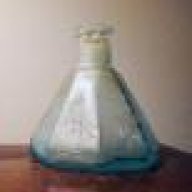 Oldsdigger said:
Thanks Nickneff ! Most of the others I have are Carter's Bixby's and Sanfords. Most of the Whittles were from my Dad who liked antiquing and would give me a few every Christmas and Birthdays. View attachment 219379
Click to expand...

These are awesome! The tall panel inks—I've dug these in both clear and aqua. Are they inks or mucilages?
S

saratogadriver said:
I believe my earlier posts were very neutral, and attempted to show some humor while at the same time giving an honest assessment. But I saw this little piece in the middle of your statement above and it touched a nerve.

I picked this piece of your statement for a reason. You assume you aren't talking to experts. At various times there have been big time collectors (as in $100000 bitters collectors), dealers ( people like Jeff Noordsy who routinely handles some of the rarest stuff, particularly New England early glass), and even a couple of guys who worked in the glass industry on here.

As far as experts on ink, I've been collecting ink bottles since 1990, and my father since the 1970s. Hopefully the pic of some of my collection will give you an idea that I may have a few of the things. Dad's collection, which will some day merge with mine, is larger than my collection. I Also have Covill's book and more recently Faulkner's 2nd edition, which are the current definitive authorities on inks. I don't have Lucy Faulkner's book right in front of me, but I'm pretty sure your ink is shown as a known reproduction.

It's a pretty piece but it's not a turn of the century abm bottle, nor is it something older. The color, the clarity, the form are all inconsistent with TOC abm, when the new machines were in their infancy and the abm bottles were fairly crude. The umbrella form is almost non-existent after the ABM machines came in. For some reason they basically stopped making them. So any ABM umbrella type is immediately suspect to begin with.

It's a known reproduction.

yacorie said:
have you ever seen a milk glass burst top ink? I acquired one last year or two years ago and I swear I’ve seen one before in-old auction catalogue or reference but have struck out finding it.

now I’m wondering if it’s an ink at all
Click to expand...

Here's the faulkner page with repro and decorative inks. It's not as close to yours as I'd remembered but it's also the closest I can find to your ink in two books. 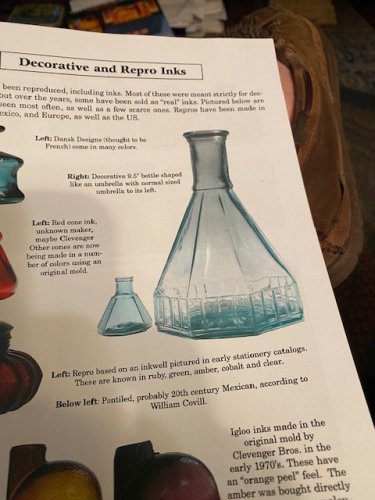 Here's the AB Laird ink to which I referred, the closest in shape that I could find. The shoulders and the vertical portion are both sided, while the ink in question is cylindrical with only sided shoulders. My assessment is still fantasy piece of modern production, but with only 45+ years of collecting experience, what do I know? I too, would encourage Shades to contact any of the "experts", Jeff Noordsy, Michael George, Jim Hagenbuch, John Pastor, Norm Heckler and more if you need them, and let us know what any of them have to say. 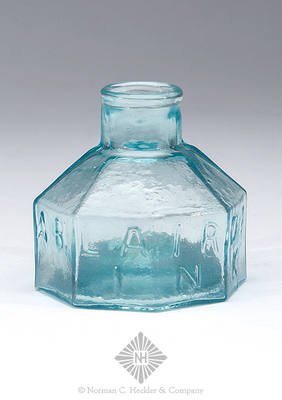 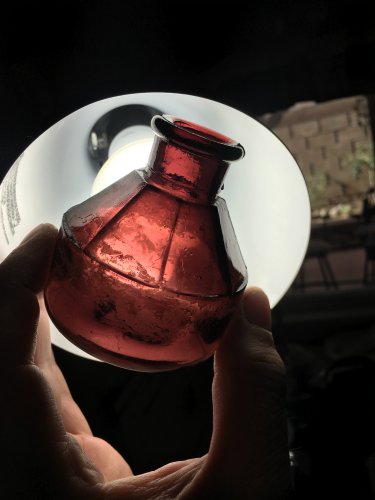 saratogadriver said:
Post a pic. I'd love to see it.

Here are some pics. When I bought it - I assumed it was an ink because it was in a group of nice inks but I’m not sure it is an ink.

yacorie said:
Here are some pics. When I bought it - I assumed it was an ink because it was in a group of nice inks but I’m not sure it is an ink.
Click to expand...

yacorie said:
Here are some pics. When I bought it - I assumed it was an ink because it was in a group of nice inks but I’m not sure it is an ink.
Click to expand...

I've seen those sold as lamps and as ink bottles, although I don't know that I've ever seen one in milk glass. We say ink but that taller paneled form is really most often seen with mucilage labels. I mooched this pick of a stickwell from another old string. You can see the similarity. 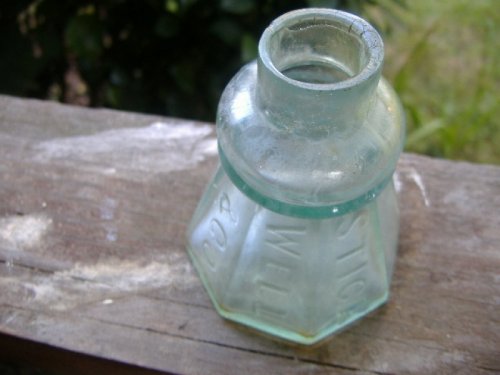 I've always wondered if they weren't sold with ink in them intending to be able to use them as lamps once the ink was gone. A promo item to encourage buying of the original product? I've got no evidence though to support that.

Thanks guys - I’ve considered the possibility of a small lamp but most this size have the finger loop.

either way - it was always a cool piece. I’ve considered just tossing it on eBay and letting the market determine what the heck it is haha. Ive tried to locate a picture or example in a catalogue to no avail.
M

Oldsdigger said:
Thanks Nickneff ! Most of the others I have are Carter's Bixby's and Sanfords. Most of the Whittles were from my Dad who liked antiquing and would give me a few every Christmas and Birthdays. View attachment 219379
Click to expand...

A small Amber bottle at the top of one of your pictures DSC 2141 jpeg looks like a capudine bottle? the green one next to it does it have a notch or groove in the side of it? Are both these bottles ink wells or are they refills.