On a recent excursion I found this clear hobnail bottle that is different from any other bottles in my collection. Most of the time I only find these bottles in pieces. It is about 6 5/8 inches tall and has the Owens-Illinois diamond and O entwined with an I in center. To the left of it is a 7 and on the right a 9. Date codes for Owens-Illinois bottles tend to be to the right of the logo. Single digits are usually from the 30's. So I will estimate it to be 1939. Does anyone know what brand or product was in this bottle? 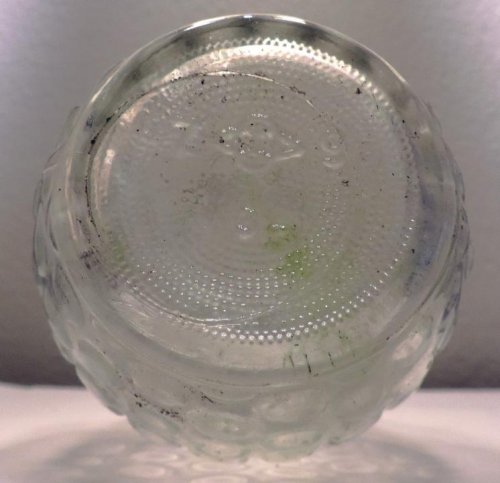 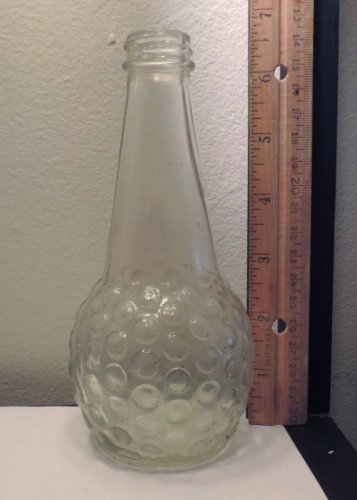 I dunno. I was thinking small vintage grape juice at first glance

Sent from my SM-J327U using Tapatalk

I've found those before. pretty sure it's not poison. probably just some juice bottle. LEON.

Thanks for the comments guys. I'll look up "vintage grape juice bottle" on Ebay and see if there's anything similar.
G

I have two in my collection. Although I've been unsuccessful identifying the former contents, I was able to track down information froom the heel. The Manufacturers or "Makers Mark"
(MM) on both of mine show a capital "I" inside an oval indicating it is from the Owens of Illinois Glass Company.

For the Owens of Illinois Glass Company, the number to the left of the "MM" indicates where it was produced. The number to the right of the "MM" is the Date Code (DC).
On many bottles, a single-digit "DC" along with the “I within an oval" mark indicates the bottle was made in the 1930's or early 1940's. Most bottles from the late 1940's and later have two digit date codes although single digit date codes were sometimes used in later decades without a period to the right of the code.

The number in the lower center of the base is the Mold Code (MC).
G