Yes, I know this is "pontils only", and that this PRE-dates pontils, but it fits the requirement of 'for really old glass only' much more than most bottles posted in this section.

General Information
This bottle was sold to me under the typical "first to third century A.D." heading for early glass unguentarium (holding salve, or oils/perfumes for the rich; sometimes used for votive offerings, though also buried with bodies "for" the after-life) , and while this is certainly an unguent, I think it pre-dates the second-century A.D. I think it predates the second century for a combination of reasons that, as far as various university and museum sites assert, were rarely combined after about 70-100 A.D. See below.

Early Manufacturing Characteristics Seen in Bottle
The two-colour opaque bottle is a roughly (natural protrusions) cast bottle (not blown, but poured) with a solid mass of green glass on the bottom and an ice-blue (not aqua) cast upper body and a applied top (sadly the top was broken at or after the time of excavation as evident by the lack of any decomposition on the sharp break).
You can see in the silver band (it literally looks like silver in person) kind of in mid-body where the maker had fused the two pieces together. A bottle like this would be made over hours or even days, for it had to be reheated several times.
The top was also separately applied (to what would have been a wide-mouthed body) as also evidenced by a silver band where it was fused to the mid body. Essentially, it is a three-part bottle.

Other
As for where it was made, I won't speculate. The Romans produced glass inside the Italian peninsula and abroad. They had started with Egyptian glass but forcibly relocated the makers to Rome and other cities of importance. By the time of our Savior, glass was being produced in several locations and worked in many more (glass was often produced and shipped to makers of glass containers and art).
It's typical of first-century B.C. and first-century A.D. bottles, for by the mid second-century colour began to be phased out save for truly intense or translucent (not opaque, like this example), purposeful colours as light aqua and white glasses grew in popularity for general use. Glass blowing took off by about 70 A.D.; and by the middle of the second century A.D., cast bottles were pretty much a thing of the past. They no longer made them out of multiple pieces of glass, either.

Question
Can this be cleaned? It looks awful when not wet. I bought it cheap, and the seller didn't note that the upper portion was blue. We all thought it first- to third-century from his photos, and you can't blame him since it is so badly decomposed.

An amazing piece. If the glass was any thick, annealing would really tough to do. I used to do fire assaying which produces glass in the form of slag, non annealed. Touch it when cool and blam, shards flying everywhere. Often spontaneous too. Annealing ovens host newly made bottles and such, get it almost to the slump temp, let it sit, turn down the heat over a day or two period, and you save most of the glass. The ancients didn't have much in the way of hardware to help them. I'm thinking they used the colors which happen at various temps, ie 2200 F would be straw yellow, cherry red is 1100 to 1300 and so on.
What fun it would have been to watch.

According to some sort of university page, some batches of glass were heated over a period of weeks before they were useful for working with. Apparently some of the colours (rather, additives, intentional or otherwise) had certain chemical properties that lowered the melting point of the glass: stuff they didn't yet understand in how it worked, but understood that adding this, or using such and such sand, worked best.
These are surprisingly affordable when bought from England, but they're almost always under three inches tall! 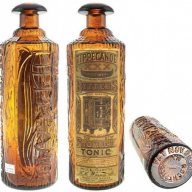 This is amazing Spirit Bear would love to have something like that in my collection only if it could talk the stories it would have.

Yes, if you click the red link in my last post, you will see that some can be very affordable.
I have more, but I perceive that someone here would rather argue that they're all fakes though I can propound pretty strong evidence for their genuineness.
P

Great bottle! Something you need to be careful of are the later Byzantine and Islamic-era near-eastern bottles/vials. They are certainly old, and it's hard to tell the difference between 1,000 and 2,000 years worth of patina/chemical erosion, but it stands to reason that the majority of surviving ancient glass vessels are more recent than Roman Antiquity, and when you compare the number of advertised medieval Byzantine/Islamic vessels with the numbers of advertised so-called Roman vessels you will observe a troubling discrepancy. Roman artifacts sell for much more than Islamic artifacts, and the dealers are acutely aware of their bottom-line. Also, there is a massive quantity of modern fake colorful so-called Phoenician (or Greek/Roman) beads, baubles, and vials out there that are very deceptive for those who don't specialize in antiquities. Just some things to keep in mind. Your piece looks good to my eye, but never believe what the dealers claim. Most "ancient" glass on the market isn't what it's advertised to be.

Plumbata, thank you for the information. I've mostly been researching from museum and university catalogs, some of which give very detailed information down to what sites their pieces were dug from, in order to learn more. I am staying away from all Phoenician glass because of the reason you cite.
You must log in or register to reply here.
Share:
Facebook Twitter Reddit Pinterest Tumblr WhatsApp Email Link