Unknown variation of 7up bottle

Yes my bad. I know Glenshaw started in 1932 but the majority or maybe all of my 7 up bottles are different glass manufacturers such as owens,duraglas,and Hocking glass corp. I know Dr.Pepper did the same thing with the letter by the lip. They did it as the story goes so that the consumer did not know how old the bottle was that they were drinking from! Thanks for the info.
J

This is some info I thought I would share.

Jstorm, I collect 7ups and although I do not have any '7 bubble' bottles with '8 bubbles' above the swim girl. They are out there. Here is an ebay link to some i just found. For a dug bottle it is in great shape. Thanx for sharing. 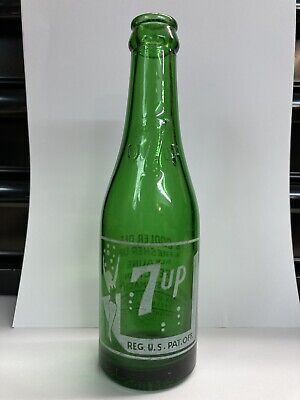 U7P EMBOSSED ON SHOULDER OF BOTTLE. I can’t find another 7up bottle in this size. From what I’ve seen, most say 7UP. It’s from Fresno California, the markings on the bottom read-. FRESNO, CALIF. From what I’ve read, it is unusual or rare because-.
www.ebay.com
L

Hey RB,
Your NJ Green/Blue isn't going to far this season . Hang in there...
J

iggyworf said:
Jstorm, I collect 7ups and although I do not have any '7 bubble' bottles with '8 bubbles' above the swim girl. They are out there. Here is an ebay link to some i just found. For a dug bottle it is in great shape. Thanx for sharing.

All these bottles have 8 stars above the swimsuit girl from before they were changed to 7. The front of 7-up bottles originally had 8 also but were changed to 7. Late 1930’s, early 1940’s most likely.
www.ebay.com
Click to expand...

You do have an interesting bottle with a number of things happening. I’ll try not to hijack your question with any unrelated pictures or subject deviations.

Yes, Glenshaw Glass used the letter on the reinforcing ring of the bottle which became a reliable dating code.

According to Bill Lockhart, “By at least 1932, Glenshaw began embossing a small ‘G’ on the reinforcing ring of the crown finish of its soda bottles. The letters began to advance in 1936, and they became reliable date codes.”

One of the interesting things about your bottle is the extra embossing of 38 on the reinforcing rings as well. That would be a deviation, as I understand their practice from just the letter. If that is indeed a date code, I haven’t heard of that before. Bill Lockhart, to my knowledge, has not mentioned Glenshaw adding a two digit date code on the reinforcing ring. It wasn’t till 1959 that they started using a two digit code as was the practice of most other soda bottle manufacturers.

Your bottle has 7 bubbles on the main ACL shield, 7 bubbles on the neck/shoulder label but has 8 bubbles above the swim lady. The transition from 8 bubbles to 7 by bottle manufactures seems to be fraught with inconsistencies. These changes to conform to the 7up name began in 1938 and was mostly complete and consistent by 1941. Having said that, aberrations to the general pattern show up now and then.

Your bottle has back label 3a which was used, according to Bill Lockhart, from 1940 till roughly 1948. Why your bottle, which seems to be a 1937 or 1938 bottle, has a back label that supposedly hadn’t began being used till 1940 is an excellent question.

The swim lady on your bottle has 2 feet, which was a change from the 1 footed swim lady on the early bottles that had the one foot origin most likely from the ‘Slenderizing Lady’ on the paper label bottles.

I hope this helps you.