Here's one I found in a river:

Here's a pair of blacking bottles, circa 1840s:

Hey there! I collect sea glass, and especially treasure the black glass I find. Can you tell me anything about the patina on this shard I found a couple of days ago? Benicia?
[video]https://www.facebook.com/kelly.merrell.92/videos/10214026112384575/[/video]

Sorry, Kelly, there just not enough of the bottle left to say much about it. I do note that it is thick-walled. That may indicate that it was used for a carbonated beverage like champagne. A champagne bottle -- the earlier ones, at least -- often will have some curve vertically. Here are some earlier champagne bottles:

Thanks for getting back to me That actually confirms my guess, since I've held my fair share of champagne bottles, and the shape hasn't changed much over the centuries. What I'm really curious about is the powdery iridescent film, as I have seen that sort of residue in images of old black bottles. I've had someone in another thread describe a chemical process that sounds like what I've read about Benicia iridescence, but I don't understand the opaque/iridescent film. Is it byproduct of the corrosion? Should it be removed, and if it is removed will the iridescence remain?
N

I have a few 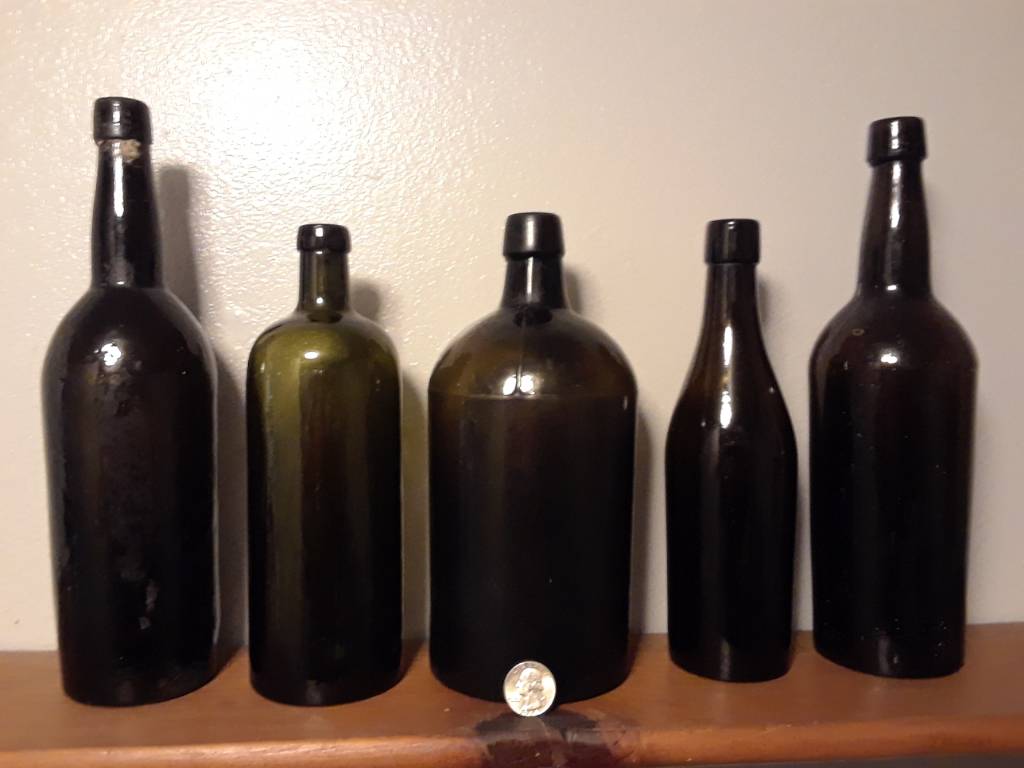 Harry Pristis said:
I have a black glass bottle that is sort of an odd-ball in my collection. I don't know if the bottle is British or American or from someplace I haven't considered. Can readers here tell me if this form is familiar in local digs?

The bottle was blown in a turn-mold, and has a lip that suggests to me a British beer/ale bottle. The volume is 24 fluid ounces, which is a beer bottle size in the USA. The sloping shoulders with the skirted bead-lip make it stand out on a shelf of early wine bottles. I'm only guessing at a date of 1840-60 for this bottle if it's a British bottle, and 1860-70s if it's an American bottle.

Can you help me with opinions on this bottle?

Hi Harry, The base certainly looks English from around 1860 but the top seems completely different to the normal English blacks we get here in Australia

Thanks, TROG . . . I appreciate the observation. Sometimes, we just have to eliminate possibilities until what's left must be the answer.

I don't have a whole lot of black glass, but here's a couple of rare Lynch & Clarke varients.