Very pretty bottle about 9 inches tall - no mold lines so I think it might be a turn mold. It as a thick applied top and a metal screw cap clamped over the bottle top. It has an open pontil that still feels rough and not worn down and not much wear on the bottom. Is this an art piece done in a pre 1900 style, a pre 1900 bottle that was painted well after its creation or something else? Any thoughts are appreciated. 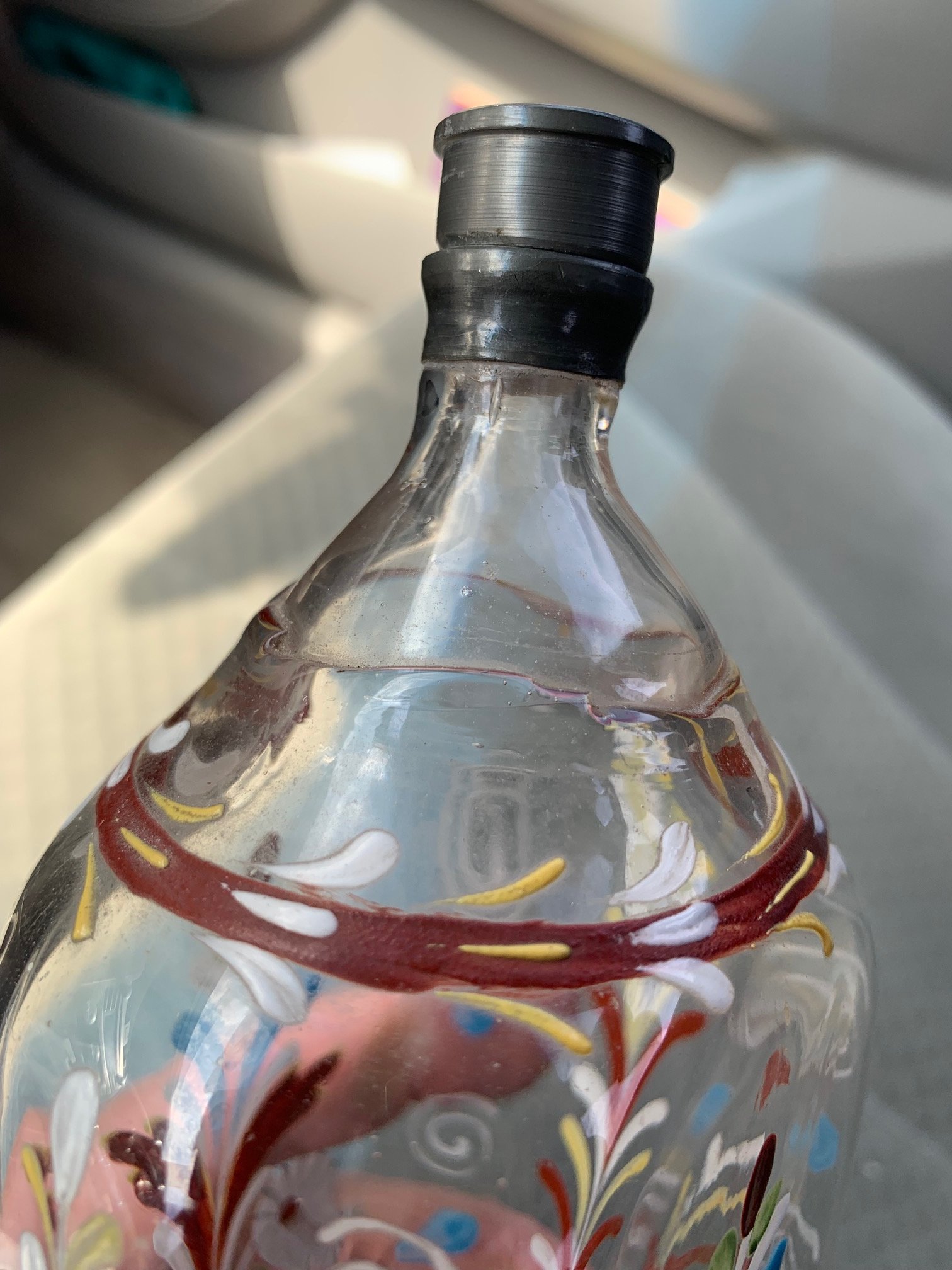 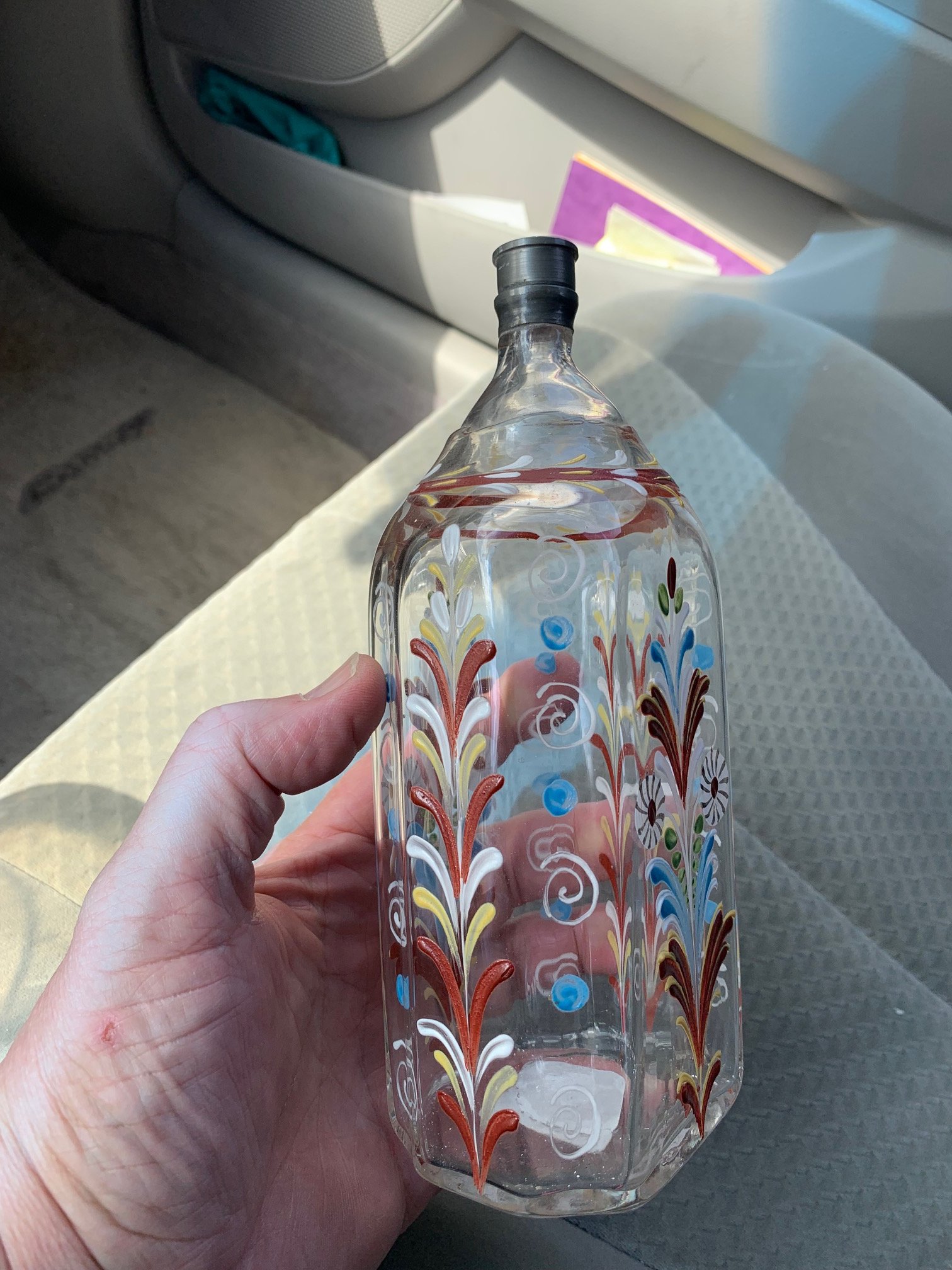 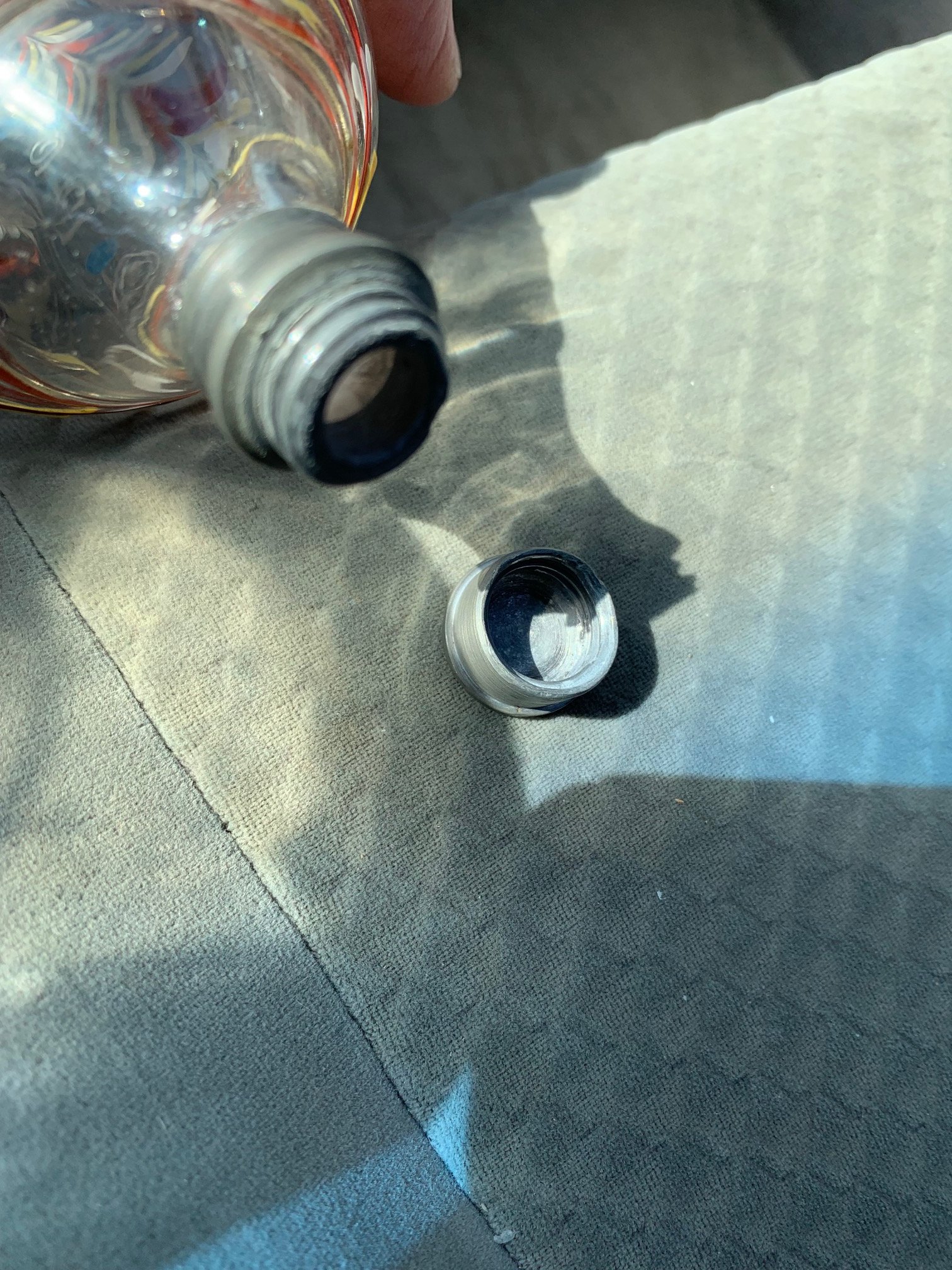 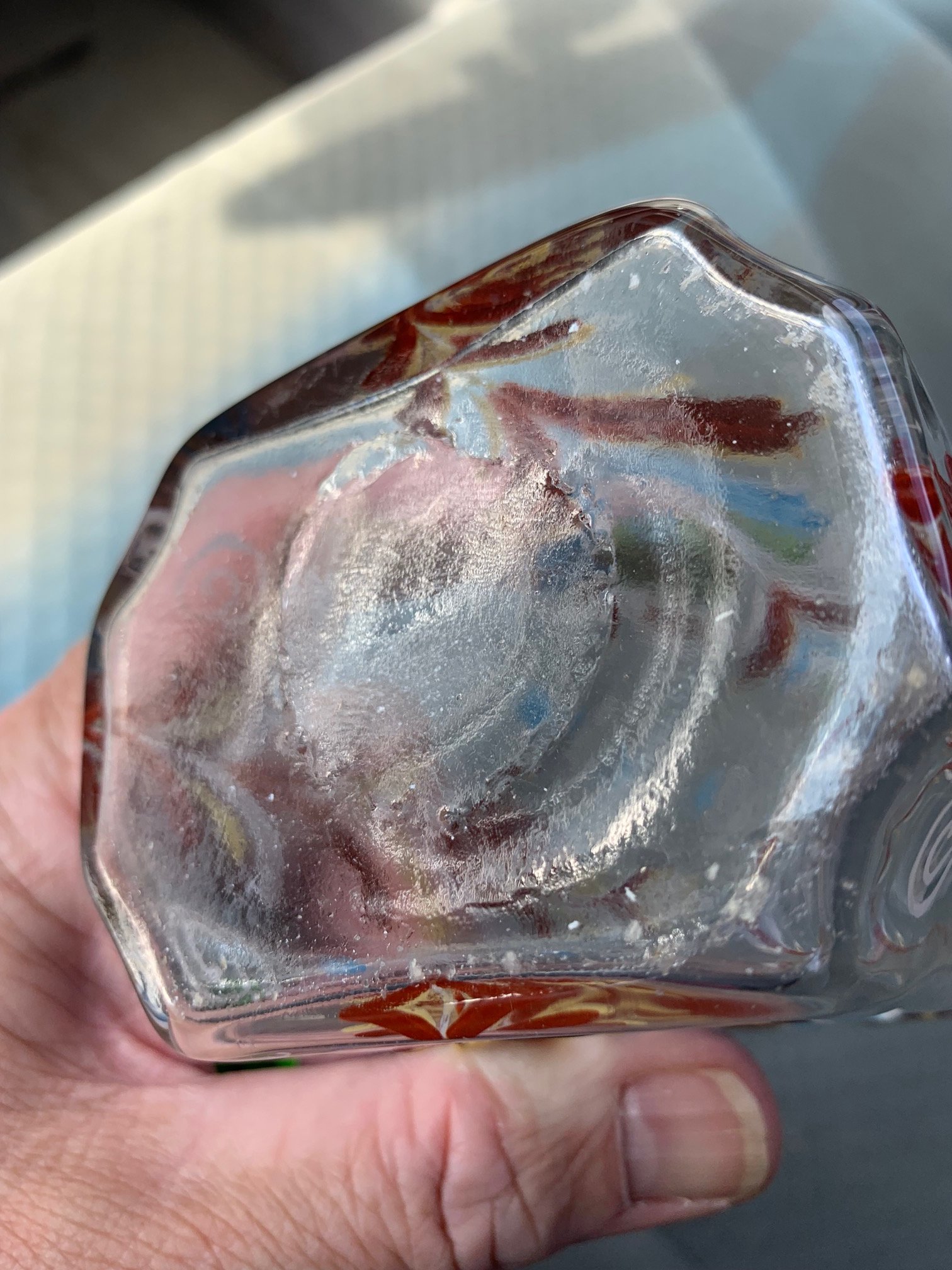 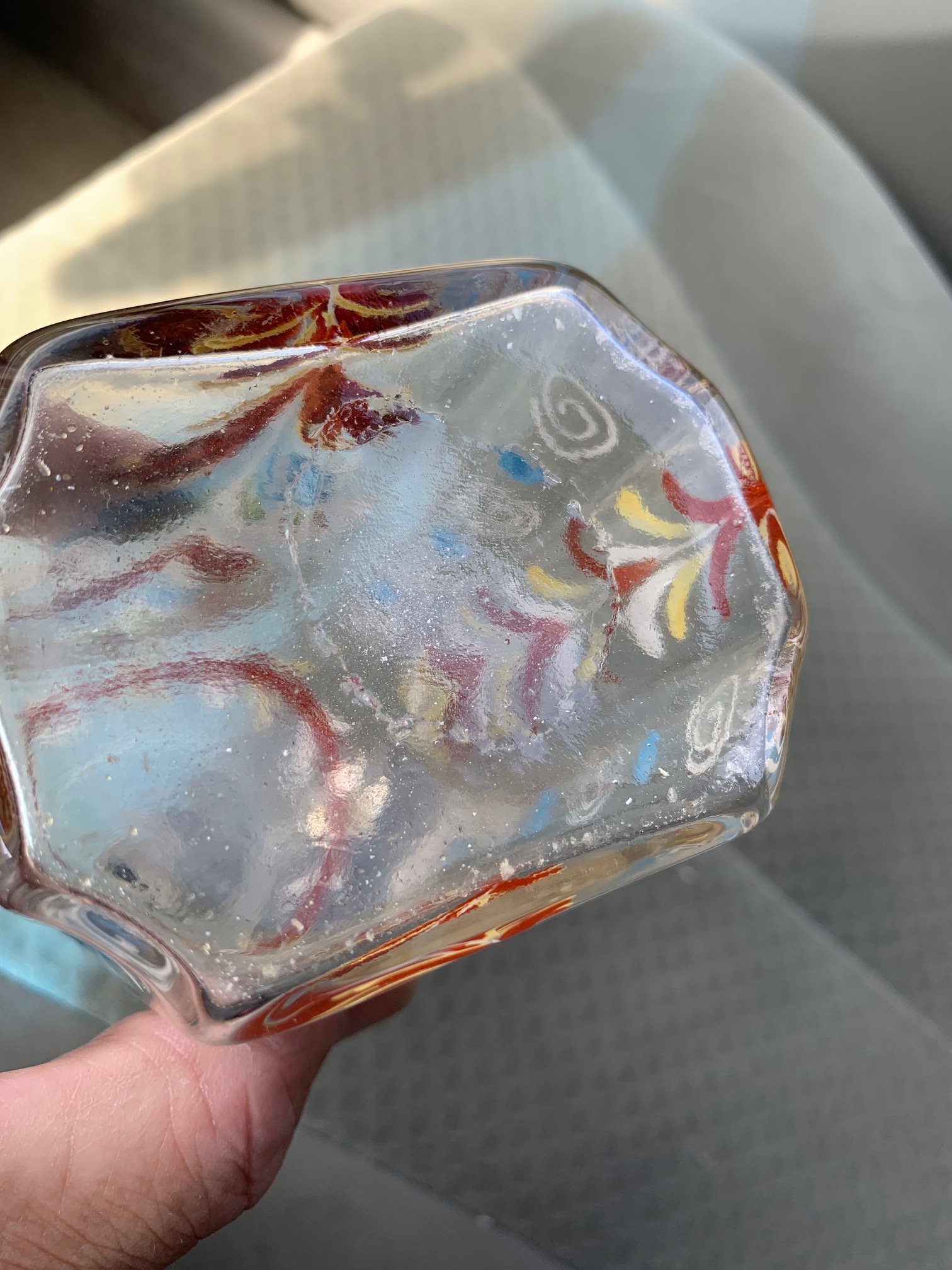 I think you have an European art piece, likely intended as a liquor decanter. If the decorations are fired on enamal, I'm a more convinced.
W

Hamco said:
Very pretty bottle about 9 inches tall - no mold lines so I think it might be a turn mold.
Click to expand...

It is impossible for it to be a "turn mold." The term refers to a bottle that was "turned in the mold" while still plastic during manufacture. To be capable of being turned, the bottle necessarily must have a circular cross section. Thus, square, rectangular, octagonal and similar shapes were never "turn molded." Turn mold bottle manufacture was accomplished by coating the interior of iron molds with a special paste that facilitated the turning. It was done specifically to erase the mold seam marks and impart a high luster to the glass surface. Most commonly, this finishing method was applied to wine bottles, sparkling wines especially.

Other than those turned in the mold, bottles that truly lack any mold seam marks must necessarily have either been free blown or initially blown in a dip mold. Even the latter will often exhibit a trace of the top edge of the dip mold if further development of the bottle being produced did not progress too much further and obliterate such marking through the process of additional inflation and refinement of its shape.

I'm not a student of European art glass; but I do know that certain regions, Venice, Italy in particular, are known for their glass blowing. As I write this, there is a decorated, cobalt blue decanter and set of shot glasses in a cabinet behind my right shoulder. My parents bought the set in Venice as a souvenir of our 1964 trip to visit the German side of my family and tour a bit of Europe.

Someone more expert in this forum might be able to venture an opinion on country of origin of your piece based upon the decoration styling. I don't know why specifically, but I get a Hungarian vibe.

I could not begin to venture a guess as to the age of your bottle other than to note that the metal closure--pewter or similar pot metal I presume--does have a patina; but such could develop in just a few years depending upon the composition and storage conditions.

Thank you for the excellent information! While I was wrong about the turn mold and should have remembered how they were created, I don't feel the piece is very old (50-60 yrs vs 160 yrs) given the lack of overall wear to the piece. The opening at the top also is not wide enough to seem useful in any applications from before 1900. Too hard to fill, too hard to empty but again, I'm just a junk dealer that likes bottles and knows enough about them to be dangerous. Thanks again for your in-depth and knowledgable observation!

The form itself dates to 18th Century Europe; but, I think you're right -- this Central European spirits flask (schnapenflasche) is probably much younger.

See ANTIQUE GLASS BOTTLES by Willy Van den Bossche, pp. 278-279. If you don't have this book, I have one to sell you. It's still in the publisher's wrapper.
S

This type form and decoration is as Harry states, although some similar form/decoration was blown at Steigel in Manheim PA by imported German glass blowers. But I believe a fair amount of the stuff out there is fairly new and made to deceive.

BTW, it's blown in the half post method, where a second gather of glass is taken part way through, giving the piece that distinctive line around the shoulder.

Half-post method: A variation on the dip mold/pattern mold theme is a method of bottle production where the gather is slightly expanded then dipped again into the glass pot to apply a second layer of glass over the initial gather. This second layer of glass typically covered the base and body portions of the first gather ending on the upper shoulder. Postes was a French term for a gather of molten glass. Thus the term "half-post" for this method, though these bottles are well more that "half" covered by the second coating of glass (McKearin & Wilson 1978). The end point for this second layer of glass is indicated by a thickened ridge on the upper shoulder of the finished bottle. Click Pitkin shoulder to see a close-up picture (flask to the right) of this ridge which shows just below the bottom of the neck and just above the pattern mold ridges.

This method was used with regular shoulder height dip molds of various shapes and with pattern molds. Bottles produced by this method are often called "double-dipped" in collector jargon. Some early collectors incorrectly believed that the neck of these type bottles were "inserted" into the body of the bottle, a largely impossible feat. The term "inserted neck" still crops up occasionally however (McKearin & Wilson 1978). This production method is also often referred to as the "German half-post" method since it was believed to have originated in Germany (Munsey 1970). 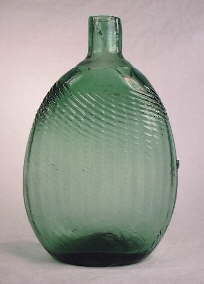 ​
Certain types of half-post produced bottles - like the "Pitkin" style flasks - were pattern molded after the application of the second layer of glass. The flask could be patterned once (like the nursing bottle pictured above left) or patterned twice giving a "broken swirl" appearance to the bottle, which can often resemble popcorn kernels. The forest green Pitkin style flask pictured to the right above was produced by the half-post method; note the horizontal ridge encircling the shoulder just below the neck. This flask is single patterned on the upper 40% of the body and double patterned on the lower 60% (click picture to enlarge). It was most likely made at a New England glassworks between 1780 and 1820 and would be referred as being "swirled to the right" (from the bottom of the body upwards) which is the most common direction for swirling on New England "Pitkins" (McKearin & Wilson 1978; Noordsy 2003). The light green "Pitkin" style flask pictured in the pattern mold section above is another example of a double patterned "broken swirl" flask from the same era. This is an unusual color for a New England style "Pitkin" as most were blown in darker shades of green and sometimes amber, e.g., olive green, olive amber (Noordsy 2003).

Not all Pitkin style flasks were made by the New England glass factories. Many were made by various glassworks a bit further to the west. The Pitkin style flask to the left was most likely produced at a Midwestern glass factory - Ohio or possibly western Pennsylvania (Pittsburgh) - during the first third of the 19th century. It's heritage is indicated by the brighter green color and the more circular shape of the bottle body. This flask was also twice pattern molded resulting in the "broken swirl" pattern (McKearin & Wilson 1978). Click Midwestern Pitkin close-up to view a close-up of this flask which distinctly shows the half-post "ridge" on the upper shoulder as well as the pattern mold ridges. This flask would be referred to as being "swirled to the left." Midwestern flasks were rarely if ever blown in olive-green or olive-amber and are most common in more vibrant greens, shades of amber, and aqua. For more information click half-post method.

Nice looking bottle here's all about how it's made.
If your interested in selling it contact me, always pay fair market prices.

Frank
You must log in or register to reply here.

New member from Maine, Old bottle from "who knows where".