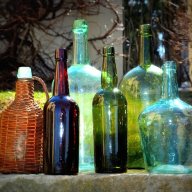 So I was lucky enough to come across an nice a nice bootle lot at a good price, Most are late 1800 Chemists and remedies. All except 2 are ground pontil BIM's with applied lips. But the one that really made me get this collection since they were not really valuable bottles. Ranging from $10 - $20 at best in value. Was this Billings Clapp and Company. The name Billings Clapp is a direct connection to my Family on my Mother's side. Her Mother was Anne Love Clapp, before re marring and becoming Anne Love Collins. Abrion Clapp was responsible for incoporating the town of Wellesley Mass. He was a realestate developer and investor. One of his businesses was a Chemicl company back in the 1870's When he passed his estate and holdings down to his Son, Abrion Billings Clapp. This bottle is a Billings Clapp & Co. Chemists, Boston.

Yeah they are all mostly hinge mold bottles since most of them Guess the correct term would be post mold not ground mold since they are a smooth concave circle. But not flat bottoms. I'm thinking end of the 1800's on most of them since they were all applied lips except two. the Vogue Perfumery Co. and the Sloane's. Dating them more in the early 1900's.
You must log in or register to reply here.
Share:
Facebook Twitter Reddit Pinterest Tumblr WhatsApp Email Link