BOTTLES CAN CAUSE YOU TO SCRATCH YOUR HEAD.

Most embossed beers have at least a city embossed on them, but on occasion there is only a product named on the bottle. Here are two such embossed beers that fill the bill.
The TIP TOP LAGER is claimed to be from New Orleans by those collectors as they say these are always found around there and I for one believe them.
The bottle at right WEISS BEER is a true enigma. No city, no state, but that big letter "G" in the middle, which has to refer to a bottler, brewery or such. It has been my hope that a bottle with this same embossing and the other side with a company on it would turn up. Any help out there would be appreciated.

Weiss is considered a bottle shape. I have seen loads of Weiss bottles but none with The G. must be the brewer or bottler like you mentioned. Another mystery. Someone, somewhere collects only Weiss bottle. Even they may not have the answer. Good luck. Nice pictures.
ROBBYBOBBY64.

Here's an advertisement for the "The Tip Top Lager Beer"

bottle-bud said:
Here's an advertisement for the "The Tip Top Lager Beer"
Click to expand...

Weiss is not a bottle shape. Weiss beer ("white beer") is a type of beer -- that is, wheat beer.
Weizenbier or Hefeweizen, in the southern parts of Bavaria usually called Weißbier (literally "white beer", but the name probably derives from Weizenbier, "wheat beer"), is a beer, traditionally from Bavaria, in which a significant proportion of malted barley is replaced with malted wheat. {from Wikipedia}

It isn't, I thought it was by some. I often see the term Weiss shaped bottles. If i am wrong, Sorry everyone if I was misled.
ROBBYBOBBY64.

ROBBYBOBBY64 said:
It isn't, I thought it was by some. I often see the term Weiss shaped bottles. If i am wrong, Sorry everyone if I was misled.
ROBBYBOBBY64.
Click to expand... 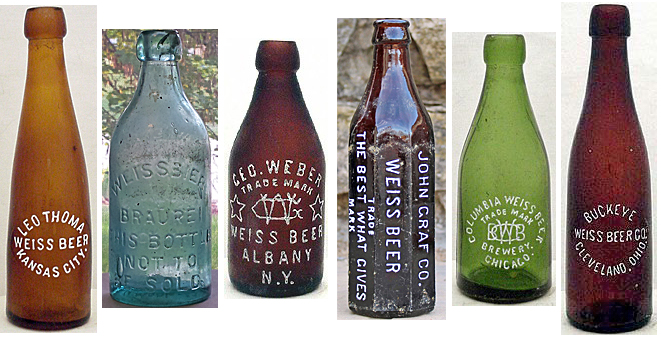 There are a few types of embossed beers that are referred to as WEISS due to the shape. It is also a type of beer. Very similar to the MALT bottles that are wider at the shoulder and narrow at the base. They are MALT bottles and MALT is a product. 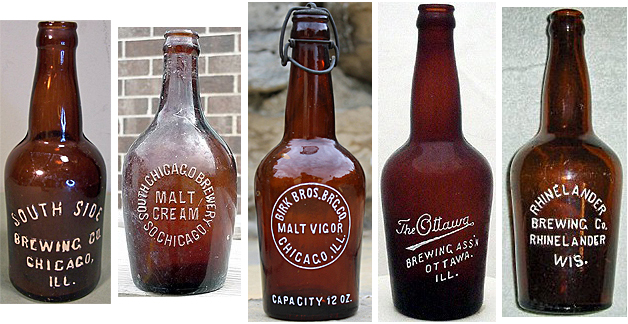 Illinois Glass sold bottles that were referred to as Weiss beer bottles. they also sold Champaign beer bottles.
Catalog is from 1906 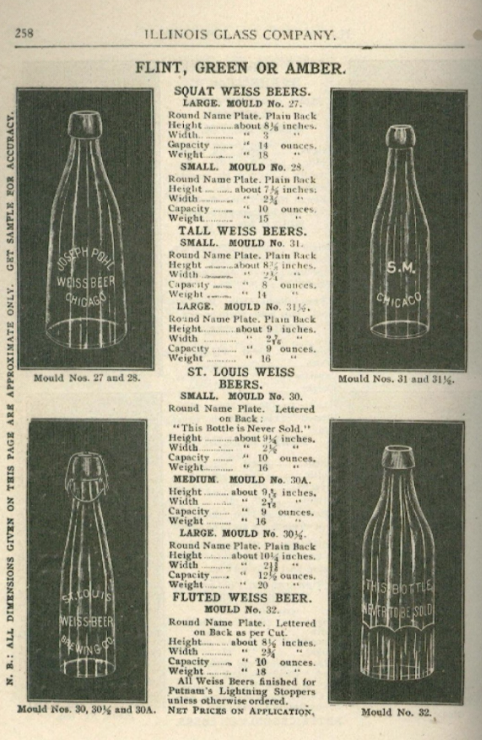 bottle-bud said:
Illinois Glass sold bottles that were referred to as Weiss beer bottles. they also sold Champaign beer bottles.
Catalog is from 1906
Click to expand...

Two of the items in the catalog.

I rest my case: There is no one form of bottle used for weiss beer. The images tell the story, including the IGC catalog images.

I am puzzled by UncleBruce's comments on MALT. Malted barley or malted wheat? Malted wheat is the weiss beer we're discussing. Why post images of purported "malt" bottles instead of actual weiss beer bottles? It is an illustration of how weak is the idea of a standard weiss beer bottle form.

I wonder if the weiss beer shape is another example of "bottle collector mythology" -- you know, ideas passed on from collector to collector for years, even though there is no underlying truth to the idea. Humans like to label things and will make up explanations for things they don't understand. Other such ideas include "whittle effect is produced by wooden bottle molds" and "iron pontil scars are produced by the use of graphite."

Alright! Now, we're having fun!
You must log in or register to reply here.