Is this Bott's beer bottle really from 1893 (Chicago Worlds Fair on label)?

Not sure if this is the correct area, but looking for some assistance with this old bottle. Bott's Pure Malt Stout, Port Hope Canada.

Was only able to find one other picture through Google but didn't have the 1893 label on there. I fell into a bit of a rabbit hole researching 1893 Worlds Fair beer awards, so thought I might as well join a bottle forum to see if any input. What do you think, is it really from that era? Thanks!

I would tend to think that that bottle is genuine...here's an 1896 ad that specifically mentions the 1893 World's Fair:

That's a really nice bottle! I imagine it can't be that common. 1890s definitely looks like the right time frame, probably not from exactly 1893 though as they would have advertised the award for years after (you can still sometimes find products advertising the awards they won in the late 19th century). I've always wondered how those awards worked, there seem to have been an awful lot of them awarded and even fairly small and obscure local companies claimed to have won them at international fairs.

I'd say it dates from possibly 1893 to possibly another 10 or 20 years after that. As Canadian bottles said they could have said that on there bottles for years. LEON.
S

So if it's really that old, is there anything recommended to help "preserve" the label or jut leave as-is? (All the other bottles I've come across are newer and don't have paper labels).
S

Those labels have lasted for over 100 years and will continue to last. You're good. nothing to be done except enjoy them.

I've seen people who take sheets of Mylar plastic and cut pieces big enough to cover the labels, then wrap them around the bottle and tape the ends together on the back to make a protective sleeve. Seems to work pretty well. 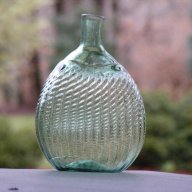