I've been searching relics , both native American and Civil War, so the bottle digging has been put on the back burner. We have had one of the wettest winters ever, and the ground is saturated most everywhere. Went to Mississippi to see family last weekend, afterward I stopped late one afternoon at an estate sale. The owner was in construction, a bridge builder , like myself , he had picked up bottles under excavated abutments and in creeks for over 30 years, and had quite a collection. Many had slight damage, excavated with heavy equipment, those bulldozers and trac-hoes make poor recovery tools for bottles. But these four were undamaged and early enough to interest me, since I've collected embossed straight side sodas since the 1980's. The first is a slug plate, W.W. Lake, from Jackson, MS , who had a long bottling career in that city. The emerald green Art Deco , is a Celery Soda and one of his brands, "Lake's", probably from the 1930's or later. The second bottle is a P.L Borders also from Jackson, MS. He was later in 1912 the plant manager for Coca-Cola. The last SS soda is a slug plate , Corso & Cefalu, Biloxi MS, who bottled various soda brands in that city, and appear to had been very popular , until a few years back.

Thanks, the AT&T network went down in the middle of this post, (

it's the worse ever), but I'm back, so I'll attempt to finish and post the rest of the photos. 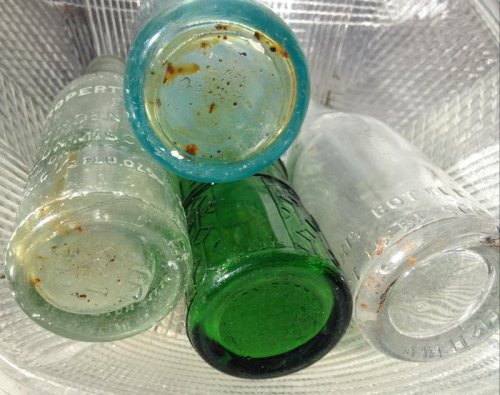