got a pic of some pops from one of our many antique shops here.
see anything worthwhile?
think they all marked 8-10$ each

i haven't heard of " good time pop " or " Ritters " perhaps there from the states , for a new collector the Mission or Lucky one are ok buys 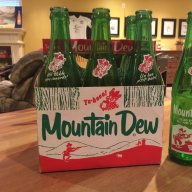 I have not seen Good Time Pop or Ritters either. The other bottles are pretty common. I just picked up a great bunch or bottles from an antique guy in St Catharines Ont. ACLs, Paper Labels and some embossed in both single serve and quart size. I paid $5 for most of the single serve and $7 or so for the quarts. There were many small bottles represented and a few others I just liked. I picked up a Blue Seal like the one you dug a few weeks ago, Evangeline embossed art deco, Irish Dry quarts etc. So good deals are definitely out there. Plus most were either new or variations to othersin the collection.
The shop still has a number of bottles left. Some very nice Canada Dry Ginger Beer, Suncrest, Garlands, Coke, Crush, Sky Hy, quart Mio and quart Moran Ginger Ale. These are just a few. There were also Wishing Well, local Irish Dry etc.
Hi name is Tony and his store Antiques and Collectables is located at 3389 King St in Vineland. Jason
G

Oh very cool JKL thanks for the tip!
maybe i'll swing out there on a rainy day!
this was the first shop I hit in Hamilton since taking interest in bottles.
have to get a feel for what is a deal.
he had some odd bottles too.
C

I've never seen Good Time Pop or Ritter's either. I googled both, Good Time Pop I think it a later ACL from Canada, no idea where though. Probably dates to the late 70s or 80s. Ritter's is from Wisconsin. I generally wouldn't consider American ACLs to be worth bothering with for a Canadian collector unless they have particularly interesting graphics. The others are pretty pricey for what they are, you'll find them cheaper somewhere else sooner or later. Only one that might be worth getting is Good Time Pop if it's something of interest to you. Generally more recent ACLs aren't super collectible but I'd pay that much for an unusual local one from that era.

I have seen most of those bottles in various flea markets and antique shops for $2-$5. I agree with CanadianBottles,there are less expensive bottles like these out there. I'll post the bottles I picked up once I take pictures of them to catalogue.
G