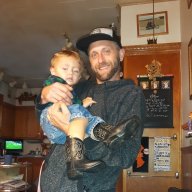 Went to auction tonight spend some money. found this cool pontil bottle 12$ got it.after some research here what I found online.

Great color , interesting design too ,first one i have seen . Think that is chip on bottom not pontil

That's a funny looking Pontil. The Worth point article sez pontil but then sez 1910 -1930's? too new for a Pontil.

I was just excited to find something not reproduction on my own being new to glass.here are some other pics I've found.

Missing topper,blue one in pic looks reproduction compared to the one I got today

I'mcurious about this bottle regardless I cleaned it up and it is one beautiful bottle. Has a lot of bubbles in it and some crude,sharp edges an inperfections. All the research and videos that I've studied over the last six months that I've gotten into these bottles has feels like it's paid off a little bit finding something really cool out of a whole building full of reproduction cheap glass. Checked out a lot of bottles last night but this one soon as I picked it up and felt how light it was curiosity start kicking in more studying the bottle I could tell that it's something special. Besides digging up the couple blobs I found probably the most beautiful bottle of come across so far.

Beautiful figural. It's pontiled, just not what we're used to seeing on American bottles from the early 1800s where another blowpipe was used as a pontil rod. In this case, a solid iron rod dipped in glass was used which leaves that type scar instead of the ring shaped blowpipe pontil mark, more commonly called an open pontil or occasionally a tubular pontil. Not implying that it's not American in origin, because later glassmakers, especially those blowing art glass tend to use the solid rod for empontilling for some reason.

Thanks for the info sandchip very interesting. I believe it's Mexican it's got some really faint imbossing. On the search line on this screenshot