Here's a bottle that caught my eye on eBay and I just bought it for cheap.

So it's clear glass, 7 and 5/8 inches tall, and has this nice tapered, elongated shape. The seller says that they think it is a "milk fat tester" to the best of their knowledge, doesn't seem 100% sure. I googled milk fat tester, and those didn't become a prominent thing until the late 1800s, and they have graduated markings and the bottom is rather amphora shaped rather than tapered/conical. 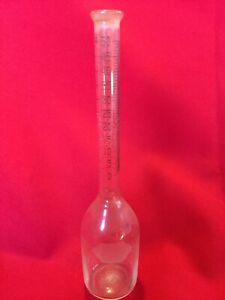 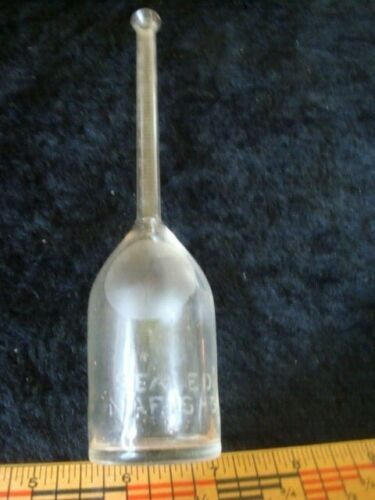 These are verified mlik fat tester bottles. I know the technology was developed in the mid 1800s but didn't actually come into general use until the late 1800s. I know they used them until at least the mid 20th century. My bottle could be one(or some other type of lab/diagnostic equipment), but I'm not convinced because of some key differences. To me, I'd just as soon(or sooner), guess that it could be a cologne or sauce bottle.

What do you guys think? Either way, it was $20 with free shipping, has an open pontil, a cool shape, and is in great condition. It's a win all around, but it would be cool to know for sure what it is.
B

Your bottle looks 20th century to me. Not old maybe 1950's or so. Milk fat were in small bottles and put on a centrifuge to separate the fat. Think the Milk fat Story has leaks in it. lol
S

Hard to tell from some of the pics, but it apparently has a tooled lip. Once I get it and can inspect it myself I can better tell how old it actually might be. From what I can see, I'm actually going with 19th century. Looks legit and not machine made, has an open pontil, has haze staining in the bottom from use as a bottle rather than a display item. Could still be newer, but I'm really not seeing anything that confirms that, and quite a few things confirming 19th century.

As for the milk thing, I'd have to agree and say my bottle probably isn't the same thing. The ones I posted are a real device though called a "Babcock milk testing bottle" patented in the 1800's(after the pontil era) and used into the 20th century. So I'm doubting my bottle is one of these, and actually just a weird shaped pontiled cologne or sauce that's a bit older.
S

Alright, I've received the bottle. First impressions, almost 100% positive it's 19th century. The pontil is open and looks right, the lip is tooled, and there are some tooling marks on the top portion of the neck as well. There is some very subtle base wear(it is a small and fairly light bottle). There are quite a few small bubbles in the glass, and there is a bit of inner haze staining from actual use as a bottle.

Alright, so what type of bottle is it? Pretty sure it has nothing to do with milk fat at all. My first guess would be cologne, and my second would be medicine(perhaps opium or something). It could be some type of hot sauce or other condiment that was used more sparingly than ketchup or something in a bigger bottle, or maybe it could be laboratory related.

When in the 19th century was it made? Still not sure. The pontil says pre-1850, and if it is, it's a pretty clean example in manufacture without much crudeness, or it could be European or some other late pontiled piece from the 1870's or later. This I'm not sure on.

Could it be some sort of laboratory equipment? Some of that was custom made and o/p into he 20th century. Just a thought.
S

Dogo said:
Could it be some sort of laboratory equipment? Some of that was custom made and o/p into he 20th century. Just a thought.
Click to expand...

You know, that's also a distinct possibility. That's the only way I can see it being more modern, because it's certainly a utilitarian piece and not a vase or something like that. I'll do some more research in that area. That would make it a lot less old, but would still be a totally neat hand-blown piece of history.
S

I've looked around at some antique and vintage labware, and didn't really see anything that looked like my bottle. I saw some of the actual milk fat tester bottles from the 1950's, they had graduated markings and a different shape entirely. The only similarity is the long neck. Most of the custom labware I see from the 20'th century is not basic cork-top bottles like mine, but more complex stuff with multiple glass-on-glass fittings. The lab bottles that are just bottles/containers at this point in time all look to be topped with stoppers instead of corks. In fact, I don't see much or any late 1800's lab ware that uses corks anymore either.

I'm still not 100%, but reaffirming more and more 19th century, maybe turn of the century the latest, but surprisingly, doesn't look quite right for that late either, at least as far as lab stuff because of the cork. Could still possibly have been used in a lab setting, but almost surely not a modern mid 20th century one. Still looks just as possible it's simply a cologne or medicine though. Whatever it is it's certainly cool and I'm glad to have it in my collection.
C

I'm leaning towards laboratory equipment as well, but not sure. The pontil reminds me of lab bottles that I've seen before, but the shape doesn't. It's a strange bottle, doesn't seem quite right for any of the explanations I can think of for it.
S

My favor has shifted to medicine. I stumbled upon this example of a European medical phial type bottle from the very early 1800s.

Much cruder and more colorful, but the shape is close enough to make it really plausible that mine's an American or European medical phial, could be as early as early 1800's or as late as 1880s I would imagine.

What is the capacity of the bottle in milliliters (assuming it is European)? Sometimes the capacity provides a clue. The conical body reminds me of a style of German beer bottle. The long neck is the puzzle. I'm leaning toward bud vase.
The blue-green medicine vial looks to me to be modern art glass.
You must log in or register to reply here.
Share:
Facebook Twitter Reddit Pinterest Tumblr WhatsApp Email Link