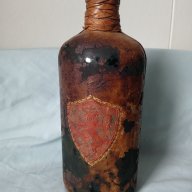 I've tried to find information on this bottle for years with no luck. Please help if you know anything about it. Just message me to ask questions. It has a craft on the front a detailed strap down the sides. leather strapping on the rim. Green glass with wax holding on a leather?

Weird one. Can't tell if the bottom view is glass or something else.

I think it's a 20th century liquor bottle, probably European. If those are seams on the lip that I think I can see it confirms the date range. I suspect it was left to degrade in a barn or under a house or something, which explains the bad condition of the leather. Leather-covered liquor bottles were a bit of a fad in the mid-20th century.

Is there any value to something like this?
C

I'm not sure how to preserve something like that honestly. And I'm afraid that no, there isn't any value to it. These things are quite common in perfect condition at thrift stores.

Definitely no seams anywhere on this bottle. Thanks again
T

I agree on the European, probably Germany. It's very similar to these "Providentiae Memor bottle. Providentiae Memor is Latin for Providence Remember, and is the motto is the Kingdom of Saxony, now part of modern Germany.

I can't help with the age of this bottle, but it's very similar to some of these: