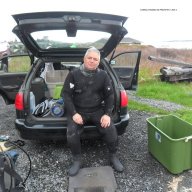 Hi i worked for a major pop bottlers for nearly 37 years . As For the Pepsi and other aluminum cans I spent many years on a can line producing 1150 cans per minute 10 hours a day . the cans date from the mid 80's . . I saw allot of pop cans

last weekend wasn't very productive , checked the lot where I found the howdy cans but only found a couple modern liquor bottles and a broken coca cola bottle from the 70's , didn't find any new areas with cans

the next day checked the woodlot where I found the 7 up can but didn't really find any cans that day . found some bottles poking thru the leaves but all were liquor bottles , glass jars or beer bottles . only soda was part of a broken coca cola from 40's

decided to go back to the main can dump I normally check and see what else was still there . 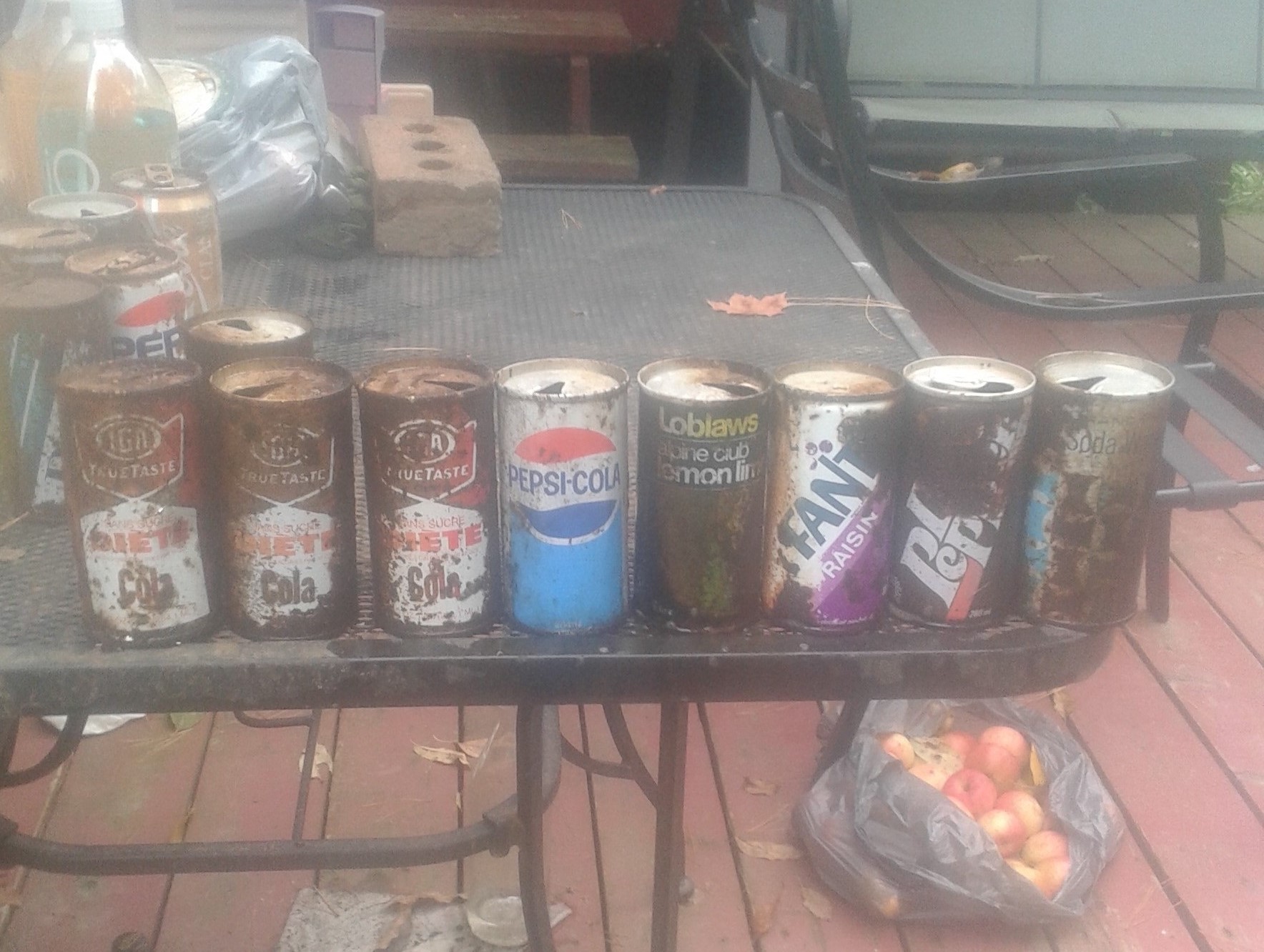 The large-diamond Coke can you posted earlier would bring some big bucks if it was clean. (check Epay). Those are circa 1960-64 (here in USA anyway).

GLASSHOPPER55 said:
The large-diamond Coke can you posted earlier would bring some big bucks if it was clean. (check Epay). Those are circa 1960-64 (here in USA anyway).
Click to expand...

I didn't toss those away there in the garage , is a few older coca cola cans in a growing area for them , not exactly sure how I'd clean them more with what I have though

poked around the wooded lot I though might of been a camp site again , didn't find much . mostly modern junk and a couple metal cans .
Motts Clamato but not that old , damaged 70's era America dry ginger ale but broke apart ( hadn't seen that one before ) , pepsi with a lot of colour and some sort of cola can ? but couldn't id but does say cola 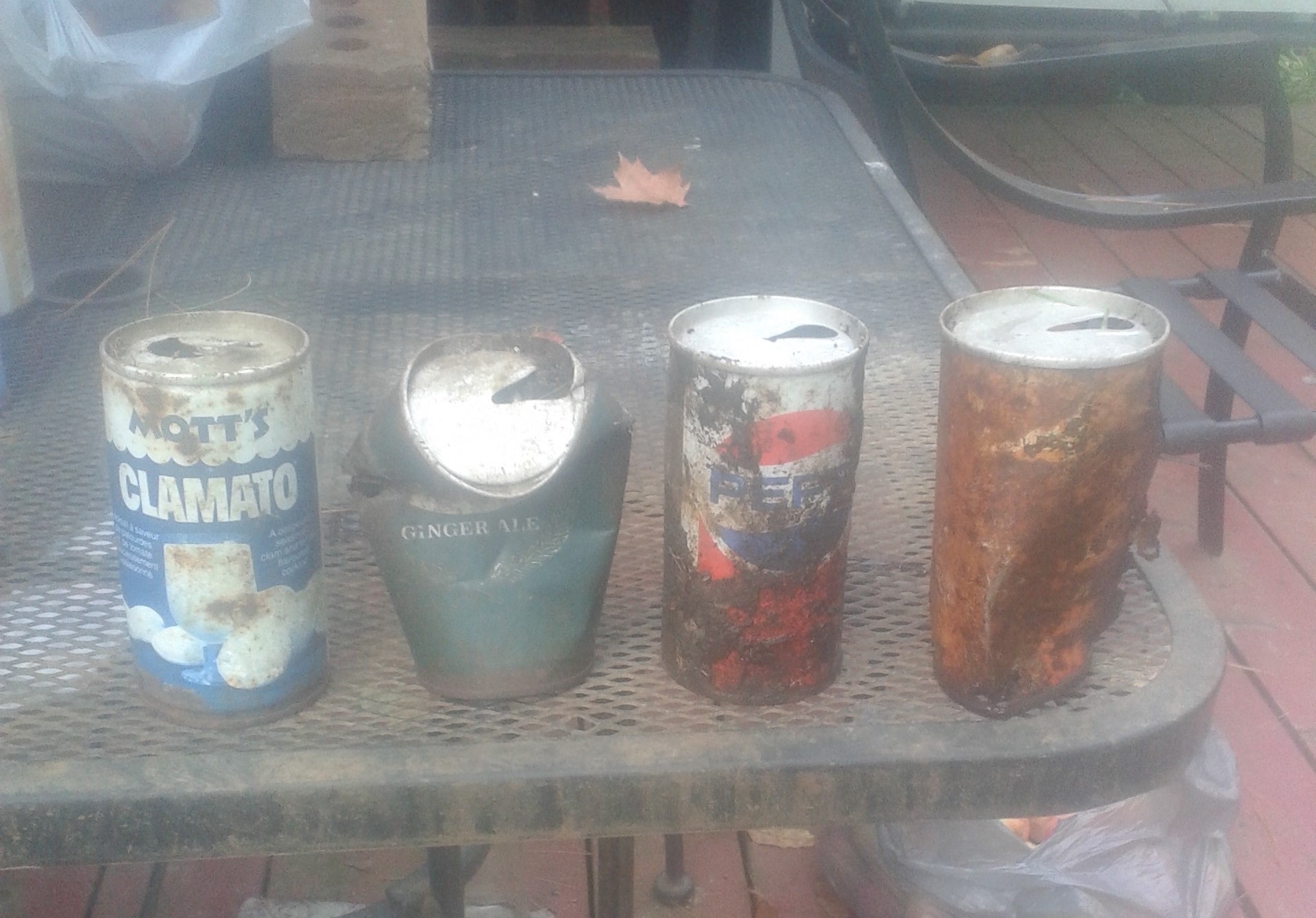 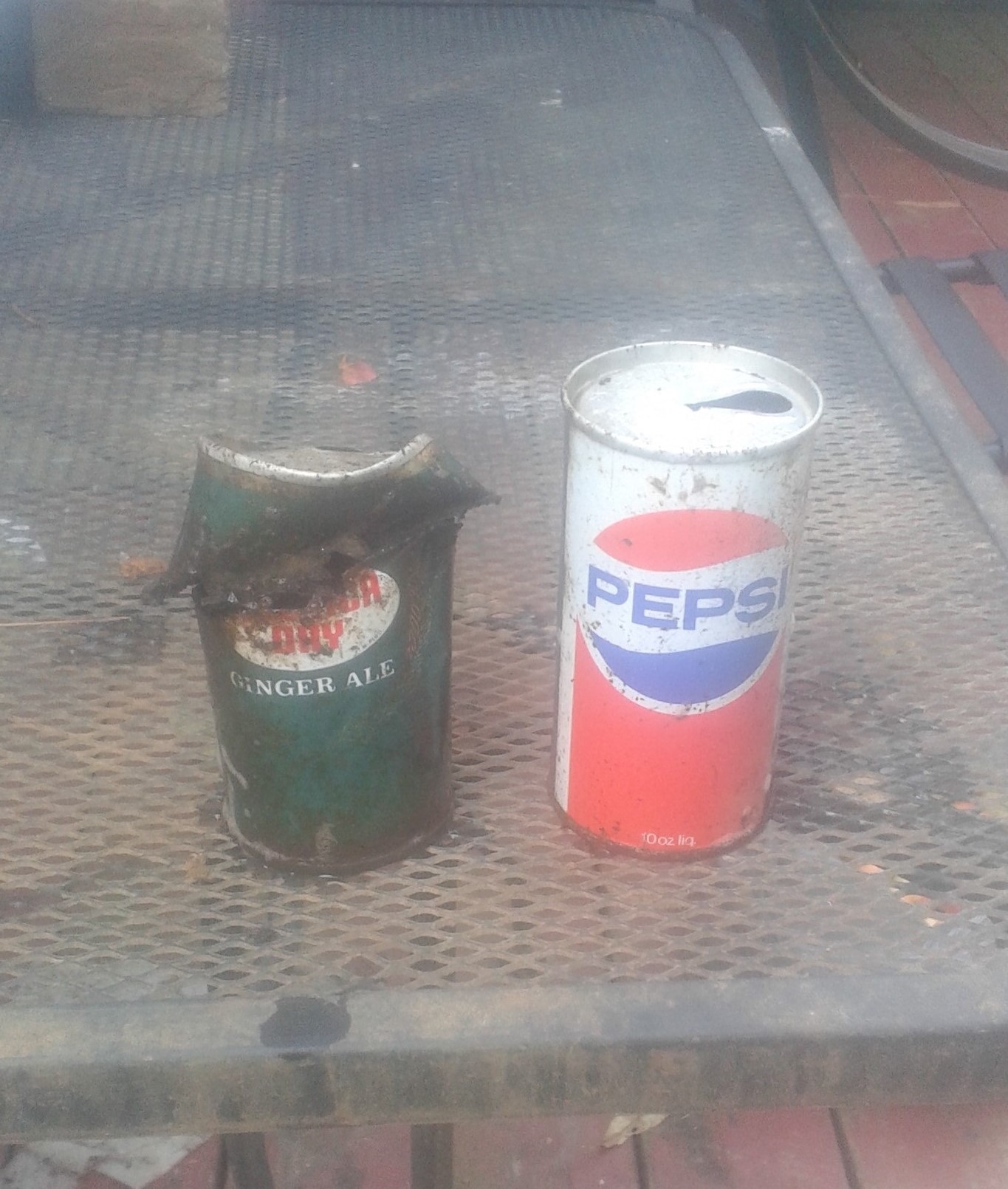 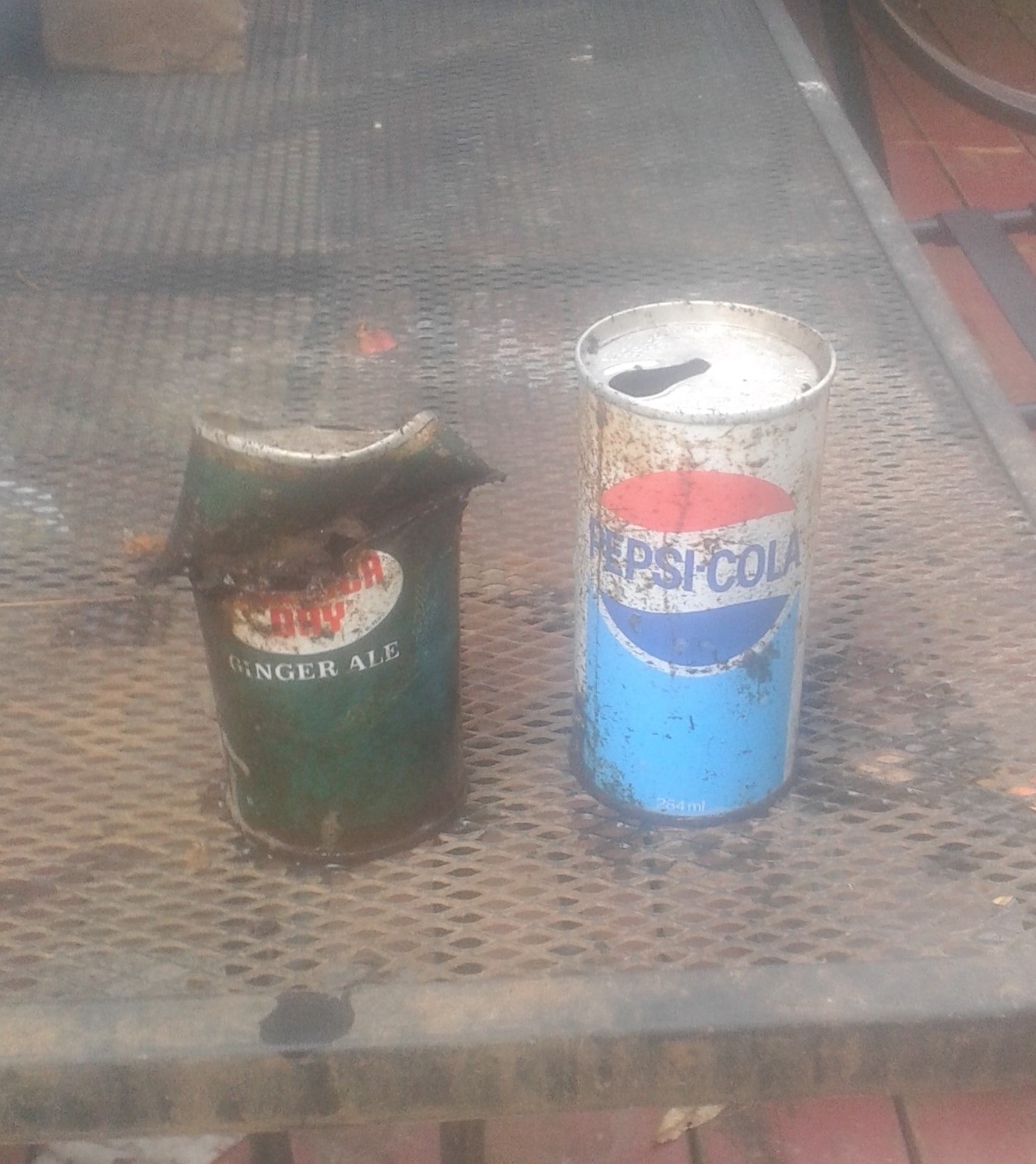 went back to main can dump once again to see if anything else was still there , sure enough I filled a bag with stuff , a couple cans I hadn't seen before

not much in the way of bottles , a couple modern jars and a clear no deposit bottle

mysterious orange can , its on the far left second pic , not sure what brand it is , if anyone can id it ? its a flat top so thinking a store brand ?

never found the Wilson's old fashioned cola before , they were mostly known for there ginger ale so not sure how common it be , a lot of colour still there 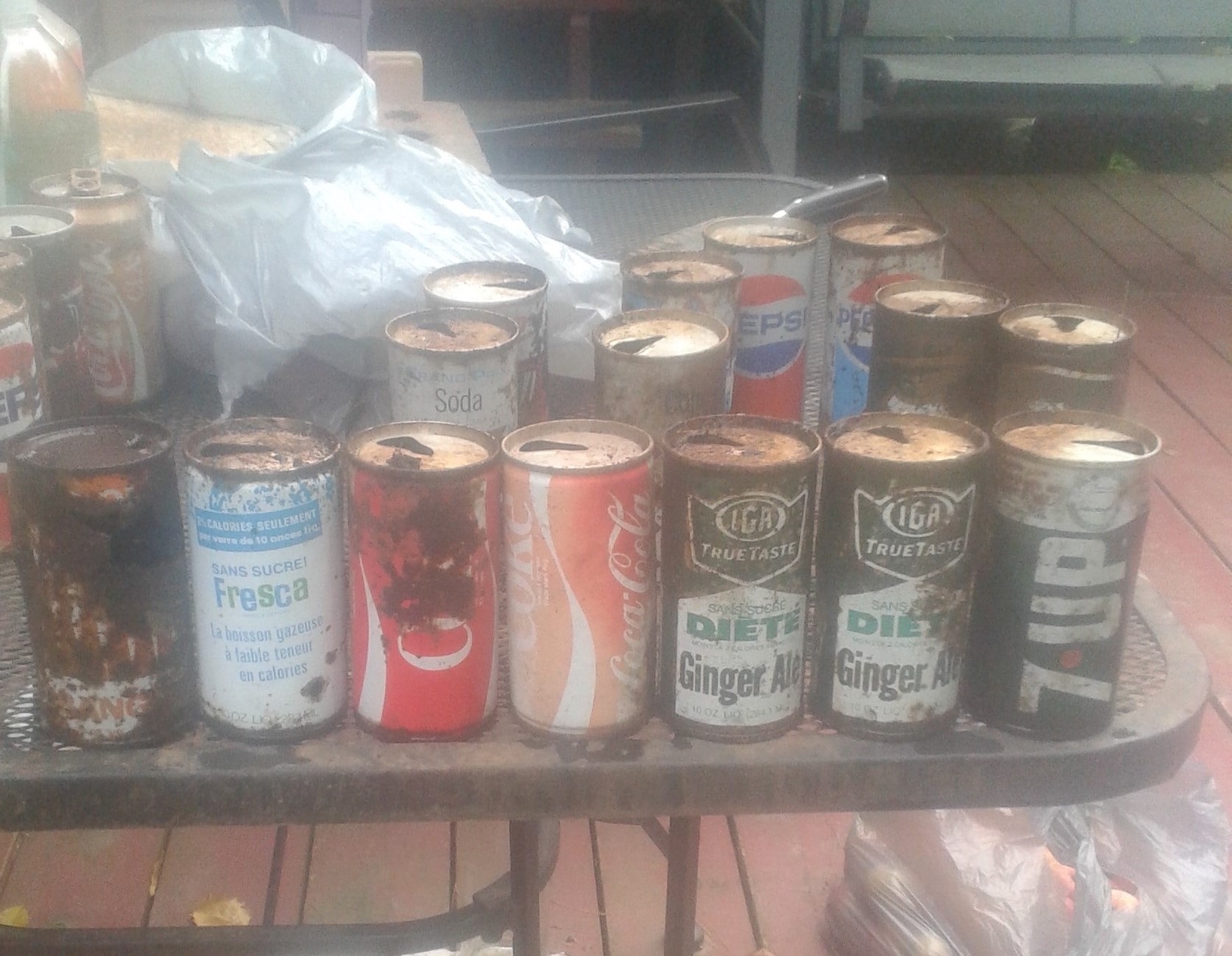 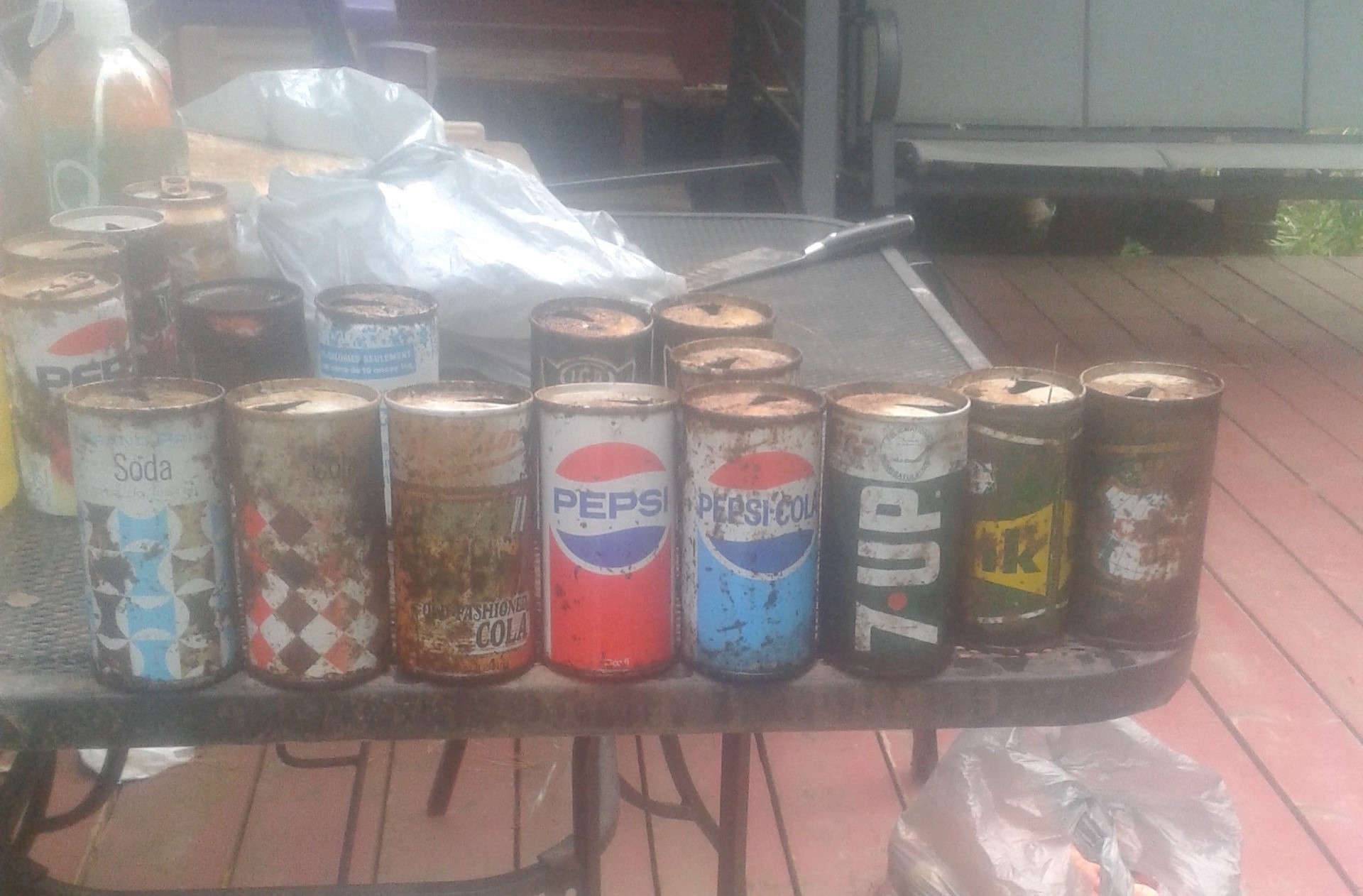 also went back to camp site woodlot , didn't find much but found 2 flat top cans - a teem and a Tahiti treat ( which is pretty much rusted away ) , the teem was just poking thru some leaves , not sure how I spotted it as a lot of the leaves are yellow and nothing else nearby

however a lot of the original colour remains on the teem , 2 lemons are yellow and 1 faded . still only ever found the teem flat top twice and other can was way more damaged . 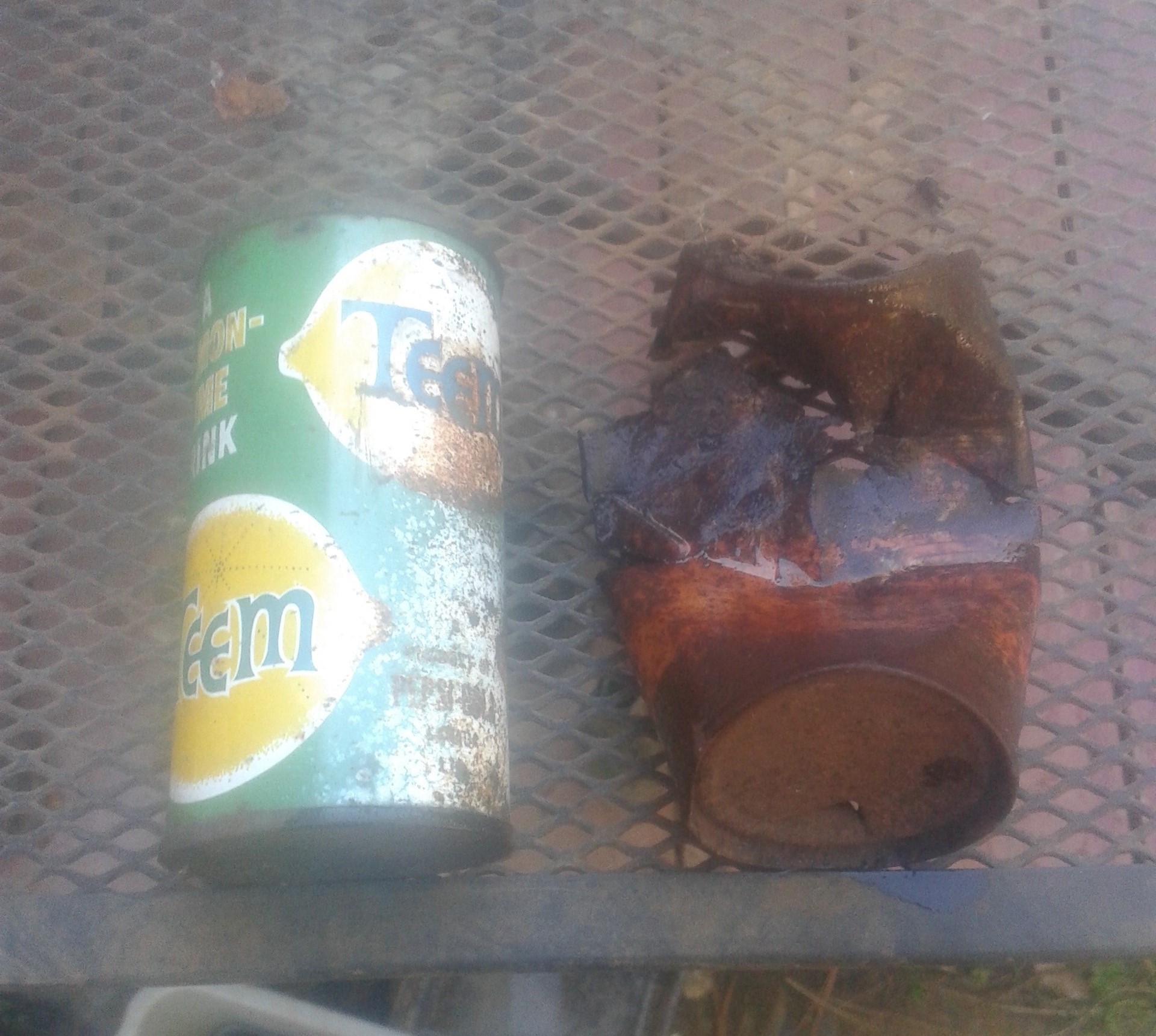 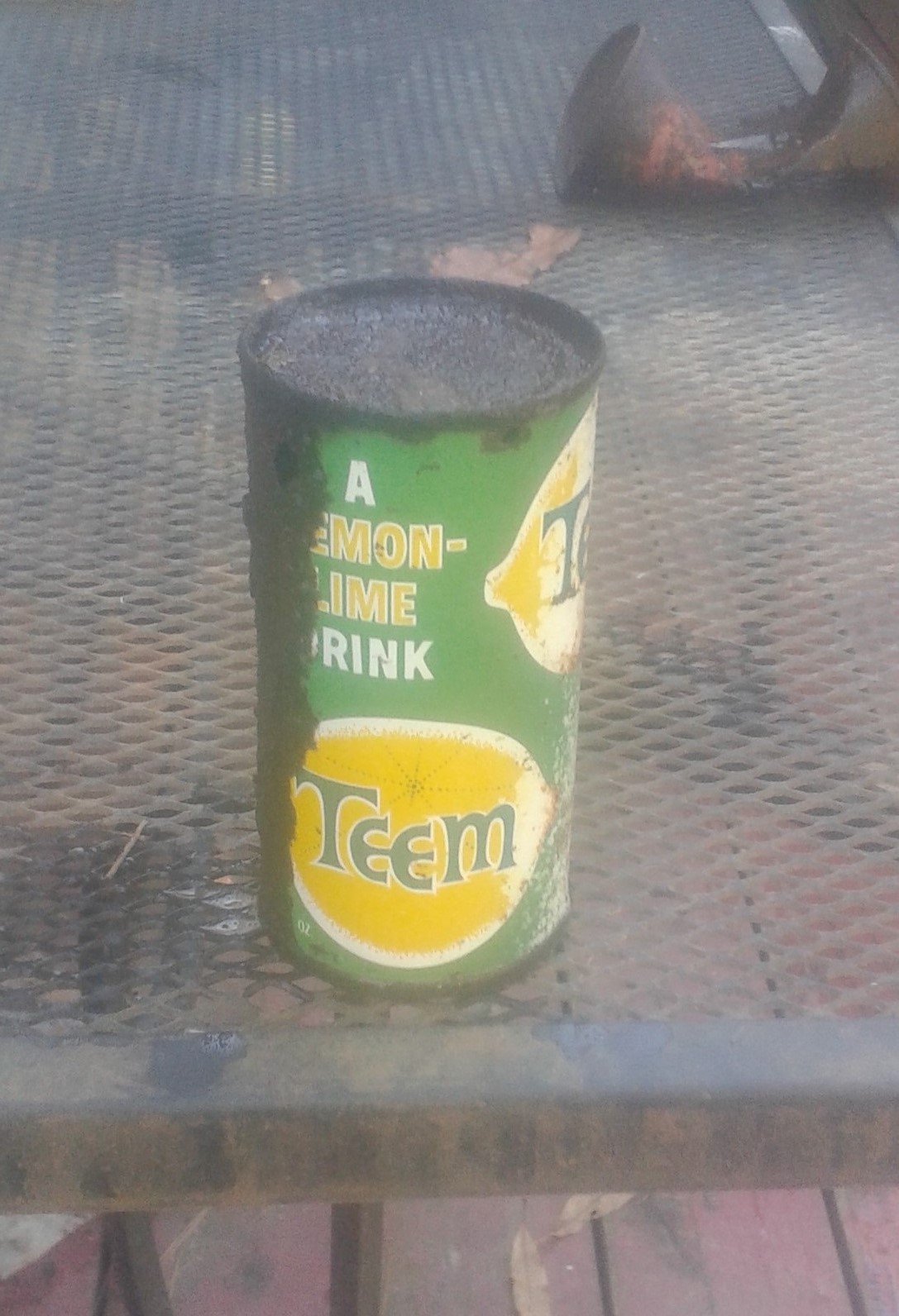 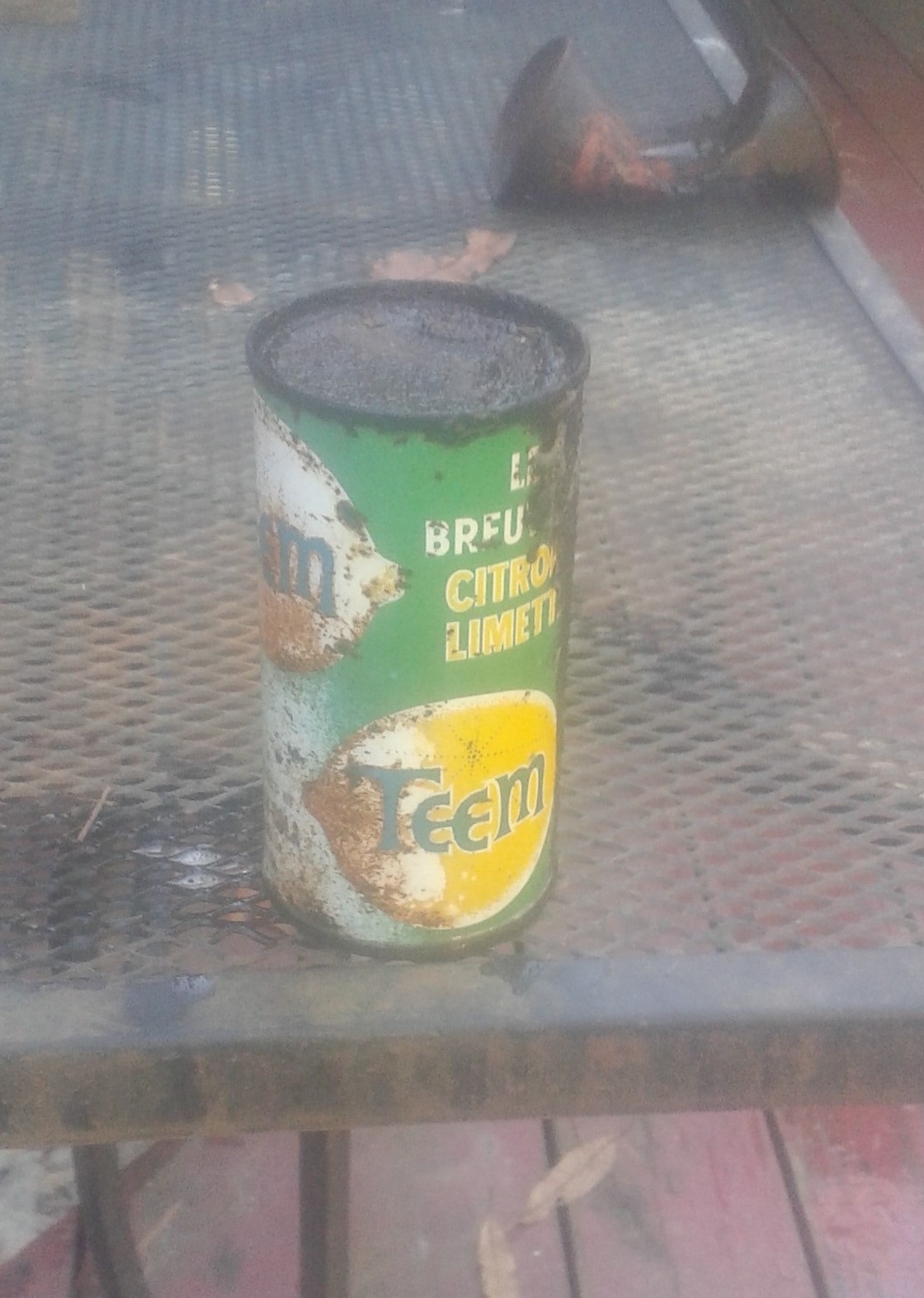 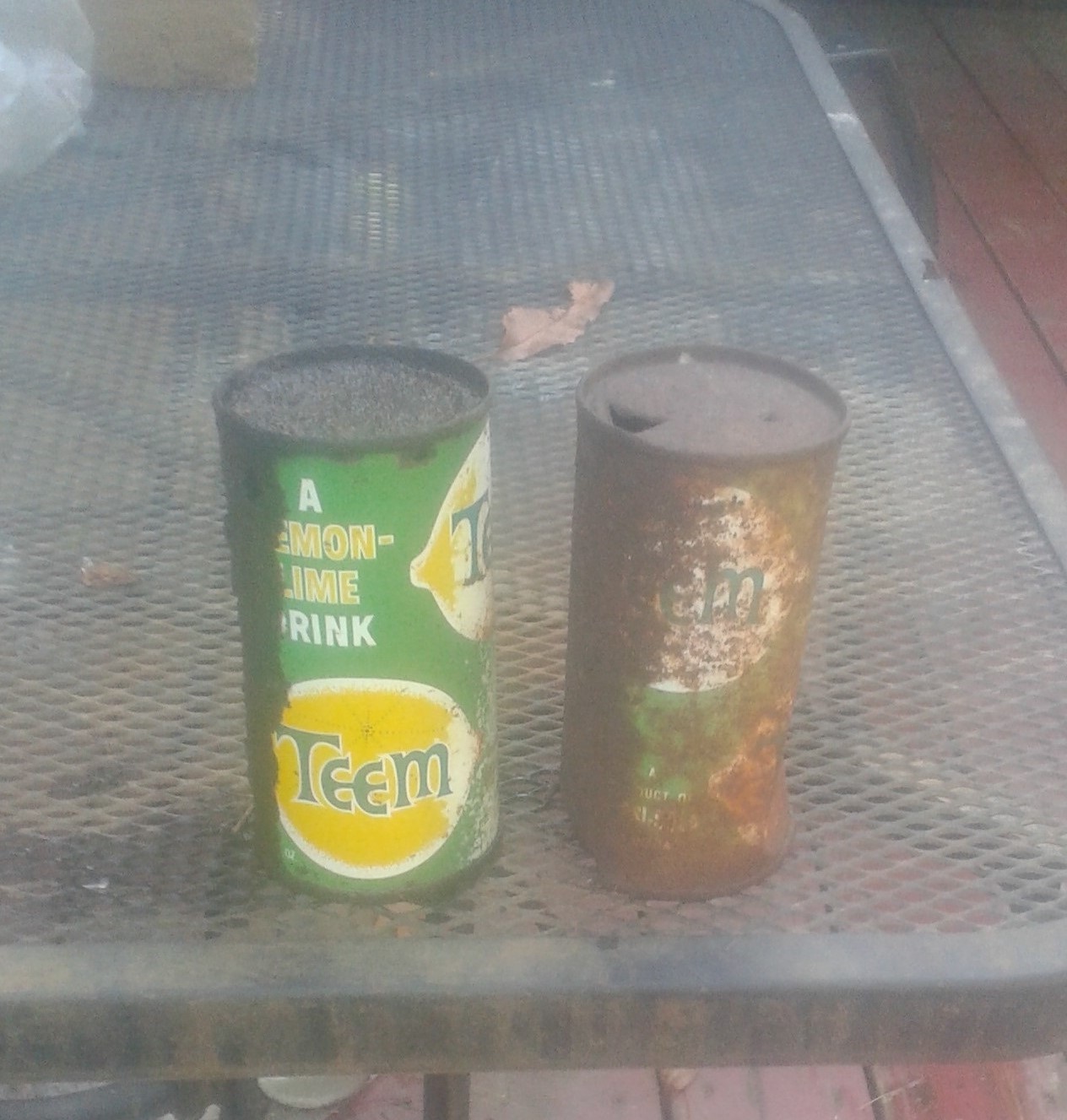 poked around some old highway embankments north of where I live , so was the old highway before new highway was built .

found a few things but nothing too exciting

some aluminum cans , pepsi seemed to be a lot in this area for some reason and a Fanta - tangerine , one pepsi has a just for laugh's festival ( montreal ) on back from july-august 1992 , not sure if this can is from quebec ? or sold in rest of Canada 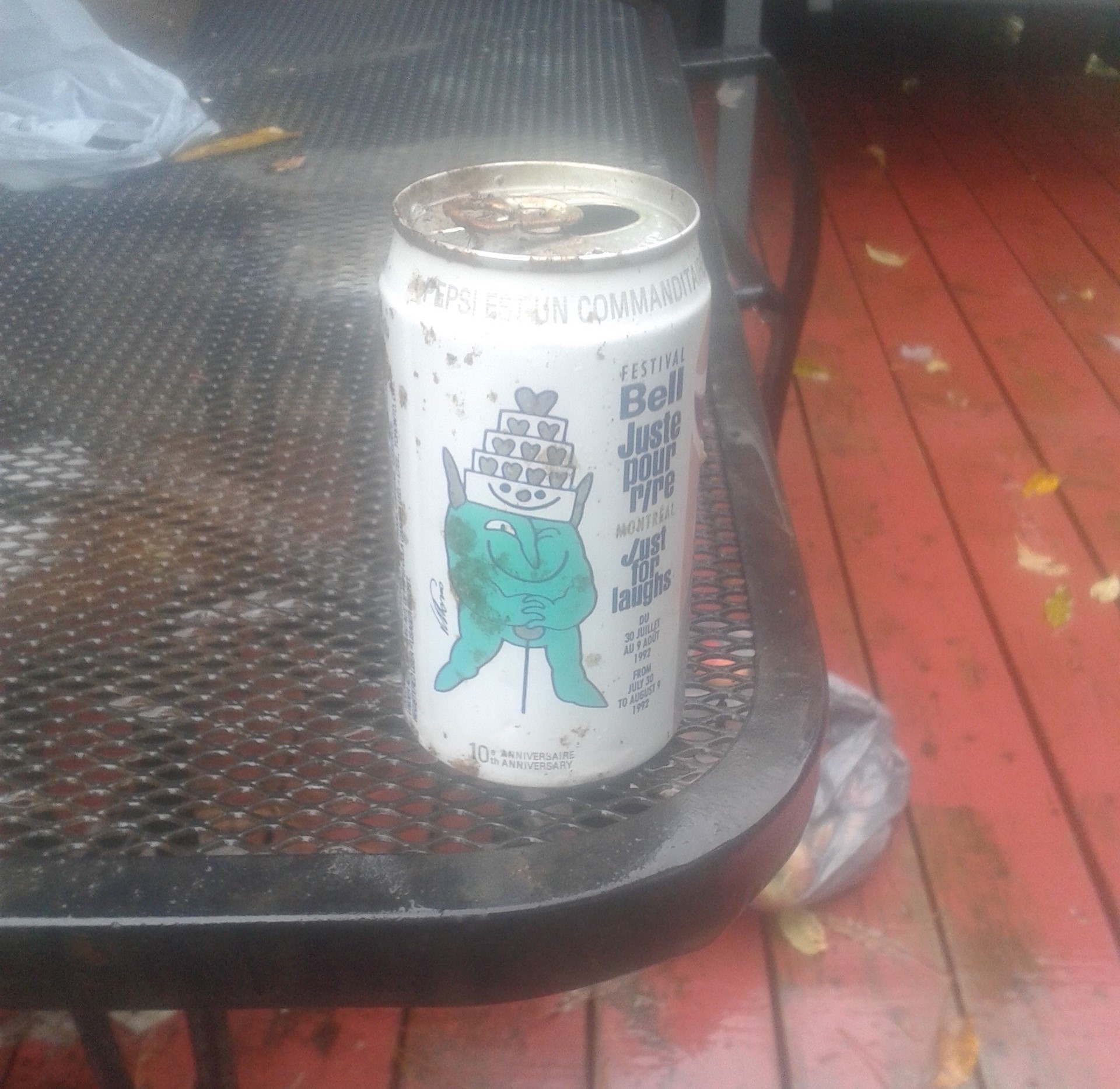 cleaned up main location and checked to see if there was anything I has missed , was a couple things

cans found were - coca cola , pepsi , Canada dry , Yukon club - cola , 7 up , grand prix - cola , cavalier - ginger ale , and another odd Wilson's Toronto can , this one for " Charlies - Orange its one in middle , not a lot remains but enough there to read its logo

also found a 7 up cap inside a glass jar , wondering if its from the 7 up bottle I found there earlier this year ? 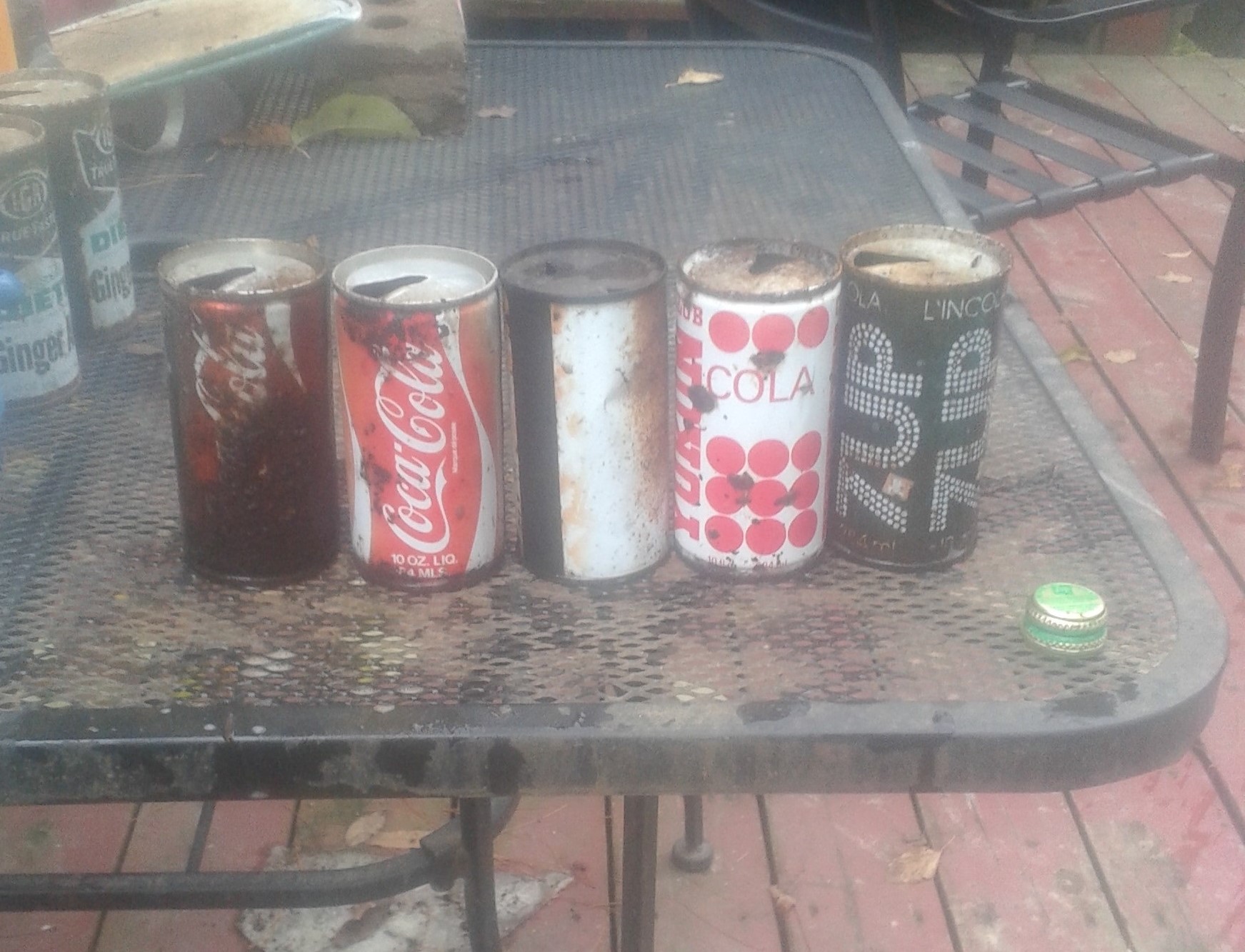 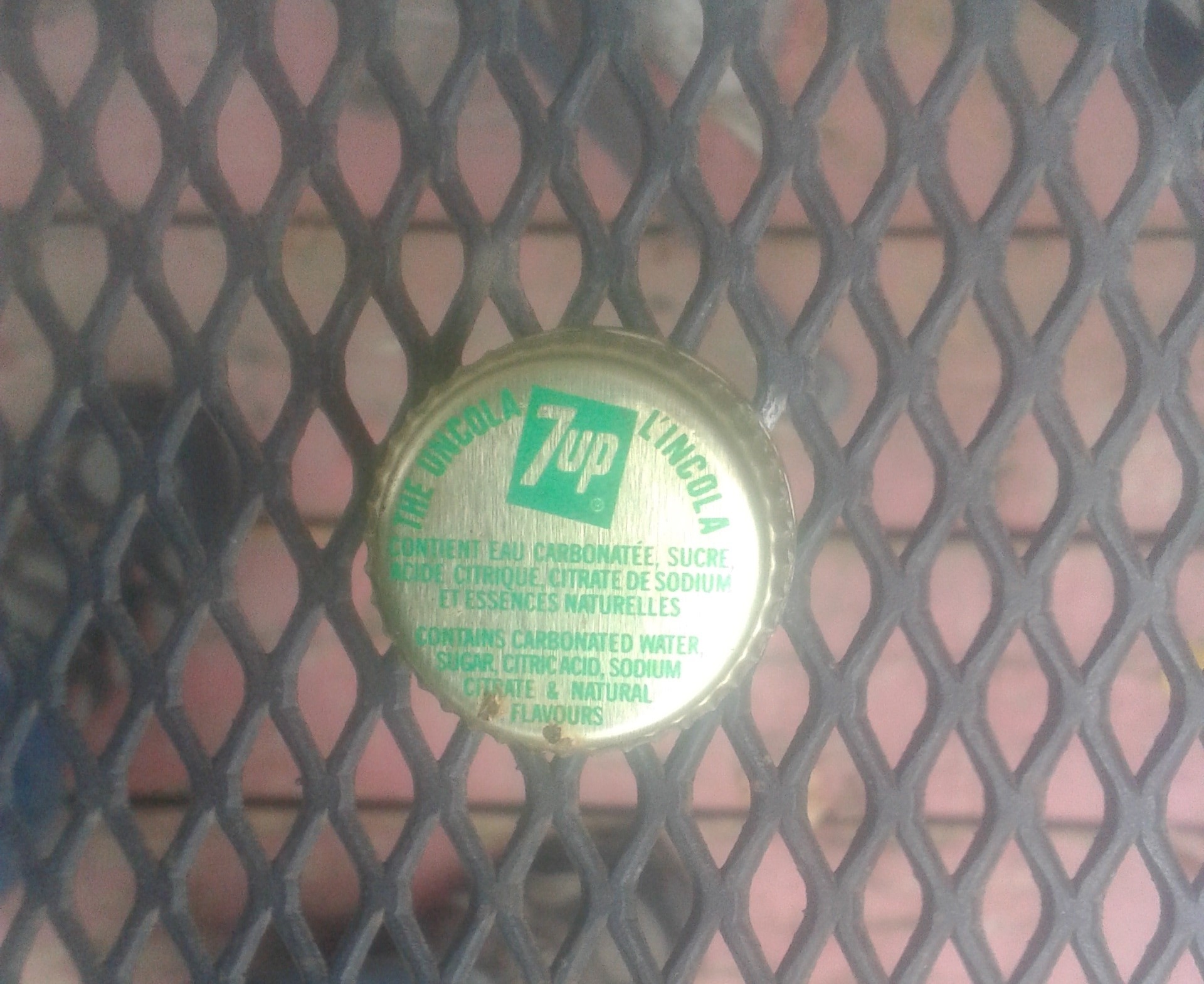