Good job Steve, great information. Have you or any body you
know searched the glass house site looking for shards of glass that
may show types and colors made there? Or is it private land with
no trespassing signs in place? Your aerial map shows what looks
to be open fields and woods.
R

Great info and bottles. I am so happy to have the Jenny Lind you gave me for Christmas! It's really neat to see pictures of others.
S

Hi laur your bottle has a lot of early glass history about it.
Samuel Huffsey lived a long time and worked in over twenty glass works in his lifetime.

So the factory site is under the expressway. Just great.
S

Yes sandchip the works were phyisically located under the west bound lanes of the AC expressway.Some digging on the site
during the widening of the expressway did yield quite a bit of cullet.I doubt one today could dig near there because I am sure the state owns the
right of way at least a 1oo or more feet off the road. 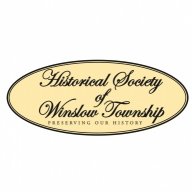 The Historical Society of Winslow Township has precious little information about the glassworks that were located here (and nearby). We know a little about the Winslow Glassworks and the Williamstown glassworks (thank to the South Jersey Magazine series authored by my uncle H. Keith Bodine) but embarassing little about the rest. Of specific interest getting started in the information gathering process would be a listing with accurate information about their locations, ownership, when the went into and out of blast, products produced,. We do have the Heximer survey info for Window, Wilton and Williamstown but little else.

Spotting your January 23, 2010 post clearly identified you as someone who might guide us to sources of information from which start compiling a collection of information and perhaps some artifacts. I also have some specific questions regarding your 2010 Isabelal post:
We have some script from ether the Brooklyn or New Brooklyn Glassworks among our artifacts. Did they both have company stores? If only one had a store, I guess we can assume that that is the one who issued the script ..... or was script redeemable in other places? As you can tell, we are really ignorant about our own glass history.

Any information you can provide would be appreciated.

Jack, I'm not sure if Steve monitors this site anymore or not. I haven't seen him post anything in a while. Best of luck in your research.