I was taking a nature walk and found my first two bottles. I have no knowledge of identifying bottles or even attempting to date them. I was hoping someone would be able to identify and possibly them. Thanks!

EDIT - I believe from personal research it's a vintage beer bottle. Still trying to figure out more information,

Hey Psycho. Welcome. Congrats on your first couple of bottles. I agree with botlguy about what you found. Not the oldest or rarist but everyone starts somewhere. I wish you the best of luck finding and learning more and more. 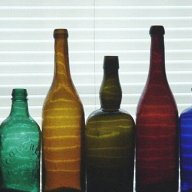 Hi Psycho,
Your beer bottle is a type very popular in the late '60s and early to mid-1970s. Amber "beer bottle brown" glass, usually a shorter or 'stubby' style; often with that 'corrugation" ,"pebbling band" or "band of stippling" around the lower heel area; a phrase having something to do with Recycling, littering, etc. and an embossed graphic, like a crest or some other design on the side which is probably the trademark of a particular brand of beer. There were lots of slightly different ones made during that time. It would have had a paper label showing the brand of beer. I remember seeing lots of those kinds of beer bottles thrown out along the roadsides when i was a kid, riding my bike looking for aluminum cans to recycle! I think the "70" to the right of the "NO REFILL" is a date code for 1970. (It looks almost like 71 to me?) I don't see a glass manufacturer mark on it that would help with ID. Some bottles did, and others didn't. The "29" is a mold number. Not sure about the "5" but it might be a glass plant location code.
The other bottle is a type that usually (not always) held horseradish. It is probably from sometime in the 1950s-1970s.
You must log in or register to reply here.
Share:
Facebook Twitter Reddit Pinterest Tumblr WhatsApp Email Link