Ok, I know kind of what it is, it's an apple tonic. But other than that, I have no information on it at all. I bought it from a collector of poisons and insecticides, but he never knew anything more about it either.

My research has found very few clues or info. Baldwin, it should be noted, is a variety of apple that was grown and popular in the northeast during the 19th and early 20th century. Not found too often nowadays. Used primarily as a cider apple. That may just be a co-incidence or it may be a word play.

I can't find any company info or reference to a "Dr Baldwins" anything. There is a Baldwins Celery Pepsin & Dandelion Tonic which may be known to you, and a Baldwin's Sarsaparilla from West Stockbridge, Mass. Again, might be linked, but can't find anything.

Even the motto was a curious search that came up dry: "The Apple Tree Brand".

The collector I purchased from, thought it possible to be an insecticide, which is why he held on to it, as they were sometimes called "tonics". There is also the possibility this is from England as there is a G Baldwin & Co., which was/is a herbalist from 1844 until today. But an apple tonic? Seems more North East US to me.

Any help with info on this bottle would be great. Thanks! 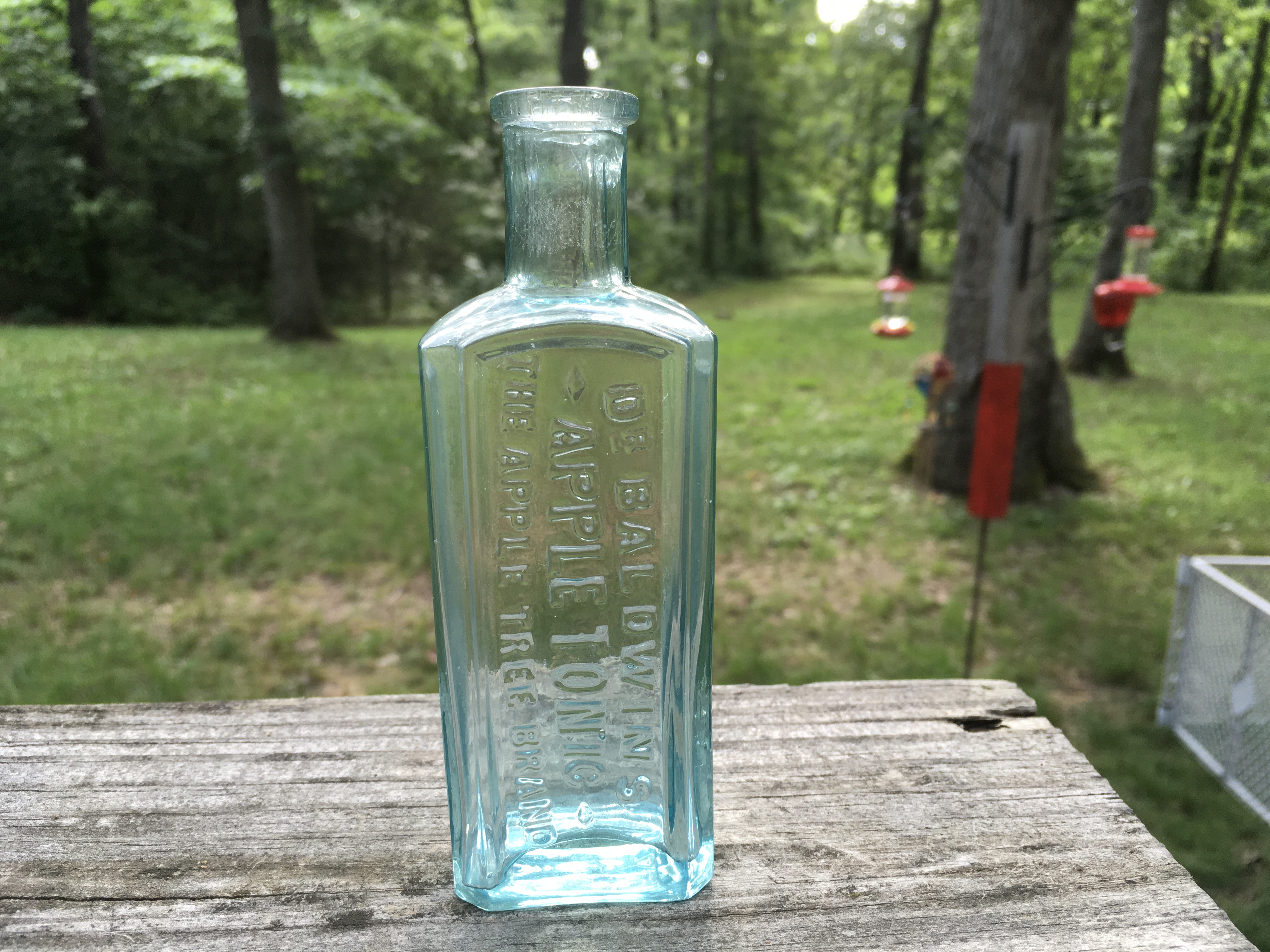 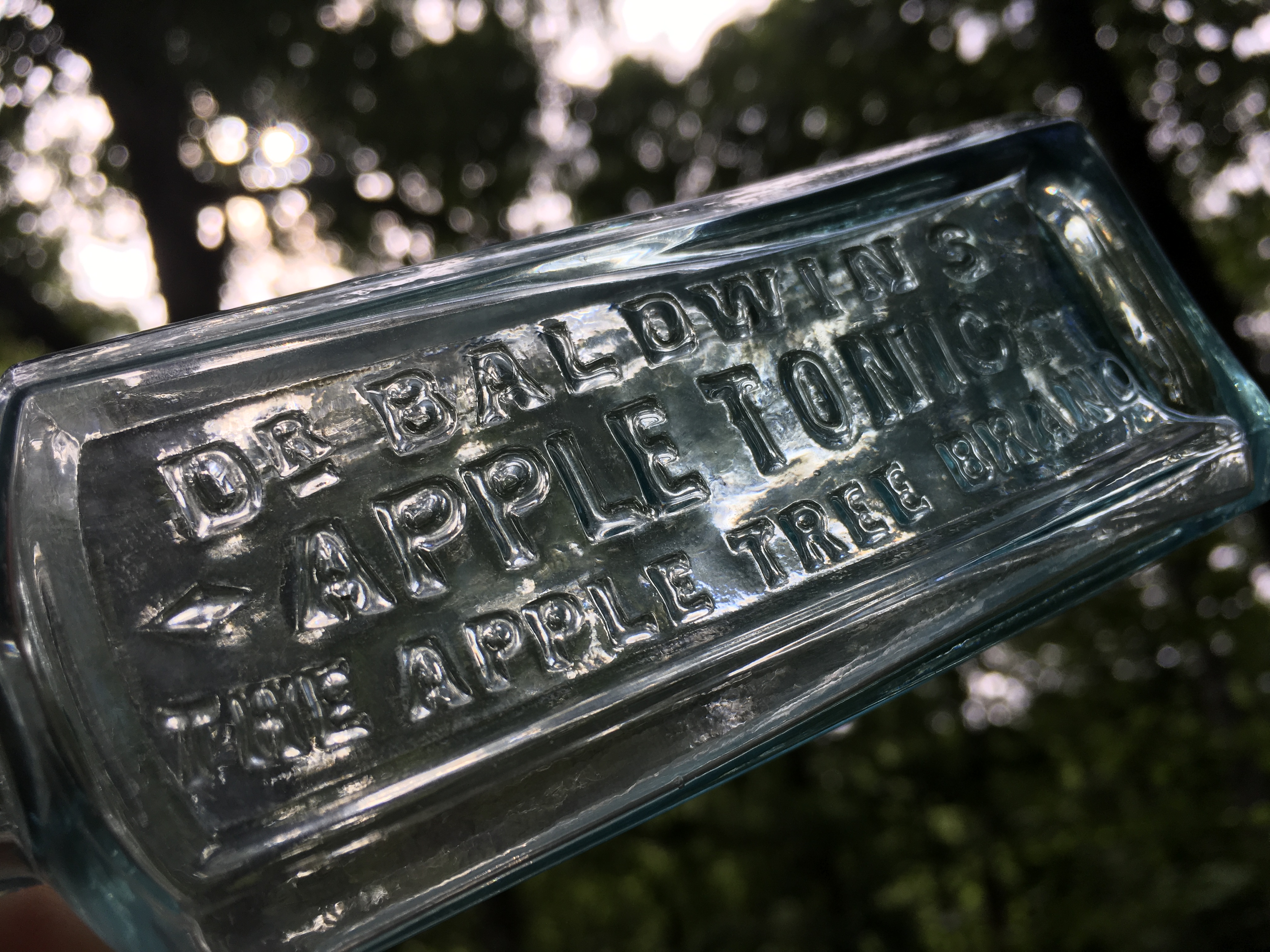 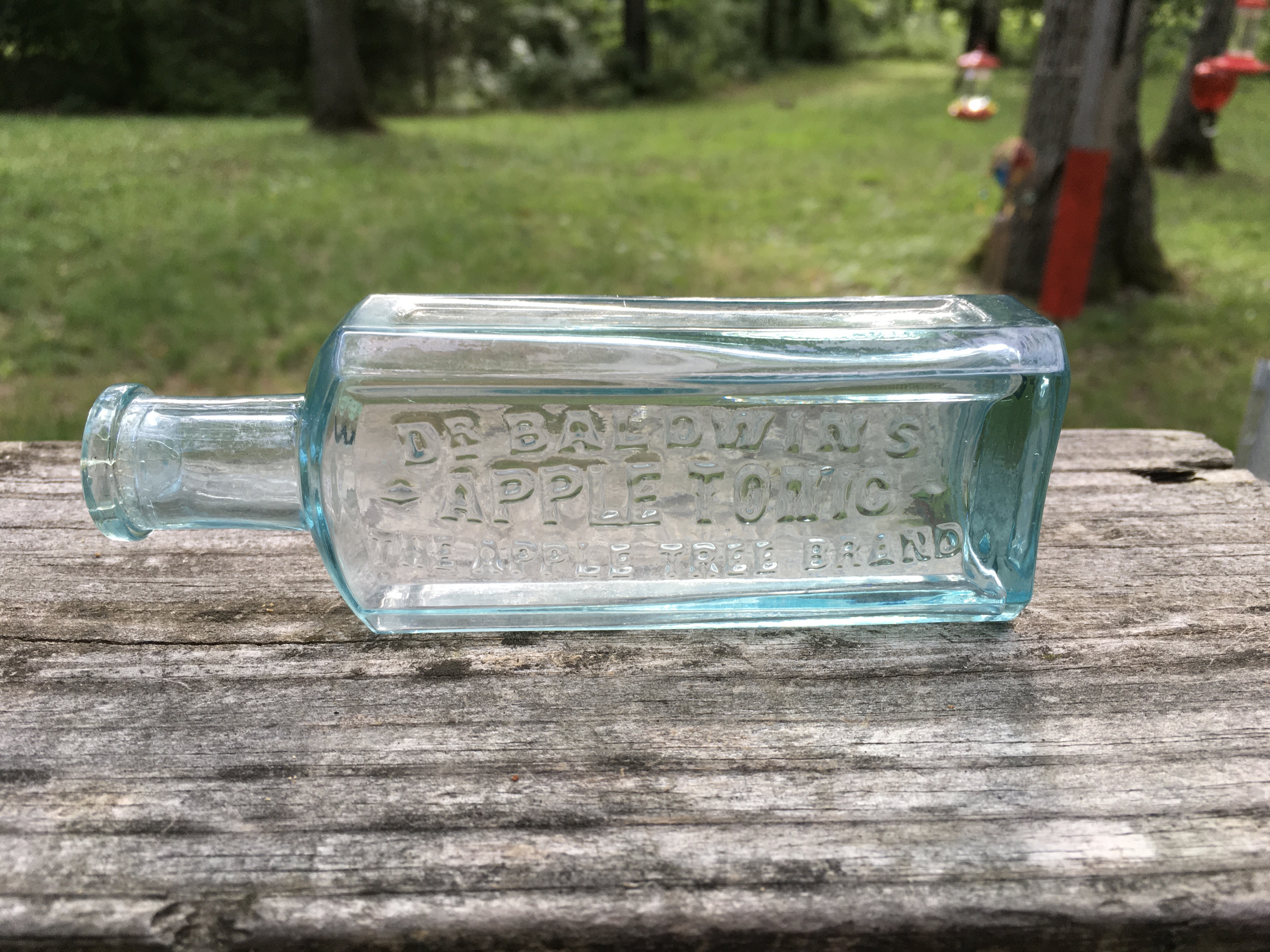 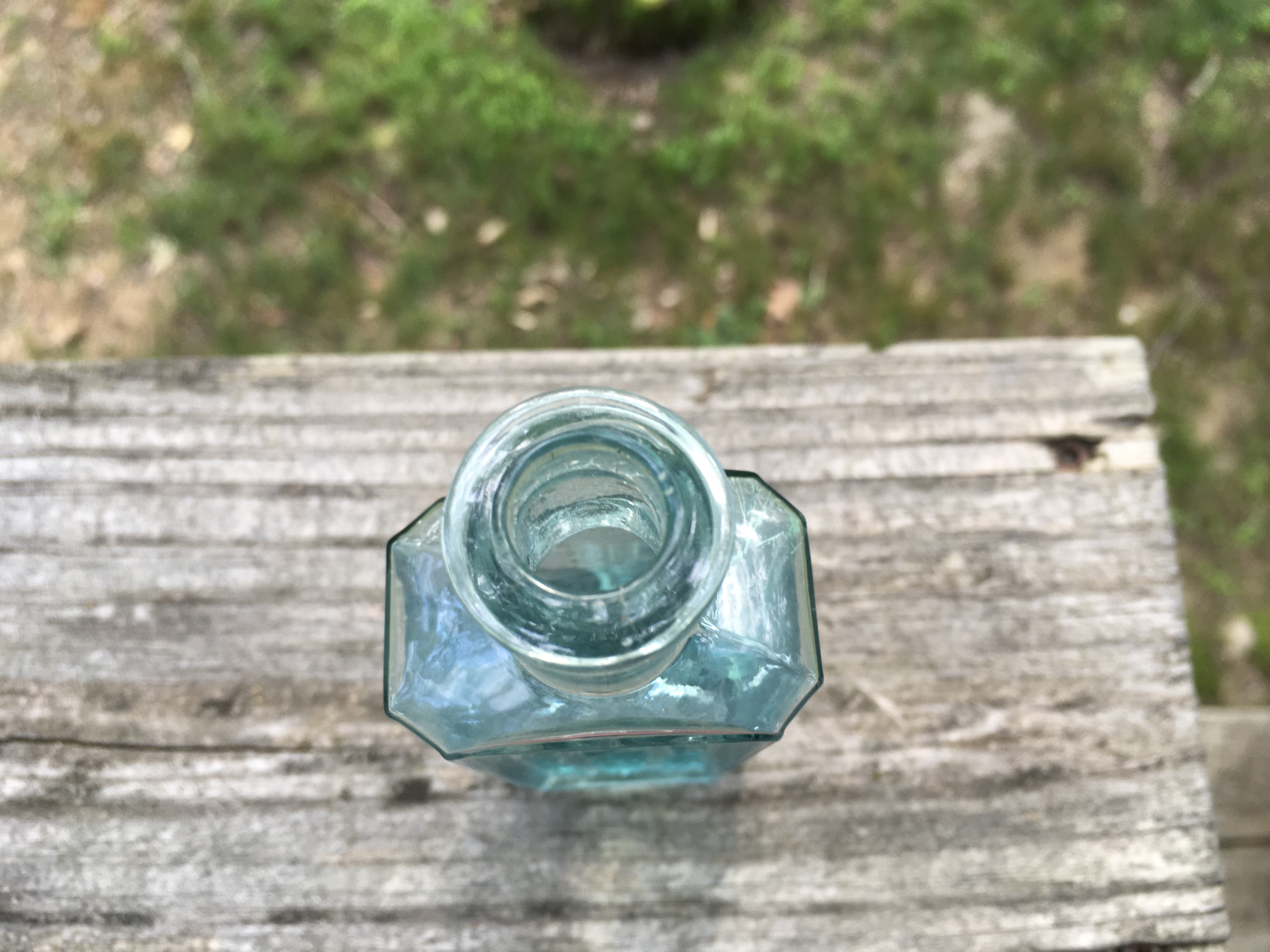 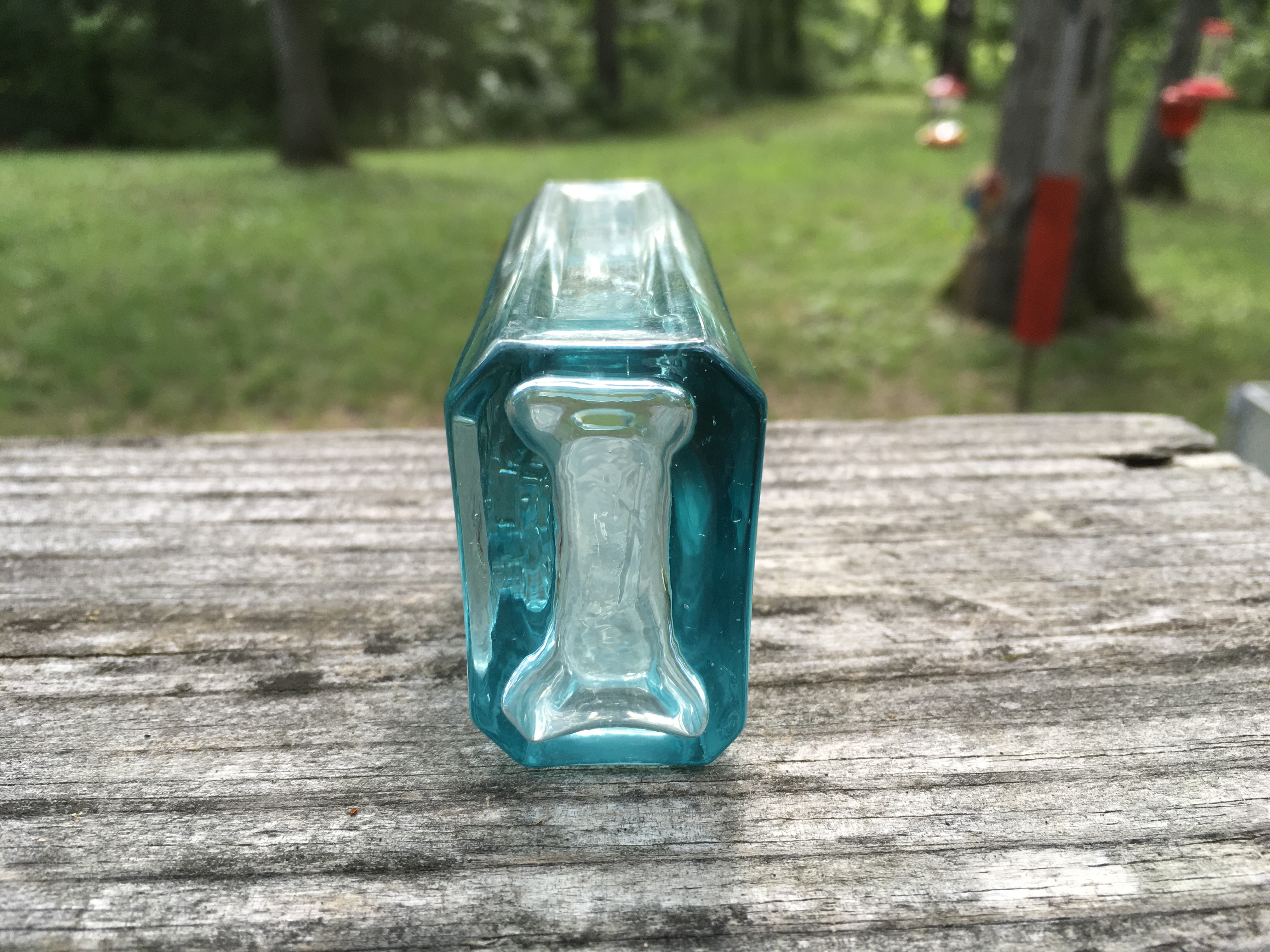 I am almost certain that is a Leeds, England bottle. Excerpt from a 1910 British druggist magazine:

Pharmacists' Mutual Supply Association, Ltd. (P.C).—
Capital 2,0002., in 12. shares. Objects: To take over the
business carried on at 37 Grace Street, Leeds, by A. W.
Simpson, as a chemists' and druggists' specialist and printer,
and the right to manufacture and deal in red poppy corn
silk, Dr. Baldwin's Apple Tonic and Corn Flower Corn Cure.
The first directors are A. W. Simpson, 5 Hall Road,
Rusholme, Manchester, printer to the drug-trade; H. Evans,
Leeds ; and G. F. Storey, Leeds.
J

Excellent. Thanks for that quick reply and info! Was hoping it was a New Hampshire or Vermont rarity, but I'll keep my dreams going. Still happy to have it, a neat bottle from England. I have a couple nice foreign bottles.